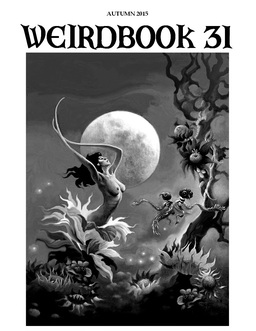 Earlier this month I was very pleased to report that one of the greatest of all weird fiction magazines, W. Paul Ganley’s Weirdbook, is relaunching, with David A. Riley as Senior Editor and Publisher, and Douglas Draa, former Online Editor for Weird Tales, as Managing Editor and Fiction editor.

Last week on his blog David Riley revealed the cover for the upcoming Weirdbook 31, with art by none other than the great Stephen Fabian (at right; click for bigger version).

We are very pleased to be able to reveal the cover for issue 31, the first of the new Weirdbooks. It’s the work of Stephen Fabian, whose art often featured on earlier copies of the magazine.

Indeed, Fabian’s cover art was a hallmark of the original Weirdbook, and I’m thrilled to see that David and Doug have managed to secure him for issue 31. I’m certain it will make old-timers like me feel right at home.

You can see more of Fabian’s artwork in our detailed look at Stephen E. Fabian’s Ladies & Legends last year, and read more about Weirdbook (including their recent call for book reviewers) at David’s blog. They expect to have issue 31, the first issue of the relaunched magazine, available by the end of August this year.