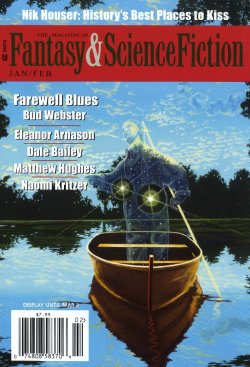 Not every month brings me a great big stack of stories to review. Which is fine. I mean, it’s not like we all don’t have a ton of things to do during December. Still, I did find three stories to tell you about, one them quite good.

Let’s start with the highlight of the December stories, “Prisoner of Pandarius,” by Matthew Hughes in The Magazine of Fantasy & Science Fiction (January/February 2015). It’s a tale of revenge, thievery, and guild politics starring Raffalon, a thief with a ready wit, an overriding sense of self-preservation, and a name more than a little reminiscent of E A Hornung’s famous gentleman thief, Raffles.

Hughes makes no bones about being a fan of, and inspired by, Jack Vance’s Dying Earth. On his site he refers to Raffalon as “my archetypal Dying-Earthish thief.” There’s certainly a Vancian sensibility to the story’s trappings, e.g. a spell with the name “Izzizitz’s Matchless Latch” and the thieves’ organization’s official name of “The Ancient and Honorable Guild of Purloiners and Purveyors.” I’m a sucker for Jack Vance-inspired stories, provided they’re done well. I’m quite happy to write that “Prisoner of Pandarius” is one of those.

My first encounter with Hughes’s fiction was just this past September, also on the pages of F&SF (Sept/Oct 2014). “Avianca’s Bezel,” which I like very much, also features Raffalon. Therein, he learns the hard way the problems attendant with working for wizards.

In the new story, his decision to never again work for a wizard is put to the test when he is defrauded by the Purveyors — i.e. fences — of his guild. An old associate, the sorcerer Cascor, approaches him with a job offer and he reconsiders the hard line he’d previously taken.

Cascor is seeking to stop a wealthy merchant, Olviett Pandarius (whom he’d previously hired Raffalon to rob), from speaking ill of him and ruining his business. He now wants the thief to steal the thing Pandarius keeps hidden away in a secret and magically secured room deep under his home. The problem is the wizard has no idea what the item is, only that his nemesis values it above all else. Despite the scanty information about the precise nature of the target, Raffalon undertakes the task.

Like “Avianca’s Bezel,” “Prisoner of Pandarius” is written with a dry, somewhat dark sense of humor. Just as he’s about to open the final door to the merchant’s treasure, Raffalon continues to contemplate what could still go wrong:

When he heard the final click of a tumbler, Raffalon pushed gently on the door and felt it swing silently inward. Now arrived another moment of truth. His knowledge of how the upper echelons of Caer Lyff society dealt with themselves, added to Cascor’s observations, led him to believe that there could be three things behind the triple-locked, spell-guarder door.

It could be a great treasure, perhaps acquired by one of Raffalon’s colleagues in the Ancient and Honorable Guild; it might be a source of great shame, which the magnate could let no one ever see; or it might be some idiosyncratic pleasure that its owner did not wish to acknowledge to the world.

The third possibility worried the thief, though only slightly. A week or so previously, someone had defeated the wards that protected the old Duke’s menagerie and carried off an exceptionally fierce beast, bred for appetite and combat. The animal was never heard of again. The consensus of opinion in the Guild was that the creature had been lifted by a thaumaturge, either for some horrific spell, or to fee to it someone who had offended the wizard. Once used, it would have been disposed of.

It was just barely possible, however, that Olviett Pandarius, for reasons unexplained, had stolen the ravenous creature to keep it sealed away beneath his bedchamber. Perhaps he threw to it his enemies or his unsatisfactory servants. If so, Raffalon’s assignment was about to take an unfavorable turn.

There are more Raffalon stories out there and I hope to track them down. Hughes writes with a nice wink of the eye and crafts cleverly plotted tales that I find utterly enjoyable.

I’m a little less enthusiastic about the two stories in the December 2014 issue of Curtis Ellet’s Swords and Sorcery Magazine. The first isn’t bad; it just didn’t grab me. And anyone would be hard-pressed to classify the second as S&S, though it is quite good.

The first, “Battle Brothers,” by Australian Timothy Ide, is a clever idea that couldn’t quite sell itself to me in the end. Fergall is a berserker sworn to kill the enemies of his people and Culac, his shield-brother, is sworn to defend his people. Together, for twenty years, they have traveled the lands earning their livings by killing.

Perhaps he’s starting to feel his mortality, maybe he’s just getting a little less sure of himself, but Fergall has been struggling to work himself up into a berserker fury. He can no longer channel Monda, Goddess of the Crows, and slay dozens of foes with impunity.

Unfortunately, at a point when the rage will no longer come even a little bit, Fergall and Culac are hard pressed by a horde of monsters. How Culac helps his companion find his rage is the crux of the story.

The solution is actually kind of clever, but it’s hard to believe that such a secret could exist between two men who’ve been companions on the road for twenty years. It just doesn’t work for me.

“Evilbloom” by Diana Parparita, is set in the city of Malrezo, a Spanish analogue, ruled by a harsh Inquisitore. Consuelo Maria de Esperanza, an herbalist and medicine maker, lives in constant fear of being arrested and turned over to the torturers in the city’s dungeons. When a terrible magical plague arrives in the city, she is willing to risk everything to protect her fellow citizens.

I liked this short piece very much, but it’s not S&S, not that there’s anything wrong with that. It’s just that I kept hoping Consuelo would whip out a dagger or toss a nasty little cantrip once in a while. But, really, it’s a good one and I’d like to read more by Parparita.

So, not many stories, but not a bad bunch. Until next time, just keep reading!

[…] Even in 2015, thirty years after the end of swords & sorcery’s glory days, there are new short stories being written all the time. Each year, several anthologies’-worth of short fiction, once the lifeblood of S&S, still appear in various print and electronic magazines (read my most recent review here). […]