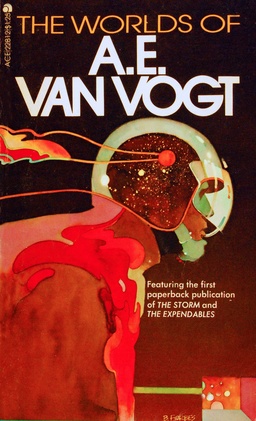 True, he’s primarily thought of as a science fiction writer (when he’s thought of at all these days.) But however you categorize him, van Vogt was one of the most important writers of the pulp era. I looked at one of his most famous novels, a fix-up of his early pulp stories from Astounding Science Fiction, The Voyage of the Space Beagle, back in September, but that’s really the first time we discussed van Vogt at any length.

Well, that leaves us a lot of ground to cover, so we better get started.

Van Vogt’s longer works include some of the most famous early novels in the SF canon, including Slan (1946), The World of Null-A (1948), and The Weapon Shops of Isher (1951). If you’re interested in sampling his shorter work, there are a lot of collections to choose from — including Transfinite: The Essential A. E. Van Vogt (2003), the deluxe, 576-page hardcover collection of his best work from NESFA Press (still in print, you lucky dog.) If you’re looking for something a little more economical, I highly recommend Transgalactic (2006), a handsome trade collection containing eleven short stories and a short novel, The Wizard of Linn, still in print from Baen.

Of course, you know how I feel. If you want to experience Van Vogt in the pure state, the way his original fans did, you should collect pulps, like any decent person. Failing that, I recommend tracking down a few of his most important paperbacks. Besides, that’s the truly economical approach.

I suggest starting with The Worlds of A.E. Van Vogt, a generous sampling of his short fiction spanning 1941 – 1971. It was originally published in 1974 and is still easy to find and very inexpensive. Twelve of the stories within (plus Forrest J. Ackerman’s one-page introduction) appeared in a smaller paperback, The Far-Out Worlds of A. E. van Vogt, in 1968; but this edition includes all of those stories plus three long novelettes, adding over 100 pages. It’s the one you want.

There’s a fine mix of fantasy and science fiction within, as well a nice sample of both his early pulp work and his later fiction.

The celebrated author of The Weapon Shops of Isher, Slan and The Universe Makers, brings to this collection the same unforgettable concepts and the same surprises that have put him among the top names in science-fiction.

This representative collection of 15 stories portrays Van Vogt in all moods, in every stage of his development from 1937 to 1971. Here are interplanetary adventures such as “The First Martian” and “Not the First.” Here are glittering flights of fantasy as “Process” and “Ship of Darkness.” Here are tales of psychic powers as “The Purpose” and “The Ultra Man.”

Here, in one volume, are the thought-provoking Worlds of A.E. Van Vogt.

Interestingly my copy, which I bought as part of a large collection, came with a copy of Van Vogt’s obituary tucked into the first page, clipped from a newspaper.

The Worlds of A.E. Van Vogt was published in January 1974 by Ace Books. It is 330 pages, originally priced at $1.25. The cover is by Bart Forbes. It has never been reprinted and there is no digital edition. Used copies start at 1 penny at Amazon.com.

Van Vogt was an early contributor to the excellent Thieves World series.

And he was a mystery fan. I reprinted an essay he wrote, analyzing the Sherlock Holmes and Solar Pons methods of deduction (see page 18):
http://www.solarpons.com/Gazette_2007_1.pdf

You know, I totally forgot the Thieves World connection! Thanks for the reminder.

I just downloaded the Gazette from that link. I never got to the essay, as I got distracted by the Derleth parody, and then the great Les Edwards artwork. I’ll definitely be reading this over the weekend… thanks for the link!

Those two Les Edwards drawings for the Basil Copper books are outstanding. There’s a lot of Peter Cushing in the Devil’s Claw drawing and a bit of Christopher Lee (and Cushing) in The Final Cases.

The Devil’s Claw is in issue one: Final Cases in issue two. All things Pons can be found at: http://www.Solarpons.com

He was in Thieves’ World?!? How am I not remembering that? (Well, aside from not having read the books since before Bill Clinton was first elected.)

‘The Dream of the Sorceress’ starred Stulwig, the apothecary/healer. Large cast of characters in this one: Jubal, Illyra, Cappen Vera, One-Thumb.

I’ve read everything related to TW, but I really enjoyed the first half dozen books or so the most.