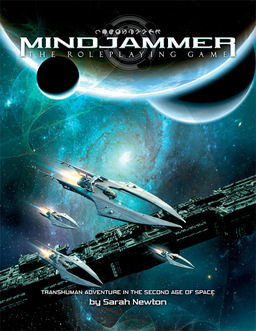 Trying out a new role playing game takes a pretty serious investment of time and energy, and I don’t do it often. I think the last time was probably Pelgrane Press’s excellent SF game Ashen Stars, which turned out to be worth the investment.

A few months ago, the talented Sarah Newton sent me a copy of her ambitious new RPG Mindjammer, and I found myself intrigued. Early this year, it beat out 13th Age, Hillfolk, and other great games to win the Griffie Award for Best Roleplaying Game, which only sharpened my interest.

So over the last few weeks and months, I’ve been digging into it. And I’ve come to the conclusion that this is a really terrific SF role playing game, with a flavor all its own.

Mindjammer describes itself as a game of “Transhumanism Adventure,” which in practical terms means it’s a mix of science fiction and superhero gaming. Hyperadvanced technology, synthetic intelligence, cybernetics, and ancient lost tech have changed what it means to be human, opening up a wide range of fabulous and inventive skills for your players — things like Xeno-empathy, Starship therapy, logic shields, and many others. It makes character generation a lot of fun, and really gets players thinking about the type of universe they’re about to step into.

And what kind of universe is that, exactly? One where humans mingle with divergent hominids, uplifted animals, synthetic beings, and stranger things. Players can even play a sentient starship — which may give you some idea of the scale and ambition of this fine game.

One thing I like — a lot — about Mindjammer is that it’s not just another bleak dystopian setting. Not that there’s anything wrong with dark and gritty settings for SF RPGs, but the market is flooded with them.

Sarah’s almost unique twist here is that the players — and the civilization they’re a part of — are on the threshold of a fabulous new era. The discovery of FTL has triggered a second great explosion outward into the darkness of space. Here’s a sample of the back cover copy:

Never has there been a greater time of opportunity. Old certainties are dying; the universe is in flux, and for the first time in ten thousand years no one knows what the future will bring. So charge your blaster, thoughtcast your orders to the starship sentience, and fire up the planing engines — come and defend the light of humanity’s greatest civilization as it spreads to the stars!

Click the image at right for the complete text.

Mindjammer takes place over 10,000 years in the future. Long ago galactic civilization, an ancient human culture known as the New Commonality of Humankind, used slower-than-light travel to spread out from Manhome, the solar system of Old Earth, over many thousands of years, gradually settling a sizable segment of the galaxy. The result is a vast and non-homogeneous interstellar tapestry of humanity. The Core Worlds are heavily industrialized and highly advanced, filled with nearly incomprehensible tech. But venture into the frontier and you find far more rough-and-tumble worlds.

But now the Commonality has cracked the secret of faster-than-light travel, and it has triggered a new era of rapid outward expansion from Manhome, re-discovering numerous lost colonies, generation ships, and stasis ships scattered across the stars. One of the wonders of the Commonality is the Mindscape, sort of a souped-up Internet: an enormous networked consciousness that links citizens via neural implant. As the Commonality expands, re-discovering and absorbing more human worlds from the great Diaspora, so too grows the Mindscape.

All is not peaceful in the Commonality, however. Everywhere there is turmoil, suspicion, and even open conflict, and the Commonality has responded with the creation of specialized military units. Author Sarah Newton, in a Black Gate post shortly after the release of the game, described it this way:

Two centuries ago, the secrets of faster-than-light travel were discovered (under very mysterious circumstances) and suddenly humankind was able to travel out to the stars in search of those lost colonies established millennia before.

What they found astounded them. The galaxy was alive! Thousands of worlds, settled by humankind and its descendants. Some had preserved technology and a knowledge of their origins; others had fallen into savagery, struggled to rise, and even fallen again. Reformed as the New Commonality of Humankind, Old Earth announced an Expansionary Era, a Second Age of Space, and immediately set about reintegrating these lost colonies into its burgeoning civilization. Some welcomed the Commonality with open arms, but just as many saw them as invaders from the stars, even an alien species, and resisted violently. Within years, the frontier of Commonality expansion rippled with violence and the conflict of countless cultures.

In many cases, the Commonality found itself exposed to hostile and dangerous memes and cultural ideologies, and formed the Security and Cultural Integrity Instrumentality – better known as SCI Force – to protect the Commonality culture. Mindjammer – The Roleplaying Game provides rules for statting and playing cultures and for integrating culture conflicts, meme warfare, memetic combat, and culture agents into your game. 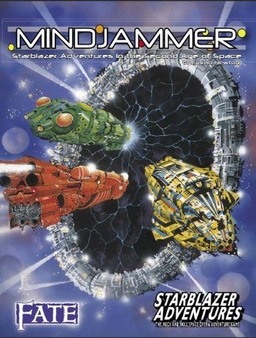 I bought a copy of Starblazer Adventures a few years ago, and was surprised to find the book packed with black-and-white comic art. Turns out Starblazer was a British small-format comics anthology published bi-weekly from 1979 to 1991; the game picked up on the aesthetic of the comic, where “Gigantic fleets prowl the starlanes, mysterious aliens devise inexplicable fates for humankind, devilish scientists operate enormous engines of destruction and swashbuckling princes defend their world from ancient empires.”

A fascinating and fun game in its own right, but the comic sensibilities struck me as a strange foundation on which to build a Transhuman setting like Mindjammer. Seems like the publishers agreed, as for this second edition they have jettisoned the Starblazer license and setting, and launched Mindjammer as a standalone game (although it still draws on the FATE system.)

Two years ago, Sarah Newton also wrote the first novel using the setting: Mindjammer (August 9, 2012), which we covered here. The book is still available and makes an excellent introduction to the system.

See more details — including the high resolution, full cover map of Commonality Space used as the endpapers for the hardcover edition — at the Mindjammer Press website.

In addition to the fine imagination and top-notch writing at work, the new edition of Mindjammer is packed with high quality b&w artwork, detailing everything from character studies to much of the weapons, gadgets, and armor, and even the combat suits. In every respect, it is a first-class production. Do yourself a favor and check it out today.

Mindjammer — The Roleplaying Game: Transhuman Adventure in the Second Age of Space was written by Sarah Newton and published by Modiphius Entertainment on March 31, 2014. It is 497 pages, priced at $54.99 in hardcover and $29.99 for the PDF. Get a free preview of the PDF version at DriveThruRPG.

See all of our recent game news and reviews here.

[…] that you’ll still get all the great sci-fi gear you also get in games like Ashen Stars and Mindjammer — things like stun batons, plasma rifles, flamethrowers, and even railguns. But you’re […]