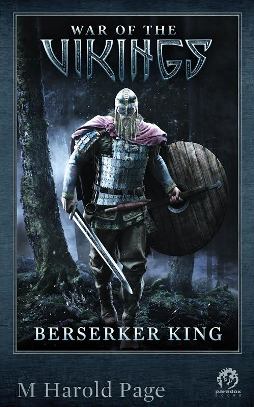 Sometimes it’s worth being a historical novelist just for the joy of the research:

The shieldwall halted just out of arrow range. A tall Viking—a chieftain, judging by his red cloak and the eyepieces on his helmet—took his place in the middle of the Raven Sisters. Whirling a spear in each hand, he stamped and stepped to the rhythm of the war chant.

“That would be Ivar the Boneless, king of Dublin,” said Jarl Vithserk.

“I see him,” said Hardacanut, marking every detail. Slaying such a great chieftain would make it worthwhile coming to this muddy, rain-blighted island.

Viking warriors stepped out of the front line, shook out their long hair and, bobbing their heads, flicked and whirled their manes in time to the chant.

Jarl Vithserk chuckled. “I have not seen that for a long time.”

(From my War of the Vikings: Berserker King.)

I wasn’t making this stuff up.

A 9th-century Viking saga describes Ermaneric — 5th century Goth chieftain — shaking his hair as he grows battle mad. Germanic guardsmen in 4th century Byzantium shook their long hair in defiance. So did the Lusitani when facing the Romans in 2nd Century BC Spain. The god Thor shook his hair when angry. So did Indra.

Yes, the headbanging we see at Heavy Metal concerts actually goes back to at least the 2nd century BC.

It’s not just a Germanic tradition; it’s an Indo-European one and — I’ll wager —  a Human thing. (I’ll come to the barritus war chant and dance.)

For this fact alone, it was worth forking out for Michael P. Speidal’s book Ancient Germanic Warriors: Warrior Styles from Trajan’s Column to Icelandic Sagas.

Presenting a range of evidence for these diverse styles, from Roman art to early medieval bracteate amulets, and from classical texts to Beowulf, the Edda and Icelandic sagas, Professor Speidel here details seventeen different Germanic warriors styles, including berserks, wolf-warriors, club-wielders, long-hairs, ghost warriors and horse-stabbers, and how they indicate an unbroken continuity of customs, beliefs and battle-field tactics.

Ancient Germanic warriors played a decisive role in historical events from 200 BC, when Germanic culture first became identifiable, to AD 1000 when Christianity swept through the Nordic countries. Arising from beliefs and states of mind, a variety of warrior styles manifested themselves in differences of dress, weaponry and fighting technique.

It’s the kind of sweeping, ambitious book that you just stare at, wondering whether it’s a reprint of a flaky Victorian tome, or whether perhaps the author might have neurochemical difficulties. However, Professor Speidel is alive and well and teaching at the University of Hawaii. His students describe him variously thus:

He’s been everywhere in the world, knows almost every European Language, and had authored tons of books. He loves to talk, but he also likes class discussion.

WOW, encyclopedic knowledge of ancient history. I loved his lecture style, you’ll hang on every word especially when he does those long pauses looking down. He’s a grumpy old man though and has taught for well over 30 years.

I have never met a more kind and intelligent man than him. He makes history fun to learn and his lectures are a joy to listen to. One can learn so much from this man. He made me look forward to coming to school for his classes.

Are you itching to go sit at the back and just listen? I am. He sounds like the type of history professor who belongs in the old Pulps, shaking hands with lost tribes and decoding the Norse runes on Aztec temples while the blowgun darts ping off the carvings.

So, yes, the book lives up to its promise. It’s got that tweed-and-oak-panel historical ethnography thing going for it that you normally get from much older books, but it’s also rigorously researched (at least where it crosses into my own areas of expertise) and very crisply written. It takes you under the surface of History to swim in the dark current of the Germanic and ultimately Indo-European warrior tradition.

It reads like something Harold Lamb might have written. However, the claims it makes are positively Howardian.

The book focuses on Trajan’s column, the 100-foot monument raised by the Emperor of that name in AD113. Snaking up this column is a carved frieze depicting highlights from his campaign against the Dacians (who had made the mistake of not understanding that buffer states are supposed to act as buffers).

The column records Trajan’s Germanic auxiliaries fighting in their traditional styles. Speidel takes this as a window into their world, then levers it open using just about every other source he can get his hands on. The result is mind-blowing.

Speidel sees a cultural continuity between the last heathen Vikings to rampage around the British Isles and the first Germanic tribes to maraud their way into history in Roman times, and further back to Indo-European ancestors.

He spots berserkers — naked and in animal skins — on Trajan’s column. He traces the barritus warcry and war dance from earliest times. We’ve already met his Germanic headbangers. He also introduces us to the importance of well-kept long hair and the significance of different styles.

Some of his claims seem a little wild, though backed up by evidence.

Those chaps being trampled on Roman cavalry tombstones? They’re not being trampled; they’re horse stabbers/hewers, terrifying ultra light infantry who, armed with a special knife with only a rolled cloak for protection, hurl themselves under your horse and hamstring or gut him.

Those descriptions of log-like lances in the ancient texts? They’re real. Some specialist horsemen actually rode into battle hefting lances that were pretty much small treetrunks.

Disorientating and inspiring, erudite and well written, behind its mild-mannered academic cover, Ancient Germanic Warriors spins the kind of a wild yarn of Germanic warriors that Robert E Howard would have loved.

I’ve had my eye on that book for a while now. Sounds like I’ll need to get a copy.