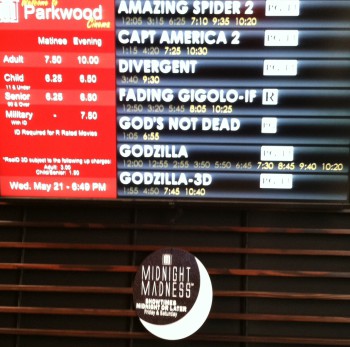 Our intrepid reporter on the kaiju beat, Ryan Harvey, has done a masterful five-part chronicle of Godzilla’s 60-year film history for Black Gate. Last week, he topped it off with his review of the American re-launch of the venerable franchise, which you can (and should) read HERE. I’m not going to retread what he has covered, but I think the return of the King of Monsters is big enough to warrant two commentaries! I find myself in virtual agreement with Harvey’s review, so I’ll just be adding a few random observations. Here are some of my thoughts after seeing the film . . .

First, take a look at the marquee I snapped a pic of while in line to buy my ticket. See the third film from the bottom? God’s Not Dead — no indeed, and just underneath you’ll see that he’s back in 3-D!

Okay, some may take that little joke as sacrilege, but you know I couldn’t pass up that juxtaposition. I also find it interesting that the first two films are Spider-Man 2 and Captain America 2. This week you can add the new X-Men film to the line-up — jeez, Marvel is ruling at the box office. Seems like they are the box office. So this is where it may be amusing to note that Godzilla, too, was once part of the Marvel world.

Marvel Comics licensed that other big green goliath from Toho back in the ‘70s, but they didn’t just do a spin-off comic like with many other independently-owned franchises (G.I. Joe; Star Wars): no, they worked him right into Marvel continuity! He battled the likes of the Fantastic Four. S.H.I.E.L.D. was on his trail as he rampaged across the United States. Spider-Man even had a brush with the atomic-powered lizard! A couple years back, Brian Michael Bendis (the guy who pens, like, half the Marvel comics in recent years) made the wry observation that, although Marvel no longer has the license to the character, they never wrote him out of continuity. In other words, Bendis noted, Godzilla exists in the Marvel Universe to this day. So up there on the marquee with all those Marvel superheroes, he is in familiar company. 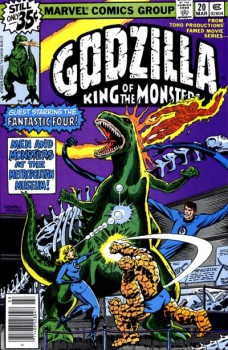 I’ve always been a Godzilla fan, so the fact that he wouldn’t be a guy in a rubber suit this time stirred just a twinge of nostalgic regret. Only for a moment, though, because this film stayed true to the spirit of the original design and made it look awesome (unlike the 1998 film — Godzilla in name only — in every way). Kinda like if you were a fan of Doctor Who growing up. You might find the cheap, rickety old set of the T.A.R.D.I.S. when Tom Baker was at the helm to be quaintly charming, but you probably love the 2005 redesign. What you love and appreciate most, though, is that the new BBC producers kept the classic police-callbox exterior, while upgrading with modern special effects. It’s still the TARDIS.

And this is still Godzilla: Godzilla as empowered by the best of modern big-budget filmmaking. What we saw in 1998 was the worst elements of when Hollywoodization goes bad: meddling scriptwriters, producers, directors, and/or film studios want to totally “re-imagine” the concept, and in so doing they re-imagine what people loved about it right out of the equation.

After the new Godzilla film’s opening weekend, I read that it had set the new record for biggest opening of a Monster Film. Ever. Which movies are judged to be “Monster Films” is subject to debate, but with a $93 million take, it deposed the previous champion, The Lost World: Jurassic Park (1997). And until the new X-Men film opened, it was the number one film in the world. Yeah, the King of the Monsters’ credentials are pretty secure.

Director Gareth Edwards made his name with the low-budget big-monster film Monsters (2010). I saw that and enjoyed it. It was really a romantic road movie, with the invasion of giant monsters as backdrop. The characters were the focus, and both written and acted well. The big-finale monster scene was handled impressively, evoking a sense of awe and wonder. These instincts serve Edwards well for his appointed task of re-introducing one of the most famous monsters of the twentieth century to a new generation.

Critics overall have enjoyed the film; it has an aggregate approval rating of 73% on Rotten Tomatoes. Perusing some reviews, what I found strangely discordant was that two particular criticisms kept cropping up — sometimes in the same review — even though they appear to be contradictory. Some critics opined that they wished the new Godzilla featured more of Godzilla (he doesn’t make a full appearance in all his glory until about an hour in), while others (and sometimes the same critic) claim that the film, as with so many summer blockbusters, was short on character development. So, the problem is Edwards chose to use the first half of the film to focus on his human cast, but he didn’t focus enough on the human cast? I’m having a hard time reconciling those two complaints. 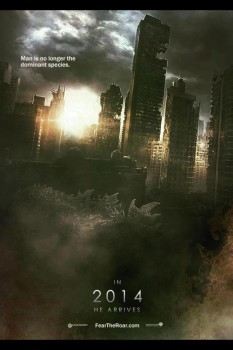 Another criticism that reared up more than once was that the script wasn’t terribly well written, and that it didn’t take full advantage of the talents of its first-rate cast.

Okay, that one I’ll weigh in on, speaking as someone who watched this film in the context of having seen many of the previous films, all the way back to and including the original.

The acting in this film, overall, was as good as any previous Godzilla film and probably better than most. The script — to cut writers Max Borenstein and Dave Callaham some slack — stayed within the confines of the Godzilla milieu. They smartened it up a little, updated it, but I give them tons of credit for not succumbing to the temptation to “re-imagine” it (witness how that went in 1998 with the piece of celluloid fungus I won’t mention again).

Sure, the family plot used a lot of familiar Hollywood-film beats and these often annoy me in other films. I thought they worked okay here. The son estranged from his father because everyone thinks his father is crazy. The dad whose job saving the world keeps him from his wife and child. Etc. But, while these were obviously played for the appropriate suspense/peril and sentimental points, they were handled pretty well (it doesn’t hurt that actors like Bryan Cranston, Ken Watanabe, and Juliette Binoche were selling them). They were neither too cloying nor too irrational. The son doesn’t just totally dis his father for being crazy, but actually agrees to break international laws to help him find closure. The wife doesn’t go into a sobbing “you can’t leave me to save the world” fit but seems to understand that it must be done — indeed, she is in the same boat, being a nurse who must stay at her post to serve a duty larger than herself. Contrast this with essentially the same family drama scenario in last year’s World War Z, where the poorly-thought-out family elements were a major distraction from an otherwise enjoyable film. 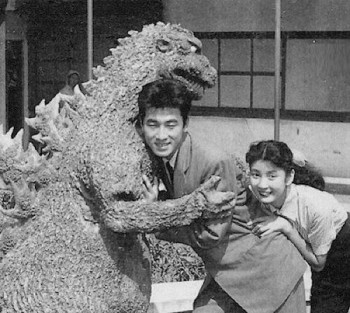 Godzilla films have almost always taken up a lot of running time with what’s going on down here on the human scale, mainly because it’s just not feasible to film two hours of monsters fighting — whether they’re guys in rubber suits or CGI. It has often felt like padding and has ranged from being somewhat charming on a purely camp level to being unrelentingly boring. I didn’t feel that the new movie veered toward either boring or campy. Taken in comparison with other Godzilla films, I’d say that this one was successful in terms of the human plot.

Not comparing it to non-giant-monster films, mind you, but comparing it to other films in the genre, I’d say it pulled off the feat of being engaging and entertaining when the giant monsters were not on the screen. Edwards uses the early acts to delay gratification, building up suspense to the appearance of the titular monster. It was a common ploy back in the days when Godzilla first appeared, but back then it was often done to conceal the weaknesses inherent in the monster effects. Here, when the scientist declares “Let them fight,” we are in for some of the greatest giant-monster spectacle ever achieved: really stunning, magnificent, and realistic looking, while somehow staying true to the original design. I couldn’t have expected a better rebirth of my beloved monster.

What it comes down to for Godzilla fans is that the essential character of Godzilla remains intact. His origin story, even whether he is a “good guy” or a “bad guy,” has morphed over the years, but this film really got to the heart of it, I think. Godzilla just happens to be the biggest, meanest monster on the planet. Being presumably millions of years old and a force of nature, he doesn’t care much about humans one way or the other, any more than we do about insects — until one bites us; then we swat it. But when other monsters show up and threaten to wipe out humanity, he steps in because he’s the “alpha predator” and we can thank our lucky stars that only a city or two got wiped out, rather than all of civilization, when Godzilla dives back into the ocean depths triumphant.

His origin story did get tweaked a bit this time, too. No longer a product of the nuclear testing of the ‘50s (I thought it rather a clever touch that those “tests” are revealed to have actually been our government’s attempts to kill Godzilla), he is one of a species of ancient creatures that lives on the radioactive power of the Earth and can still be found burrowed closer in to the Earth’s core. He is by no means the only survivor of this prior age — as the scientists of Monarch have long known. This gives us the “MUTOs” (Massive Unidentified Terrestrial Organism), and — of course — leaves the door wide open for the likes of Rodan, Mothra, and the rest of the hit parade to reappear in sequels. I say bring ‘em on.

OZ RATING: 4 out of 5 stars (add another half star if you’re a fan of giant monster films; this really is a watershed for such cinema — and if you haven’t already, go back and read Ryan Harvey’s review for a good idea of why!)