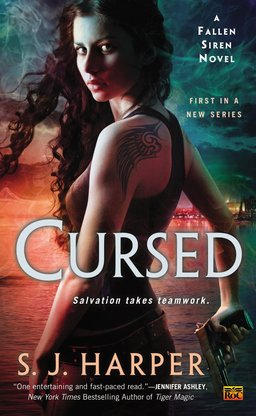 Once in a while, I check in with the paranormal romance subgenre. Most times, I conclude I’m the wrong reader and move on. What makes the check-in worthwhile is that there are books out there like Laura Anne Gilman’s Heart of Briar (which I reviewed here), books that use the conventions of paranormal romance to do something surprising, something stranger or more complex than the usual spectacle of exogamy-as-extreme-sport.

Cursed, the first volume in S.J. Harper’s Fallen Siren series, promises a bit more strangeness and depth than the average paranormal romance does. Harper’s heroine is a Siren, and it turns out there’s more to the Sirens’ myth than we all remember from reading Homer in high school. According to several actual ancient sources, the Sirens were Persephone’s companions and for their failure to save Persephone from Hades, Demeter cursed them. The Ancient Greek and Roman versions of the story disagree about the precise nature of the curse, which is just the sort of wiggle room modern writers love.

Since S. J. Harper is the pen name for a team of established romance writers, their version of the Sirens’ curse is that, until the Sirens have rescued enough innocents from abduction to satisfy Demeter for the loss of her daughter, they cannot die no matter what they suffer and they can never know love without losing the beloved. Losing in the worst possible ways. Harper’s interpretation of Demeter is the winter goddess of the barren Earth, all wrath and vengeance. As when the mythic Demeter would have allowed all humanity to starve while she went on strike, this Demeter has no qualms about destroying innocent men to torment the fallen goddesses who love them.

Do you sense that it’s a problem when the villainous dea ex machina in reverse is more interesting than the protagonists who get most of the time on stage? Yes, that would be the mismatch between book and reader showing. Or it might be an actual weakness of the book, but I don’t have the right readerly dopamine receptors to get romance novels, so I can’t be sure how its merits would look to a reader who does.

Like many paranormal romance novels, Cursed borrows structural elements from the police procedural. In this case, that structure makes perfect sense. Ligeia, currently living under the name Emma Monroe in San Diego, has insinuated herself into the FBI, the perfect resource for someone who needs to spend all her time rescuing missing persons. She’s good at it. After several thousand years of trial and error, she’d better be. She’s good, too, at embracing her human disguise, reveling in the same ordinary pleasures we do. Sometimes she’s a little too good at that, with the result that my suspension of disbelief slipped frequently.

For me, it would have been easier to sustain the suspension of disbelief if all the supernatural elements had been from mythic sources. Instead, Emma is a fluke in her local supernatural community, a goddess cast from Olympus to mingle with pop-culture takes on vampires and werewolves. As nice as it is to see the weres and vampires take her admissions about her supernatural nature with the same skepticism and double-takes as ordinary humans usually take those admissions from weres and vampires, the mashup of Ovid and Hollywood weakened the overall effect of the story, for me.

Emma/Ligeia’s love interest is some kind of hot werewolf ex-mercenary perfect man with an imperfect past. What was his name again? Zack Armstrong. Yes, with strong arms. He’s a decent enough fellow, but he was a little too standard-romance-novel to hold my attention. A troubled male hero who’s less interestingly troubled than, say, Tyrion Lannister or Morlock the Maker just makes me wish I were reading a different sort of book.

Cursed‘s jacket copy suggests that Zack is not merely troubled by the things he did overseas for an unnamed defense contractor, but that he is actually damned for them. The story so far doesn’t bear that out. Perhaps future volumes in the series will. If Zack Armstrong had been literally damned, such that the Siren cursed by Demeter had to come up with some personal foreign policy for dealing with Satan, that would either have caused the entire novel to collapse under the weight of its syncretism or have lifted it into a state of sublime gutsiness. I’m not sure which.

Naturally, the case our two FBI agents must crack is more than it seems. There’s something supernatural to the kidnappings that, as you can’t avoid predicting, turn out to be linked. Agents Monroe and Armstrong have to worry almost as much about protecting the FBI from finding out about the world’s paranormal nature as they have to worry about the actual baddies they catch — and the few baddies who get away so there can be more to do in the sequels. That said, it’s not a bad mystery. What it gave away from the start was how it would have to be paced: this kind of event is about to happen in about five pages, to balance out that other kind of event that just happened in the romance plotline. The particular details of who did what to whom and why, though, did have some nice twists.

The writers who have teamed up as S.J. Harper clearly have chops. The readers they’re writing to will have reason to love this book.

However, if you don’t normally enjoy romance genre conventions for their own sakes, this is probably not your book. Harper isn’t (aren’t?) neck-deep in the tropes and traditions of fantasy literature the way Laura Anne Gilman is. If you’re looking to give paranormal romance a shot because you’d like to understand what its fans see in it, you’ll probably still be happier reading Gilman’s Heart of Briar than reading Harper’s Cursed.