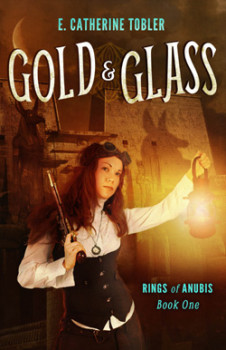 Since I’ve started reviewing self-published books, I’ve received a lot of submissions that aren’t really self-published. Usually these are from small presses and imprints where the authors are expected to do a lot of their own marketing. Up to now I’ve kept to a slightly stricter definition of self-published, but I decided to make an exception this month.

Gold and Glass by E. Catherine Tobler is published by the Masque Imprint of Prime Books. Prime Books is a well-respected independent publisher, mainly known for their anthologies. Masque is their fairly new digital imprint, which, while it does publish general SF/fantasy, focuses largely on genre romance. So it’s not surprising that Gold and Glass is a steampunk romance.

The main character, Eleanor Folley, has for years been haunted by her Egyptian mother’s disappearance in the desert of her homeland, shortly after they discovered the remains of the Lady, a mythic figure from the ancient past. The Lady wore four rings that may have opened a doorway to another time, through which Dalila Folley vanished. Eleanor’s father, the archaeologist Renshaw Folley, believes that Dalila is dead, but Eleanor is not convinced. She has spent years searching Egypt for some sign of what became of her mother, but was forced to return home empty-handed after a falling out with her partner, Christian Hubert.

Virgil Mallory has his own ghost, namely that of his dead wife, Caroline. They were both agents for the intelligence agency Mistral and he found himself looking down the barrel of Caroline’s gun on a mission. He killed her himself after she killed his partner. Or rather, the wolf that lives inside of him killed her. Virgil is a werewolf, who struggles every day to contain the beast, using opium as a tool to keep it leashed. (Interestingly enough, the last, and only other, steampunk romance I read also had a werewolf as the male lead, so maybe a werewolf love interest is standard in the genre.) Virgil still doesn’t know who Caroline was really working for or why she was there that night. He thinks, however, that Eleanor can help him find answers. One of the Lady’s rings has been stolen and Virgil suspects it was Christian Hubert. Even he doesn’t suspect the extent of the connection between Christian and Caroline, however.

The book alternates between Eleanor’s and Virgil’s viewpoints, as well as between the present and the past, filling out the details of Eleanor’s and Virgil’s histories and the unknown connections between them. It is clear early on that both of them have crossed paths with Caroline and saw very different sides of her. The alternating viewpoints, and the past and present scenes, work very well in this novel, with the caveat that despite the headings of each scene giving the time and place, I still got a bit confused sometimes as to when past events happened relative to each other. But by focusing on both the past and present of both characters, the author gives us very useful insight into them. This insight also, from the reader’s perspective, makes the love story more believable, since of course you expect the two main characters, the ones whose tragic backstories you’ve gotten to know in-depth, to get together. I’m not quite sure it’s so believable from the characters’ perspective. I get why Virgil is attracted to Eleanor—there’s a significant physical attraction, he’s been studying her file for a while, and he’s already shown that he’s partial to adventurous women. It’s not so clear why Eleanor is attracted to Virgil, especially since she has reason to be suspicious of Mistral.

Mistral itself is something of a mystery. Their mission has something to do with protecting technological (and potentially magical) secrets, it seems, but it’s never made entirely clear. Their methods are equally murky. While Virgil is still trying to recruit Eleanor, they’re attacked by Mistral agents who should be on probation. Virgil and Eleanor suspect that it was an attempt to convince Eleanor to work with Virgil, but I never really followed the logic there. The agency you’re suspicious of attacks you with real weapons and forces you to kill a bunch of their agents, and somehow that’s supposed to convince you to work with one of their agents? And it’s not as if the attacking agents are presented as rogues, or a separate faction, or that Virgil himself goes rogue after this. This is probably the weakest plot point in the book and I do wish the author had spent a little more time making people’s motivations and reactions to it more plausible. But I should emphasize that it was the only plot hole that really bothered me in the book, so I don’t want to harp on it too much. Besides which, a more plausible explanation is presented later in the book. Virgil’s dead wife, Caroline, was pretty clearly a double agent, and as she’s the daughter of the Director of Mistral, that does suggest that there’s some pretty high-level corruption going on, so a little back-stabbing isn’t entirely unexpected. But apparently it seemed more likely to everyone involved that Mistral would sacrifice a few out-of-favor agents to make a point, which would seem to me a sign that it was time to find a new agency.

The pacing is well managed. There are interesting and exciting events happening in both the past and the present, with enough calmer moments to keep the pace from becoming frenetic, but not so many that the plot bogs down in introspection. While the novel starts in Paris, it is clear from the beginning that events are leading inexorably to Egypt. The Egypt of Gold and Glass has a mystic resonance, especially as we see it from Eleanor’s perspective, to whom Egypt is more home than the Ireland where she was born. The power of Egypt’s ancient history and mythology provide a strong foundation on which the author builds her own mythos of gods and magic lingering in a world of airships and mechanical horses. One in which Eleanor’s own connections to the Lady, and to the ancient Egyptian gods, are sure to play a pivotal role. Though that will have to wait, as the book ends shortly after the arrival in Egypt, setting the stage to the sequel, Silver and Steam, also available from Prime Books.

Gold and Glass is available at Amazon, Barnes and Noble, OmniLit, and Weightless for $4.99.  The sequel is also available and the author tells me that a print version will be out soon. You can check out the author’s and publisher’s websites for more information.