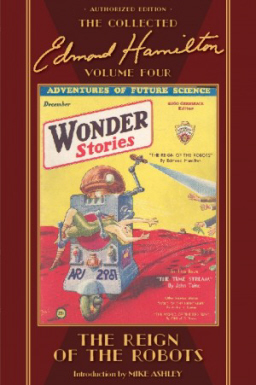 Cancel all my appointments! My copy of The Reign of the Robots, The Collected Edmond Hamilton, Volume Four arrived today.

Edmond Hamilton is my favorite pulp writer, and has been ever since I encountered his work in Isaac Asimov’s seminal anthology Before the Golden Age. I talked about my early affection for Hamilton — and my frustration at being unable to find some of his most acclaimed early space opera — in my Vintage Treasures piece on The Best of Edmond Hamilton last fall.

At the time I wrote:

When I wrote that, only three volumes of The Collected Edmond Hamilton were available, covering Hamilton’s work from his very first story “The Monster-God of Mamurth” (from Weird Tales, Aug 1926, gathered in The Metal Giants and Others), through “World Atavism” (from Amazing Stories, Aug 1930, collected in The Universe Wreckers.)

Now at last Stephen Haffner has delivered the fourth volume, gathering short fiction from the very peak of Hamilton’s career, starting with “The Man Who Saw the Future” (Amazing Stories, Oct 1930) through “The Man Who Conquered Age” (Weird Tales, Dec 1932) — and including classic tales like “The Man Who Evolved” and “The Sargasso of Space.”

Mike Ashley handles the introduction this time, with his essay “The Man Who Saved Science Fiction.” The book contains a total of 18 stories, including 10 that have never before been reprinted.

Here’s the inside flap copy:

The Reign of the Robots, The Collected Edmond Hamilton, Volume Four is certainly worth your coppers as herewith are contained no fewer than 10 unreprinted stories from Weird Tales and/or Wonder Stories. Alongside these soon-to-be-presented wonders, you’ll find some of Hamilton’s classic works such as “The Man Who Evolved” and “A Conquest of Two Worlds.”

Noted scholar and editor, Mike Ashley handles the introduction for this mighty tome. As with previous volumes in this series, an appendix showcasing the original pulp magazine illustrations also bulks large with obscura including reader’s letters from the vintage magazines commenting on these stories, along with editorial correspondence between Hamilton and his editors.

As usual with Haffner Editions, production on the volume is top notch.

The Reign of the Robots, The Collected Edmond Hamilton, Volume Four was published by Haffner Press on December 30, 2013. It is 696 pages, priced at $40 in hardcover. There is no digital edition. Learn more at the Haffner website.

My aquaintancw with Hamilton is limited to a couple of his captain Future novels and Crashing Suns, a Ace 40 cent paperback that collects some of his early space opera tales. I’d love to get the Haffner volumes – as soon as I can knock off a liquor store – because I greatly enjoyed Crashing Suns. There’s something exhilarating about reading stories that used the standard devices of the genre when they were still fresh, still new – heck, Hamilton (and Doc Smith and Jack williamson) didn’t just employ those now well-worn SF devices; they invented them. there’s still a lot of enjoyment to be gotten out of that old-time religion!

[…] Press has released the long-awaited fourth volume of The Collected Edmond Hamilton, and we have a copy to give away to one lucky […]

[…] The Reign of the Robots, The Collected Edmond Hamilton, Volume Four was published by Haffner Press on December 30, 2013. It is 696 pages, priced at $40 in hardcover. There is no digital edition. Learn more here. […]

[…] return, we offered to award a copy of the long-awaited fourth volume of The Collected Edmond Hamilton from Haffner Press to one lucky winner. The winner was randomly drawn from the list of all […]