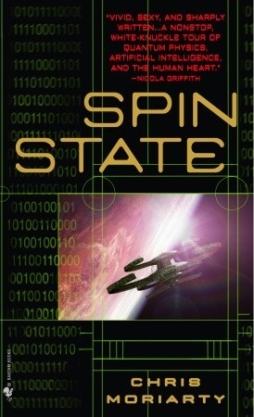 My reading’s defined, largely, by sheer chance. I stumble across something at a used-book sale, buy it along with a box of other books, put it on my shelf and forget about it, then finally years later take it down and read it and, often, realise I should have started in on it long before. Which is a long way around to explaining how I just now came to read Chris Moriarty’s debut novel Spin State, which was published in 2003. And why I’m only now writing about the best work of 21st-century science fiction I personally have read.

The first book of a trilogy (the second, Spin Control, came out in 2007; the third, Ghost Spin, was published earlier this year), Spin State was nominated for the Philip K. Dick Award and the Spectrum Award. A frenzied yet controlled mixture of hard sf, cyberpunk, space opera, political saga, hard-boiled noir, war story, and any number of other genres, Spin State captures the mind-shredding sense of wonder of science fiction as well as any book I’ve ever read. It’s densely written, intricately and dextrously plotted, and boasts dialogue both fiercely dramatic and bluntly true. It also always seems to aim at character, using its twists to generate powerful scene after powerful scene.

It ought to be a mess. It’s a long book, but covers much ground; it seems that every scene, every line, is doing three different things — touching off fuses to detonate later. But it never falls apart, never distintegrates into noise. It challenges you: I had to read the opening pages twice before I caught the rhythm of it. Set hundreds of years in the future, AIs possess wired human bodies, genetic constructs build interstellar Syndicates, and quantum technologies make distance something different than what we understand: you can physically be located on a space station in a far solar system but sit down to a full meal in an elegant restaurant on the Moon in the light of the environmentally ruined Earth. Technologies and politics are complex, and in fact the history of this future is complex all along the line: there’s a kind of take-no-prisoners ferocity to the unrelenting beat of new and wild ideas the book throws at you. Which is to say it’s in the best tradition of science fiction. 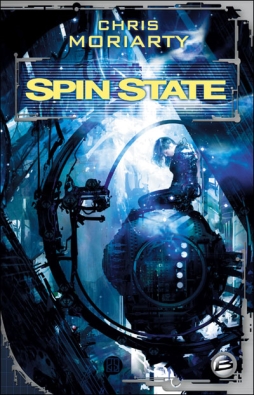 The book follows Catherine Li, a renowned soldier hundreds of years in the future. After a raid meant to recover illicit technology goes horribly wrong, she’s assigned to the investigation of the death of a brilliant scientist — and ordered to find the scientist’s missing research. The murder happened to take place in a mine on a planet called Compson’s World, both Li’s own homeworld and the sole known site of the mysterious susbstance that allows for a kind of faster-than-light travel. Aiding Li in her investigation is an AI named Cohen; manifesting through cybernetically-enhanced host bodies of either gender, Cohen had a sexual relationship with Li in the past, and now she has to determine whether she can trust him as she investigates the murder, or whether he’s manipulating her for reasons of his own.

All this, and I haven’t even touched on the way the book plays with memory (you lose parts of your memory during translight travel, so Li has to rely on backups of her memories, which might have been hacked, and might not be complete enough to guide her among people who knew her as a girl) or genetic engineering (Li’s secretly a Construct, a genetically-designed human; other Constructs have broken away from United Nations-controlled space to create collectivist Syndicates of their own, meaning that Li, raised by humans, would face terrible discrimination if her secret came out — in fact, though believed to be only descended from a Construct, she’s still held in contempt). There’s a lot going on here. Part of the triumph of the book, a triumph without which it would not work at all, has to be Moriarty’s information-dense style; fast and detailed, mixing scientific terminology and character details and subtle plot points.

To illustrate what I mean I’m going to quote a passage that isn’t obviously lyrical or elevated, but is in fact one of the rare straight infodumps in the novel. Consider the following (‘Metz’ is the name of the planet where Li’s stationed):

Metz’s Bose-Einstein relay was sulking today. A rapid-fire barrage of status messages flashed across Li’s peripheral vision telling her that the relay station was establishing entanglement, acquiring a spin-foam channel, spincasting, matching spinbits to e-bits, running a Sharifi transform, connecting nontrivial spin deviations and dispatching the replicated datastream to whatever distant segments of Cohen’s network were monitoring this briefing.

Before the first Bose-Einstein strike on Compson’s World — before the first primitive entanglement banks and relay stations, before Hannah Sharifi and Coherence Theory — a message from Metz to Earth would have taken almost three days in transit along a narrow and noisy noninteractive channel. Now Bose-Einstein arrays sent entangled data shooting through the spinfoam’s short-lived quantum mechanical wormholes quickly enough to link the whole of UN space into the vivid, evolving, emergent universe of the spinstream. 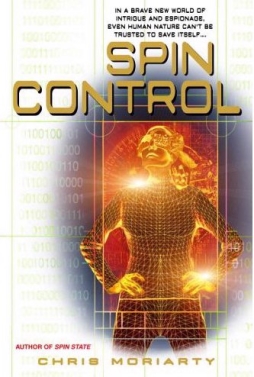 To start with, you note that some of the strange technology you’re hit with in the first paragraph is explained in the second. ‘Sharifi’ turns out to be a person, ‘Hannah Sharifi,’ who developed something called ‘Coherence Theory.’ This all (you come to realise) must have to do with quantum entanglement across interstellar distances, real-time connections between stars. The neologisms and specialised vocabulary begin to become understandable: spin-foam and spinbits, Bose-Einstein and entanglement, it moves from being a kind of tone poem to a coherent and even straightforward set of statements. Everything has meaning.

I think there’s a certain sense this sort of writing creates; a certain sense of wonder. It’s a kind of fugue state, where the new vocabulary and new ideas and new worldbuilding concepts, all coming at high speed, overwhelm the reader almost unnoticed. You read, and you feel yourself being battered by the strange. You’re near the edge of understanding, but never quite drift into meaninglessness: the speeding car of the prose takes turns on two wheels or even one but never quite leaves the road, never comes to a final crack-up. This is a feeling I think science fiction does well, perhaps better than any other kind of literature: a kind of poetry of neologisms based on concrete fact — and Spin State, one of the best examples I’ve found, has a six-page list of scientific texts for anyone looking for further reading about the book’s ideas.

More than that: this scientific imagery, like all the best imagery, relates to the theme of the book. One of the things that seems to bind the book together is a concern with information. With memory, with codes. With whether codes can be broken, or rewritten. You can see this in the structure of the book: a detective story, a mystery, and a mystery concerned with finding lost scientific discoveries. It’s all about filling the gaps of knowledge; of coming to understand. So the concern with quantum spin, with entanglement, is also a concern with information. It’s fitting we learn a bit about this sort of thing as Li muses about the equivalent of a slow internet connection; information technology deteriorating. Certainly before long the title Spin State takes on an ambiguous meaning — not just the state of the spin, but the State, the interstellar government based on the exploitation of spin. 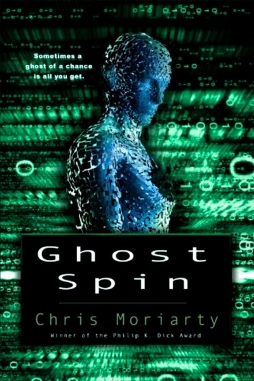 ‘Spin’ itself is a word with a political meaning to do with the manipulation of information, and it’s hard to see that as coincidence. This is a very politically aware book, with a keen sense of how power and oppression work, both on the personal level and the broader social scale. The scope of the book seems to keep expanding, so that Li’s personal struggles come to seem reflective of the issues within her society, and then those same issues come to seem to drive the plots that threaten the stability of known space. Exclusion and prejudice and systemic oppression are given a science-fictional exploration, through both character and plot, and it all ties in with the constellation of other ideas at work in the novel.

The theme is strong, then, and of a piece with structure and language. That’s the mark of a good book. Worth pointing out, though, is the fact that the novel’s also a solid technical triumph. Moriarty’s weaving of multiple plots keeps producing all kinds of powerful personal scenes for Li. An old soldier, she comes face-to-face with her former enemies in a number of unexpected ways, and also face-to-face with her own long-buried past. It never feels manipulative; it’s always natural, and always solidly dramatic. And this is important given the complexity of the book’s plot, the multiple betrayals and agendas. The direct human conflicts keep the book anchored to emotions easier to parse, relationships we grasp intuitively.

Flaws in the book are minor. Compson’s World seems undersupervised and under-resourced for a planet utterly vital to its government’s security. The advent of a major inhuman power near the end of the book seems like it ought to have a more significant effect than it does, or perhaps as though it should be placed later. And with so many twists and turns in the book, there’ll inevitably be some that you see coming; but then, you won’t necessarily guess the order in which they arrive. 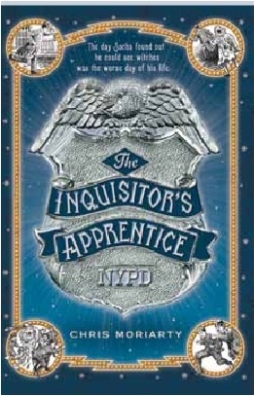 These flaws are overshadowed by the novel’s virtues. The pacing’s solid, moving through imaginative set-pieces as well as emotionally fraught conversations. The book’s action scenes in general are worth noting, well-choreographed and inventive, with fight scenes that have both dramatic weight and also genuine uncertainty. They’re credible, brutal, quick, and convey a sense of the real resourcefulness of the fighters involved without turning them into superhumans (more than cybernetics and genetic science already have).

Overall, the feel of the book to me was somewhat similar to Hannu Rajaniemi’s The Quantum Thief — the same dizzying use of cutting-edge science, the same star-spanning scope, the same use of action-story motifs in the service of something both old and new. But, besides being written several years earlier, Spin State feels more profound: it seems to have a deeper understanding of the human heart. It deals with darker things, while not itself being an especially dark book. In fact, reading the book reminded me of my first time reading Neuromancer: the same lean and tech-savvy prose, the same kind of reconceptualising of traditional science fiction — blending sf not only with new science, but with new social issues, or perhaps with new approaches to both these things. Spin State is one of the best examples I’ve come across of a book that creates the shock of the new.

Thanks, I have just ordered a copy.

I think I read reviews the way you read novels (and probably at about the same rate). Hence, while I spotted this review months ago, I’m just now reading the whole thing.

And wow — it sounds fabulous. I’ll have to track down my copy of SPIN STATE, and make the time to read it!