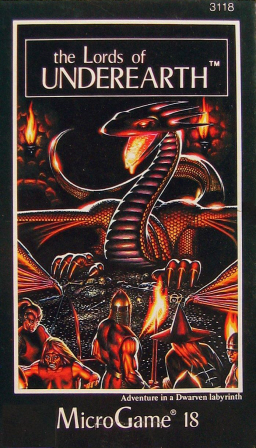 I’ve written before about the marvelously compact games from Metagaming that first introduced me to role playing, both in my editorial in Black Gate 12 and here on the blog.

It was the ubiquitous Metagaming ads on the inside cover of Analog and Isaac Asimov’s Science Fiction Magazine in the late 70s that first caught my eye. I carefully clipped out the order form (I bet you kids have never clipped an order form out of a magazine in your life. Bah! You don’t know what you’re missing. A gaping hole in the cover of your magazine, that’s what you’re missing) and mailed off my $2.95 for copy of Melee and $3.95 for the fabulously deluxe Wizard.

Both games were written by Steve Jackson — yes, the same genius designer behind Ogre, GURPS, Car Wars, Munchkin, and numerous others. For my money (all $6.90), those two early games still rank as perhaps his finest creations.

Steve Jackson left Metagaming in the 1980 to found Steve Jackson Games and his loss was keenly felt. But the rights to Melee and Wizard remained with Metagaming and its owner, Howard M. Thompson. Thompson supported the system with a series of excellent releases, including some of the best solitaire products this industry has ever seen, including Death Test, Death Test 2, Orb Quest, and Grail Quest.

I’ve been playing Grail Quest since 1980 — the last few years with my son Drew at my side — fruitlessly searching the treacherous woods and castles outside Camelot for the Holy Grail. It’s got to be in that damn game somewhere. I’m going to find it some day, I swear.

Anyway, Metagaming produced a total of 22 microgames before the company folded in 1983. Virtually all of them were science fiction and fantasy in theme, and they exhibited an imaginative range of settings and themes, from Rivets — the game of two dueling robot colonies — to Sticks & Stones, the first (and only) stone age RPG. I’ve gradually collected all of them over the years, and it was with some satisfaction that I finally completed my collection this year with the one that was the most difficult to track down: the fantasy game of subterranean warfare in an ancient Dwarven Stronghold, The Lords of Underearth.

The Lords of Underearth is MicroGame 18; it was originally released in 1981. While most titles in the Metagaming line offered very compact rules and a pretty simple map, I submit to you that Lords of Underearth broke with this tradition in significant ways. Exhibit A, the outrageous map: 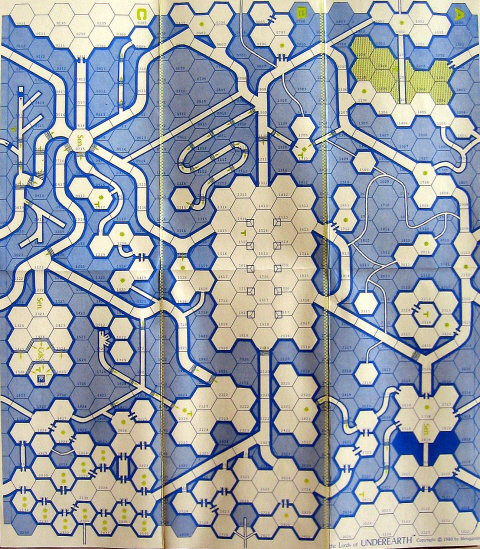 [Click on the map for a bigger version. Or any image in this article, really. Go ahead, try it.]

Seriously. That map is so complex that the game must be almost unplayable. Look — here’s the map for Rivets, just for comparison: 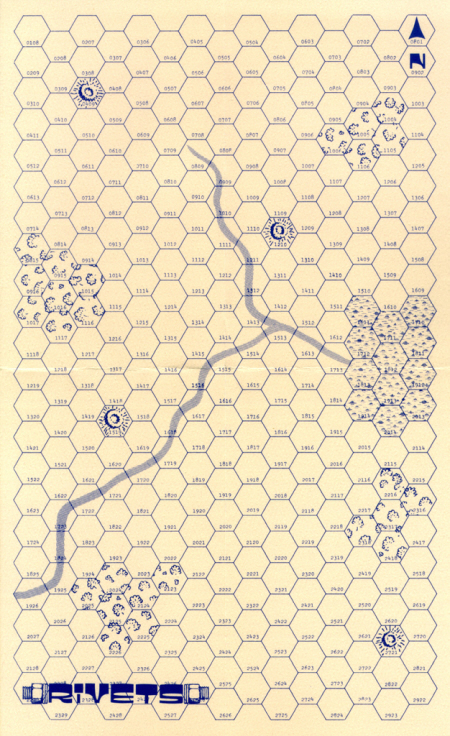 See what I mean? The Rivets map is almost ridiculously clean, streamlined for lightning fast robo-smashing action. Who needs geographic detail, if it just gets in the way of blowin’ stuff up?

But that Lords of Underearth map is crazy. Can you imagine moving your tiny little cardboard counters through all those twisty little corridors, until you finally stumble on some orcs and get to roll some dice? That’s assuming a stray breeze doesn’t completely demolish your 30-minute set-up first.

Ah, but it doesn’t matter. It’s not all about the game play. My first glimpse of that map told me everything I needed to know: this was the most ambitious fantasy wargame Metagaming had ever created. Forget the rulebook… the map is all you need to create the best Dwarven RPG scenario in the history of ever.

My second glimpse revealed a few more interesting tidbits, however.

Right you are, you sharp-eyed observer, you. The Lords of Underearth is the 1981 gaming equivalent of Lord of the Rings fan fiction. It was a thinly disguised attempt to allow gamers to recreate the fall of Moria; the crossing of the bridge of Khazad Dûm in The Fellowship of the Ring; or really any number of scenarios involving dwarves, orcs, humans, dragons, and other monsters deep in the earth.

Come on, that’s got to be worth $3.95, even if that map looks totally unplayable at first glance.

Well, now that I finally have a copy, I can find out for myself. The map is just as gorgeous and insane as it looks in the jpeg. The slender rulebook includes rules for combining Lords of Underearth with Melee, to allow Melee players to quickly resolve large-scale combats (or to resolve individual duels in Lords of Underearth, if you’re into that). There’s also a 5-page section outlining half a dozen pre-packaged scenarios, including an obvious re-creation of the flight of the Fellowship through Moria.

The Lords of Underearth is missing the simplicity and elegance of Metagaming’s finest offerings (and likely lacks the quick-action playability of those classics), but makes up for it in ambition and epic scope. This is a fully featured game that offers a range of solitaire and 2-player scenarios deep in the heart of an ancient Dwarven fortress… all in 14 pages of rules and a box that can fit in your pocket. It’s well worth a look.

The Lords of Underearth was designed by Keith Gross and published by Metagaming in 1981. The original cover price was $3.95. It has been out of print for over 30 years. I bought my copy on eBay for $10.50.

I’ve been RPGing in some fashion since the mid-seventies and I’ve long looked down on Munchkin as some silly thing. A few weeks ago, I decided to give it a try. That is a fantastically fun game! Steve Jackson really came up with an innovative, enjoyable take on an existing genre. I think back to many Ogre sessions and realize I should have been giving Jackson more respect over the years.

I know what you mean. I’ve been taken with Munchkin Quest, which I played at Capricon, and which seems to be a marvelous parody of D&D while also being a fun little game. But I skipped Munchkin, and now I’m thinking I shouldn’t have…

I’ll have to see if my kids would like to try it.

It’s a goal of mine to get the full microgame set and a complete set of Space Gamer. I’m closer on the magazine side to a full collection than on the game side, but one never knows.

Thansk for the link. I’ve always been curious about STARLEADER: ASSAULT! I didn’t realize it was intended to be a Melee-like conbat system for a complete SF RPG.

Big thanks for pointing me towards Designers and Dragons! I wasn’t aware of this book at all, and it sounds fascinating. Now if only I can find a copy! (The link you gave to DriveThru RPG no longer seems to work).

Shannon is working on a new multi-volume edition of Designers and Dragons, so they stopped printing the old one.

Shannon’s history is pretty good, but he falls into the “too much opinion regarding recent events” camp of historian. Heck, I believe that there is too much opinion in the history of the hobby period. It’s one of the reasons I collect the old magazines. Reading the Fire & Movement issue discussing the purchase of SPI by TSR changed my mind on the sale, and I’ve become more and more critical of the ire directed at Lorraine Williams over the years. Both now seem like reactionary gossip more than journalism or history.

STARLEADER was supposed to be the SF melee/wizard. There was also supposed to be a super hero version and you get a glimpse of a semiTFT supers in an old issue of TSG.

[…] Vintage Treasures: The Lords of Underearth […]

If you go to Board Game Geek, there is a page for “The Lords of Underearth” which gives some expansions for this old classic.