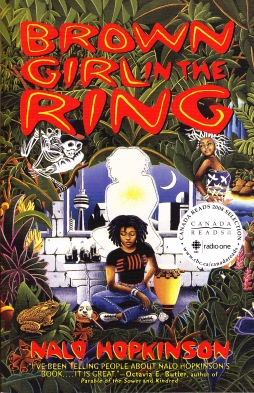 Published in 1998, Nalo Hopkinson’s debut novel was Brown Girl in the Ring, the first winner of the Warner Aspect First Novel Contest. It went on to be shortlisted for the Philip K. Dick Award and the James Tiptree Junior Award, to win the Locus Award in the First Novel category, and to help Hopkinson (who had already published several short stories) win the John W. Campbell Award for Best New Writer. She’s gone on to write five more novels, along with two collections of short stories, as well as editing and co-editing several anthologies.

Born in Jamaica, Hopkinson has lived in Toronto since 1977, and a near-future version of that city is the background to Brown Girl in the Ring. In this dystopian imagining, the core of the city’s been abandoned by all levels of government. A young mother named Ti-Jeanne lives in the community that’s sprung up; she’s the granddaughter of one of the community’s leaders, Gros-Jeanne, a healer with apparently magical powers — and Ti-Jeanne herself has begun to see strange visions. When elements of the Ontario government reach out to a local boss, asking him to supply a human heart for an emergency organ transplant, both Jeannes become involved in the resulting violence.

The novel deserves the acclaim it got. On one level, it’s a strong adventure story with a fast-moving plot. But the book’s also notable for its language — specifically the dialogue, largely written in a Caribbean English. And for the story’s use of both science fiction and fantastic elements; as it works through a powerful family tragedy, played out in a dark future through the invocation of spirits and gods, it convincingly evokes the mythic.

The best aspects of the book seem to connect up one with another. So the Caribbean dialect Hopkinson uses is good flexible prose that creates a range of tones — and nicely captures the feel of Jeanne’s visions. Here’s one paragraph:

A fireball whirl in through the window glass like if the glass ain’t even there. It settle down on the floor and turn into a old, old woman, body twist-up and dry like a chew-up piece a sugar cane. She flesh red and wet and oozing all over, like she ain’t have no skin. Blue flames running over she body, up she arms, down the two cleft hooves she have for legs, but it look like she ain’t even self feeling the fire. She ol’-lady dugs dripping blood instead of milk. She looking at me and laughing kya-kya like Mami does do when something sweet she, but I ain’t want to know what could sweet a Soucouyant so. The thing movin’ towards me now, klonk-klonk with it goat feet. It saying something, and I could see the pointy teeth in she mouth, and the drool running down them …

This is startlingly vivid and direct language, both atmospheric and precise. I couldn’t help but wish that the whole book had been written in this style, and not just because it’s so powerful in itself. The descriptive prose is North American English, which makes for a faster read, but works oddly next to passages written in the dialect above. The book’s in limited third person, meaning we follow individual point-of-view characters; and while occasional internal thoughts are given in the Caribbean dialect, description and exposition aren’t. So the characters seem to have a divided consciousness, as though there were a barrier between their perceptions and their language. 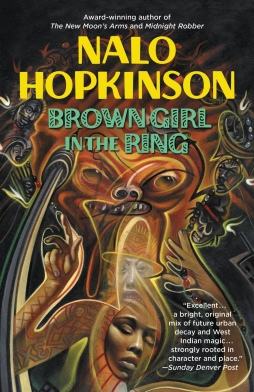 Then again, one could plausibly argue that the use of both Canadian and Caribbean English emphasise the book’s effective mingling of cultures; and certainly Hopkinson’s got a keen eye for the possibilities of a dystopic Toronto. Her sense of place is strong, and her imagining of how a community builds itself in the city core feels right. The justification for government abandoning the city feels slight, but it’s enough to serve the story. It’s enough that we have a kind of heightened reality, a very specifically science-fictional surreality, that is fundamentally in harmony with the fantasy we get as the tale moves along.

The near-future setting, the city transformed into a new state, helps us to accept the magic. The rules we knew no longer apply, is the implication. Things are not what they were. Yes, there are gods. Yes, there is magic. Why should there not be, in this new world? So the ‘novum,’ the ‘one given’ of science fiction that normally creates the story, here is just the start: an opening out of the possible. The reality we think we know is distorted; it is intensified; and, that done, the story can begin.

And the magic of the story works as magic. We get enough rules to follow what happens, but not so much that it becomes a substitute science. There’s a good balance kept between the ability of magic to affect the world and its limits that keep the story interesting and the world overall credible. Perhaps above all, the imagery, based on Caribbean beliefs, presents a wide range of effects — there are gods and monsters here, as well as visions, and spells with very precise conditions. 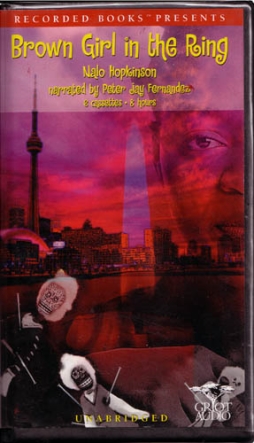 Those last really emphasise the mythical aspects of the story: you must do this in order to have this happen, and even if neither this seems to have anything to do with the other, it feels right, like a fable or fairy tale. The whole thing, after all, is driven by a monstrous need for a still-beating heart. That it’s therefore also implicitly a parable about colonisation and exploitation (the rich seeking to extract a heart from the poor in the ‘heart’ of the abandoned city) is not to be neglected, nor is the fact that it creates a strong set of shifting tensions and loyalties between the characters. But I think it’s the mythic resonance that makes the plot feel urgent and important. And it’s the way magic has conditions and rules — rules that seem both arbitrary and yet also natural — that at once integrates that magic into the overall story and gives it the sense of the numinous and awesome that make it succeed.

Brown Girl in the Ring is a solid tale. The plot’s deft and character-driven. The fusion of mythic fantasy with dystopian science fiction is successful. And the depiction of a Toronto city centre being reborn out of itself is fascinating. Another great Canadian immigrant science fiction writer spoke of the street finding its own uses for things; there is a sense in which that process is described here. But more is going on: the book goes beyond the street, into the soul and into the world of the fantastic. The novel leaves you with the impression of multiplicity — of genre, of culture, of language — handled elegantly.