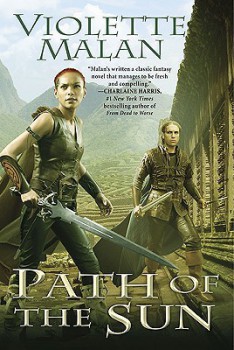 Last week I talked about how Fantasy and SF writers deal with the idea that our characters aren’t speaking English, and I focused for the most part on primary world fantasies (by which I mean fantasies with an obvious connection to our world as we live in it) and on SF works of the near and far future.

I wanted to deal with secondary world fantasies separately, partly because that’s what I primarily write myself and partly because I think that use of language might be even more important here, where language becomes most clearly part of the world-building process. Think about it: you don’t have to be half Spanish and half Polish like me to know that how we express ourselves is all about our cultural backgrounds.

So whether we call them secondary world fantasies, heroic or epic fantasy, or sword-and-sorcery, it’s how our characters express themselves – and even how the narrative voice expresses itself – that gives our readers their primary entry into the worlds of our novels and stories. Language has to make these places strange enough that readers understand they’re dealing with a complex imaginary world, while at the same time making those worlds enjoyably accessible.

Some of the same tools we use when trying to add an element of strangeness or “Other” to the primary world (playing around with syntax, avoiding contractions) can make the jump to how we express language in secondary world fantasies as well – but there are some problems that might be unique to those complex imaginary worlds.  And therefore some tools that might be unique as well.

One of the best (and therefore most common) tools we’ll find in secondary world fantasy is “trade talk”, AKA “the common tongue” – useful because today’s readers (and audiences) are way too sophisticated to think everyone in a whole world speaks the same language. I use it in my own Dhulyn and Parno Novels, for example, since my mercenary characters do a fair amount of travelling around, and I can’t have Dhulyn constantly translating for Parno – even if it was believable that she spoke every single language they might encounter.

Mention is occasionally made that someone’s trade talk is “accented”, and that pretty much takes care of the more-than-one country issue. Those of you paying attention will notice that this is a variation on the “universal translating spell ploy” I mentioned last week.

In terms of world building, having a “common tongue” means we’re postulating that historically something happened in this world to allow such a thing to arise – something like the Roman Empire, or a very powerful trading group, just to give you a couple of examples. See? You’ve just created a whole historical foundation, just to allow your characters to speak easily to one another.

Okay, so once we’ve done that, how do we convey the idea that none of them are speaking English? How to give them the flavour and semblance of a culture not our own?

Again, one of the best (and therefore most common) tools to convey this idea is naming. Yup, the old person/place/thing idea. Have a look at any foreign language dictionary. You’ll very quickly be able to sort out some specific characteristics in terms of spelling, common letter pairs, use of marks like umlauts and tildes. (And you can tell those two words come from different languages, can’t you?) 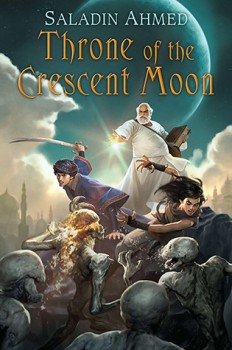 Once you’ve isolated some defining characteristics, use them to shape your own proper nouns. It can be anything from the subtlety of no Spanish words beginning with “s”, or something more hammer-like, such as the frequency of the “cz” combination in Polish. I don’t mean you should create cultures that are recognizably Spanish, Polish, German or whatever. I mean that you should make the proper nouns of your culture sound as though they all have a common basis, and the method I’m suggesting is one way of doing that.

These languages are all western European, which for North American writers has long formed the basis of Fantasy’s “invented” cultures. But times are changing. We’re getting some great examples of other cultures being used, even in secondary world Fantasy.

Take the opening of Saladin Ahmed’s Nebula-nominated Throne of the Crescent Moon:

Doctor Adoulla Makhslood, the last real ghul hunter in the great city of Dhamsawaar, sighed as he read the lines.

With this one sentence (and, aside from the lines of poetry referred to in it, it’s the first sentence) Ahmed immediately lets his readers know what kind of culture they’re in for – and by using unconventional spellings, that it’s probably an invented culture.

I think you’re getting the idea, but there is one last thing. Try not to take over foreign words wholesale. After all, we do know what happened with the South American ad campaign for the Chevy Nova, don’t we?

It almost makes me wish there was a “subtitle” option for dialogue in books — it’s interesting to watch a subtitled film where they’re speaking two or more languages and to be able to “hear” the difference.

Since everything in a book necessarily has to be written in English so I can read it in the first place, the tools at your disposal are much more limited — as you said above, using names (now there’s a topic for a whole new essay) and altered grammar. Or maybe sprinkling in the occasional untranslated word or phrase. Beyond that, you’re kind of stuck just describing things directly — “he asked in his barbarously-accented broken Common”, for example.

The only serious problem I have with subtitles is that I tend to focus on them, and miss facial cues. That said, I still prefer to watch sub-titled rather than dubbed films. Unless it’s Spanish, in which case I prefer to watch them dubbed.
As for the occasional untranslated word or phrase, I usually do that for things like “coffee”, that is, something we use all the time, but that for climate or cultural reasons can’t exist in the created world.
‘Course, that brings us to a whole discussion of food, doesn’t it? Hmmm.

It is for such comments that the proofreading mark stet was invented. : )