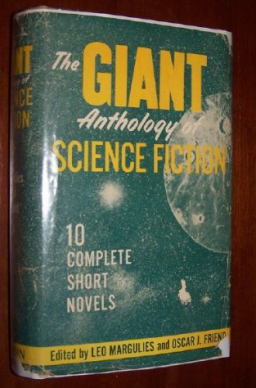 Those four boxes of books I purchased from the Martin H. Greenberg collection have been the gift that keeps on giving. In the third box I found about 30 hardcover anthologies, dating from the 40s to the 70s, including The Giant Anthology of Science Fiction: 10 Complete Short Novels, edited by Leo Margulies and Oscar J. Friend.

This book is a treasure trove of vintage novellas from the Golden Age of SF and fantasy. Despite the “Science Fiction” in the title, a great many of the delights on offer are fantasy, as the term was used pretty much interchangeably with science fiction at the time. Just check out this table of contents, with original dates of publication:

This is a really fabulous collection, starting with Leigh Brackett’s “Enchantress of Venus,” an Eric John Stark novella originally published in Planet Stories, in which adventurer par excellence Stark commands an expedition into the mysterious Red Sea of Venus, where he leads a slave revolt against an ancient Venusian family. The editors call it “today’s parallel of H. Rider Haggard’s best fantasies.”

The book is crammed with pulp classics, virtually all of it work that isn’t much reprinted. Novellas, as the editors note in their introduction, rarely get much love from anthologists, who tend to prefer short stories. In introducing the other tales they say:

Jack Williamson’s “The Sun Maker” [is] a splendid yarn of spatial magnitude. And Manly Wade Wellman’s “Island in the Sky” [is] a vigorous tale of the future which brings back the reminiscent glory that once was Rome… For sheer cosmic sweep of imagination and fantasy Henry Kuttner’s “Sword of Tomorrow,” Fredric Brown’s “Gateway to Darkness,” and Edmond Hamilton’s “Forgotten World” cannot be surpassed.

Leo Margulies, editorial chief of Standard Magazines, was one of the most prolific editors of the pulp era. At his peak in the 1930s it was said he edited no less than 46 magazines, including Startling Stories and Thrilling Wonder Stories. Oscar J. Friend was a writer for Wonder Stories, Startling Stories, Thrilling Wonder, and a handful of other pulps, and with Margulies he also co-edited From Off This World (1949), My Best Science Fiction Story (1949), and Race to the Stars (1958).

The Giant Anthology of Science Fiction was published by Merlin Press in 1954; it is 580 pages. It never had a paperback edition. I paid two bucks for a coverless edition; Amazon has copies starting at $12.98.

Thanks for your post, which was bittersweet, reminding me of the many, many wonderful books my dad handed down to me which were ultimately lost along the way. Oddly enough, though I was a Heinlein fanatic when I was a teenager, and read almost all of his books more than once, the one short story of his that has remained with me, the one I’ve told my own son about, was “By His Bootstraps.”

Thanks for the comment, Mudslinger. Oddly enough, I’ve never read “By His Bootstraps.” “Universe” (the first half of ORPHANS OF THE SKY) is my long-time favorite Heinlein tale.

I’ve put this collection by my bedside, and expect to thoroughly enjoy it over the next few weeks.

[…] already covered From Off This World (1949) and The Giant Anthology of Science Fiction (1954), both edited by Leo Margulies and Oscar J. Friend. This week, I’ve been fondling […]