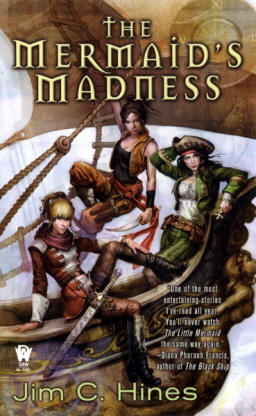 The major characters are established in the first book of the series, The Stepsister Scheme, which is basically a darker retelling of the story of Cinderella (her real name in the novel is Danielle). There the three princesses team up to rescue Armand from Cinderella’s stepsisters.

The Mermaid’s Madness, the second book in the series, is a retelling of “The Little Mermaid,” but of course with the requisite dark twists and turns. I won’t go into many details of the storyline, to avoid spoilers. The mermaid Lirea is totally insane (thus the title) and trying to start a war. After murdering her father, her next move is to steal Queen Beatrice’s soul. The plot twists are well paced throughout the book, offering a consistent mutation of the original tale. Most impressively, all of the character motivations – even those of the insane characters – make sense from their point of view.

While the plot is enjoyable, the real charm of the book is the dynamic between the main characters.

In fact, I guess it’s confession time – I have never actually read the first book. Despite that, I had no problem immediately getting up to speed with the setting, the characters, or their internal relationships. By building on the framework of existing fairy tales, Hines has a natural structure upon which to add his permutations.

And the permutations are dark, in ways that bring modern sensibilities to bear on these classic tales. Each of these princesses has been abused – abused by parents (or step-parents), sisters, lovers – and the wounds are apparent in this version of the story. This abuse forms the basis of the empathy and friendship between them.

While the tale is pretty dark, Hines does a great job of keeping it from overtaking the rest of the narrative. The story is also filled with genuine humor, wit, and levity. It is a tough job to mine this familiar material without seeming clichéd – or like you are ripping off Shrek – but these problems were avoided in this story. All of the components of the novel worked well together … well enough that it makes me look forward to reading Red Hood’s Revenge (2010) and The Snow Queen’s Shadow (2011), to see how Hines transforms some other classic tales.

This review comes from the pages of Black Gate #15. The book was provided by the publisher for review purposes. It has been updated to take into account publication of books since it was written.