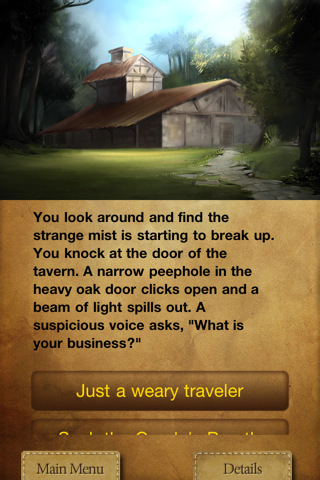 We’re big fans of Dark City Games’ terrific line of solitaire fantasy games. We’ve wasted many hours with these little wonders on the Black Gate rooftop headquarters, when we should have been plotting the overthrow of the entire publishing world.

Instead, we searched for the buried archives of long-dead sorcerers on The Island of Lost Spells, stood alongside Roman Legionnaires at the border between Gaul and Germania in Wolves on the Rhine, and plumbed the depths of an ancient ruin for a powerful relic in The Oracle’s Breath. There are publishing barons in Manhattan who owe their Perrier to Dark City Games, and that’s a fact.

Subscribers may even remember that we published a complete solo adventure from Dark City Games in issue 12 of Black Gate: “Orcs of the High Mountains,” by Jerry Meyer, Jr. Don’t tell me we don’t share the love.

Now comes word that Questland Games has made one of Dark City’s best adventures available for the iPhone: Oracle’s Breath.

Yes, now you can journey to a rich world of fantasy while everyone else in the staff meeting thinks you’re checking stock prices.

That’s a screenshot at right.  Here’s the description:

The cold fog blankets the village’s wood piers, as you glide silently in on your skiff. For a moment, you say a silent prayer to the sea god to have guided you this far. But your gratitude wanes when the silence betrays neither sound, nor voice, nor movement from the concealed village. Now, as daylight wanes, and shadows shift in the midst ahead, you look to your companions, gather your wits and draw your weapons, in search of “The Oracle’s Breath.”

Oracle’s Breath is an adventure through a series of islands to find the mythical artifact of legend.  At every step in the story, you will be presented with several choices.  The choices you make influence the next part of the story your see, and ultimately the success of your quest.  Oracle’s Breath also has strong RPG elements, and a fantastic original combat system.

Oracle’s Breath looks like the closest thing yet to a traditional pen-and-paper RPG on an iPhone. It uses the Legends of the Ancient World system (the same one used by The Island of Lost Spells, Wolves on the Rhine, and the rest of Dark City’s fantasy line), meaning your character has access to combat skills, talents such as lockpicking, and an impressive array of magic spells.

The publishers have made a free version available, which allows you to play through a lengthy portion of the game.  The complete quest is just $1.99. You can see more screenshots at GameSpot, and read more about the iPhone version at touchArcade. See the original pen-and-paper version at the Dark City website, and read Todd McAulty and Andrew Zimmerman Jones’ reviews of The Island of Lost Spells and Wolves on the Rhine here.

Just want to see what all the fuss is about first? Play a complete science-fiction mini-game from Dark City Games right here on the BG website.

Text adventures are great! But don’t all the detailed graphics in today’s adventures ruin the fun of using your imagination?

That’s a great question. ORACLE’S BREATH has fairly limited graphics from what I’ve seen so far – just enough to pique your interest, but not so much that it dominates your imagination.

Try it and let us know what you think!