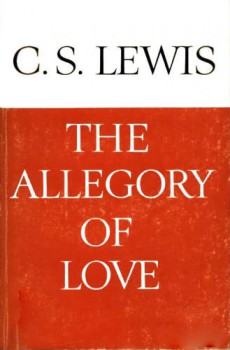 The old gods, when they ceased to be taken as gods, might so easily have been suppressed as devils: that, we know, is what happened to our incalculable loss in the history of Anglo-Saxon poetry. Only their allegorical use, prepared by slow developments within paganism itself, saved them, as in a temporary tomb, for the day when they could wake again in the beauty of acknowledged myth and thus provide modern Europe with its “third world” of romantic imagining.

–C.S. Lewis, The Allegory of Love

Tracing the roots of fantasy is a fascinating exercise. From whence did works of pure fancy spring? How far back do we go to find their source? Are its origins to be found in works like The Epic of Gilgamesh, or The Iliad and The Odyssey (for a great series of posts on the subject, look no further than Matthew David Surridge’s four part series Worlds Within Worlds ).

In his landmark study The Allegory of Love (1936), C.S. Lewis implies that fantasy’s roots lie not in the classical period, but the Medieval Age. Medieval poets infused “extinct” pagan gods with new life by employing them as allegory. Venus and Mars, Minerva and Jupiter, died and awoke again as concepts, sewing seeds that would eventually give rise to works like Phantastes or The Well at the World’s End.

Go back to the beginnings of any literature and you will not find works of myth and fancy, Lewis claims. Ancient writers wrote stories based on the probable, or events that they believed actually happened. Or they took the marvellous as fact, writing without irony about hippogriffs and sea-monsters. Purely fantastic fiction was unknown (classical poets employed allegory, but not in this manner). Pagan gods as allegory, and the acknowledgement of myth by medieval poets, marked a cosmic shift in artistic technique, paving the paths for writers like Spenser and Shakespeare and Milton and transitioning us to works of pure fantasy. “It is difficult for the modern man of letters to value this quiet revolution as it deserves,” writes Lewis. “Allegory may seem, at first, to have killed them; but it killed only as the sower kills, for gods, like other creatures, must die to live.”

Revelations and gorgeously turned bits of wisdom like these are only a few of the treasures to be found in The Allegory of Love.

The heart of the book is an examination of a phenomenon known as courtly love. Love was absent from the literature of the Dark Ages and the Classical period, Lewis writes. Poets in the pre-medieval age wrote not of men marrying women, but of how holy men went to heaven, or how brave men went to battle. That art reflected a distasteful reality. In feudal society marriages were not born out of love, but were matches of interest. As a result, adultery—an expression of genuine passion, albeit of an illicit nature—became idealized. 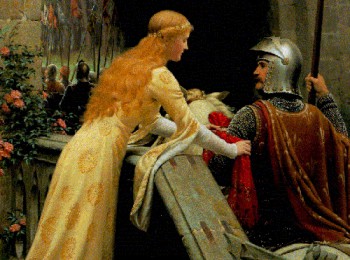 This phenomenon was known as courtly love, and soon became a favored subject for French poets like Chretien De Troyes. The recovery/rediscovery of Aristotle’s texts in the second half the twelfth century continued to turn medieval writers’ gazes inward. “His [Aristotle’s] effect … was to dig new chasms between God and the world, between human knowledge and reality, between faith and reason,” Lewis writes. Allegory evolved as a literary technique to examine these contending forces, allowing poets to entreat with human emotions like Envy and Shame and Fear through personification.

Equipped with this new tool, medieval poets like Chaucer and Guillaume de Lorris could examine the troubling moral questions inherent in adulterous, courtly love. Powerful art like the Roman de la Rose was borne of that struggle. Eventually courtly love began to deteriorate under this close examination.

The Allegory of Love also sheds light not only the art but the mindset of the medieval age. For example, the concept (alien to many modern readers) that not all men are equal:

“The modern reader is apt to start from an egalitarian conception; to assume, in fact, that the fair way of dividing a cake between two people is to cut it into two equal pieces. But to this Aristotle, and the most reputable political thinkers between Aristotle’s time and Spenser’s, would have replied at once ‘It all depends who the two people are. If A is twice as good a man as B, then obviously justice means giving A twice as much cake as B. For justice is not equality simpliciter but proportional equality.’”

Despite his obvious love for the material Lewis is no fawning sycophant, and he takes several of his subjects to task (often in amusing fashion) for their digressions and other artistic flaws. Likewise he showers with praise the best poetry of the age, for example the Italian epics:

“Johnson once described the ideal happiness which he would choose if he were regardless of futurity. My own choice, with the same reservation, would be to read the Italian epic—to be always convalescent from some small illness and always seated in a window that overlooked the sea, there to read these poems eight hours of each happy day.”

In other words, you get to see a side of Lewis the man even as you learn about medieval poetry. Bonus!

A word of caution: The Allegory of Love is in places a rather difficult read. Lewis assumes a high degree of erudition of his readers. He expects you to know at least a modicum of Latin and even Greek. He inserts passages in both languages into the book without providing translation, often to punctuate a point. Lewis also does not provide neat summaries of these medieval poems, but expects his readers to be familiar with their general contents. Some of this material was over my head, but the struggle was worth it. In addition, some of his arguments are based largely on conjecture, such as his claim that the gods were not employed as allegory by the poets of the classical period (I’m no medieval or classical scholar so I’ll leave that argument to others, though I’m not sure that Homer was so literal). Regardless, if you’re interested in medieval writing and/or ruminating on the earliest origins of fantasy, The Allegory of Love is an indispensable tool.

This sounds delicious! I’ll definitely have to add this to my TBR pile.

I’m not so sure about that claim that pre-medieval poets wrote about moral and martial matters to the exclusion of love. Ovid’s Metamorphoses has a great deal to say about love–romantic, domestic, carnal, whatever. Maybe Ovid was an outlier? I’m certain C.S. Lewis knew his way around classical literature better than I do–I’m a dilettante by the standards of his day–but that claim just sounds wrong.

Maybe James Enge will weigh in on this one.

Hi Sarah, it’s definitely well worth reading, and this coming from a guy who can’t read Latin or Greek.

Lewis does spend quite a bit of time on Ovid. He states that Ovid was “the most characteristic of the ancient writers on love, and certainly the most influential in the Middle Ages.”

However, he concludes that Ovid composed his Art of Love “as an ironically didactic poem on the art of seduction,” and that it was written for an audience that treated love as “one of the minor peccadilloes of life.” Although the Art of Love was written in a serious tone, Lewis claims Ovid intended it as an elaborate joke.

Mr. Lewis wrote in an era when an educated person had at least a basic familiarity with Latin and/or Greek.

One of his other great works, The Discarded Image, should be required reading for anyone presuming to write medieval historical fiction or even derivative fantasy. The book also brings a happy reminder that the insanity of the last 100 years isn’t necessarily the human condition.

I’ll definitely have to seek out The Discarded Image, thanks Tyr.

It’s important to recall that in Allegory of Love and elsewhere C.S. Lewis views courtly love as a glorification of adultery which corrupted both marriage and society, and for drew people from the love of God into the love of self.

Thanks for this fine posting!

Let me recommend a third CSL book (since someone beat me to it as far as recommending The Discarded Image): An Experiment in Criticism.

This is a landmark blow against the view then common among critics and academics, that fantasy is harmless escapism at best, more likely a harmful indulgence in psychological shirking. I think critical orthodoxy has changed in 50-odd years. When Lewis’s book was published, it had to take some courage (or let’s say zest for scoring touche’s!) to write it — and I salute Cambridge University Press for publishing it. There’s more here than advocacy of fantasy and myth at their best, but it’s cool to see him argue for the value of (say) Rider Haggard!