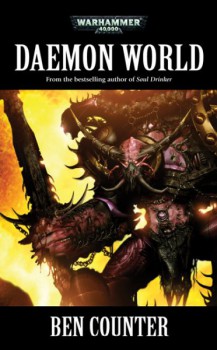 The world of Warhammer 40,000 takes ‘dark’ to a whole new level, with a constellation of warring races in various shades of gray (for example, the ‘good guys’ of the Imperium have no qualms about eradicating entire planets within their own empire), a bleak, medieval gothic aesthetic oozing with fanaticism, intolerance, and cruelty, and an essentially hopeless outlook for humankind.

Indeed, the series tagline, “In the grim darkness of the future there is only war,” gets at the heart of the 40k setting, though it misses somewhat the undercurrent of black humor and parody that have been present in this universe since its inception. But the enormously popular world of the 41st millennium is more than just a space opera version of Warhammer Fantasy – despite its space elves and orks, Warhammer 40,000 is a unique and appealing setting that has been steadily accruing a history and a body of lore for over twenty years, all of which makes it much more complex and interesting than it may appear at first blush. It is a richly detailed, dark fantasy of the future that synthesizes everything from Paradise Lost to Star Wars, H.R. Geiger to H.P. Lovecraft, Dune to Starship Troopers.

And the darkest facet of this unremittingly gloomy universe is the forces of the Chaos powers; here quite morphed away from their Moorcockian antecedents. Ben Counter’s Daemon World takes the Chaos ball and runs with it – instead of telling a story where Space Marines or Imperial Inquisitors battle the minions of Chaos, he gives us instead a tale that comes from the very heart of Chaos itself, the cosmic storm known as the Maelstrom, and the planet Torvendis which has been completely overrun and corrupted by the taint of Chaos energy. On Torvendis, nothing is permanent, entire landscapes change in accordance with the whims of dark forces, and the human inhabitants live bizarre, brutal lives.

Torvendis is currently dominated by the city of Lady Charybdia, a champion dedicated to the Pleasure God Slaanesh. Her city is a riot of weirdness – with breathing buildings, horrible temples, and all manner of mutants and daemons.

But on Torvendis, no regime lasts forever, and Daemon World is the story of an alliance of tribes on the periphery of Lady Charybdia’s empire that unite to overthrow her rule. Lead by the warrior Golgoth, a man trained briefly in sorcery by the mysterious Kron, the tribal armies assault the city-state of Lady Charybdia in alliance with an ancient evil – an enormous Daemon Prince of Slaanesh’s chief rival, the murder-god Khorne. 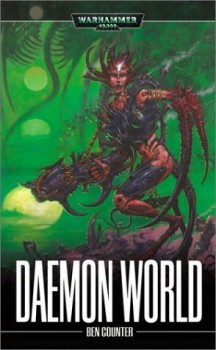 Thrown into this mix are the corrupted Space Marines of the Word Bearers Chapter – men who had once followed the Emperor of Mankind but succumbed to the lure of Chaos 10,000 years ago. The Word Bearers – fanatics who worship Chaos as an undivided entity, and look on the exclusive worship of one Chaos god as a perversion – are seeking a renegade of their order whose ship was tracked to Torvendis. It is soon apparent that Kron, the sorcerer and puppet master behind the tribal assault on Lady Charybdia’s city, may in fact be the renegade the Traitor Marines seek.

At the heart of Daemon World is Chaos, and Counter does not miss the opportunity to celebrate it in all of its forms. His imaginative – and often gruesome – descriptions of the setting and people of this world truly evoke the feeling of a planet gone mad, and the novel abounds with off-handed references to strange events and times long past that bring the world to eerie life. The mindset of those tainted by Chaos is also examined, and Counter is careful to show that the forces of Chaos are far from monolithic in their outlook – from the disciplined worship of the Word Bearers or the instinctual and emotional frenzy of the tribes and commoners of the empire, to the hedonistic existentialism of a rival Marine Chapter and the refined aestheticism of Lady Charybdia herself.

Daemon World is an example of what Warhammer 40,000 excels at: brutal action and the evocation of the horrific and bizarre. For much of the time plot is firmly in the driver’s seat, and character motivations are often foggy or too convenient to satisfy – particularly in the case of Golgoth, whose emotional state turns out to actually be crucial to the story, although there never seems to have any real narrative weight behind what he is feeling. But Warhammer books must ultimately be judged on whether they keep the reader turning the page, and Daemon World succeeds at just that. While I would not recommend it as someone’s first foray into the ‘grim darkness of the future,’ fans of the setting will appreciate Counter’s exuberant nastiness, fantastic imagination, and attention to the details of 40k lore.