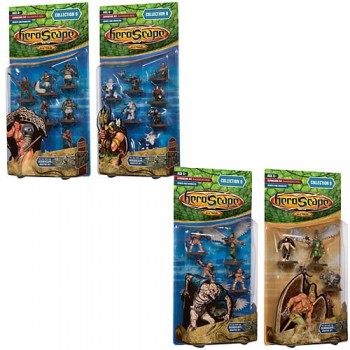 In 2004, I made my first trip to GenCon and was overwhelmed by the experience. I don’t remember much about the specific tables I visited, but I do remember coming across this new game, HeroScape, which applied a modular style to tactical war gaming – not just in the building of the army (which was usually modular in some sense), but in the design of the playing surface and terrain.

Just as Howard describes himself below, I was also the sort of person who always chose storytelling games over wargames. I had bought some Warhammer units, but had spent so much time painting them that I’d never actually gotten around to playing the game … and even if I had, the lack of terrain would have annoyed me.

With HeroScape, all of these elements came packaged together in a master set, and you could expand on the experience easily enough with various expansion packs. Six years later, Howard describes his experience with the current incarnation of the game.

Wizards of the Coast ($51.96)
Reviewed by Howard Andrew Jones

I’ve always enjoyed tactical games, but when given the choice between a storytelling game and a wargame, as a youth I always picked the former, unless you count all those hours I spent playing Risk. I wasn’t sure quite what to make of the big war game simulations I’ve seen at various game stores or at conventions, where you can walk past a whole slew of tables where men young and old stand silently while arranging tiny figurines and consulting charts.

Some ten years ago I had a group of friends that spent a lot of their time painting Warhammer armies – small, detailed metal figures that required magnifying glasses and brushes with ultra-fine bristles to properly prepare. I’m compulsive in my own special ways, but any activity requiring artistic skill and long hours didn’t seem like my idea of a good time.

But Heroscape – that seems more like my speed. A review copy of the game arrived, and I sat down with my good friend Bruce and two handy young volunteers, ages 9 and 12, to take the game for a spin.

A Heroscape master set comes with an immense number of hexagonal tiles that can be stacked or connected in an array of patterns that might as well be endless. Some platforms are large, some small, and they come in different colors indicative of rock, soil, water and – in some of the expansion sets – frost and lava. The rule book looks deceptively complex, but the rules, both basic and advanced, are actually quite well explained and arranged, and part of the reason behind the instruction booklet’s size is that all rules are well illustrated with examples. The figurines enclosed with the basic set may not be as finely detailed as those hand painted by my artistically gifted friends, but they look pretty good on the battle map.

Each hero or squad comes with its own card, and a lot of the fun of the game is the variety to be found by selecting your army and your hero and seeing how they stack up against your opponent’s choice in a variety of terrains. Expansion packs of terrains or heroes, each with their own, slightly different advantages, just add to the fun.

Heroscape’s been going strong now since 2004, and there have been 10 waves of expansion sets. Wave 9 was released this summer, and was titled Blackmoon’s Siege. The four packs can be purchased separately or together, although when purchased together most vendors seem to discount the overall price. Some packs are linked – for instance, Brave Arrow of the Mohicans is packaged in collection 1, but the Mohicans themselves are packaged in collection 2. The dwarven hero enclosed in collection 1 is backed up by the dwarves in collection 3. Part of the charm of Heroscape is that players can choose armies from a wide variety of cultures, both real and fantastic, from many eras of history. This expansion pack has a selection of Indian braves, dwarves, robots, a ninja hero, and some Heroscape specific creations, winged warrior Kyries, and some nasty looking zombielike things made of flesh-colored taffee called Marro Dividers.

It’s a good mix. When my son picked his armies, he cabbaged on to Atlaga, the Kyrie Warrior who, being a winged hero character, can move 5 spaces without having to take hex height into account (each time a figure moves up a hex level, it counts as a movement point) and can, on a lucky die roll, destroy any enemy in a single blast. Bruce chose Brave Arrow, though I myself ended up with his Mohican River Tribe squad.

One of Brave Arrow’s special abilities is that he has a chance to avoid ranged attacks through his use of concealment. The Mohican squad may have only one life point each compared to Brave Arrow’s four, but its members also have a chance (albeit smaller) to conceal themselves from ranged attacks, and receive two bonus die rolls in hand to hand combat. The hero characters, in addition to being more durable and having a few more gimmicks, all have the ability to boost their follower’s die rolls if those followers are within certain number of hexes. As with all heroes and squads, the rules cards are two sided; younger players may want to  work with the simplified rules, although both of my playtesters seemed perfectly capable of following – and enjoying – the more advanced options.

Two thumbs way up for both the game and the expansion. Sometimes the products I buy are really neat and I read and enjoy them… then put them on the shelf. This is one that my whole family can enjoy for many years to come. If you used to love the idea of the original Risk but grew frustrated at the way blind dumb luck could overrule actual tactical planning, you’re likely to enjoy this game. A lot.

These reviews appeared in Black Gate 14.