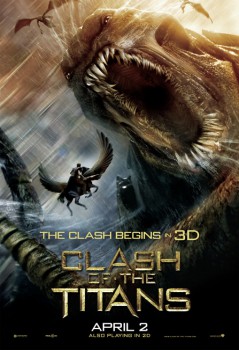 You may not believe this, based on other things I’ve written at this site, but I walked into my local movie theater showing the re-make of Clash of the Titans with an open mind. Or as open as possible for someone who can pinpoint the original 1981 film as the moment from his childhood when he awakened to fantasy adventure.

And I’m glad I kept my mind pried open. Because Clash of the Titans: 2010 is a perfectly adequate modern fantasy movie, and I was able to enjoy the good that it had to give.

This may not sound like a stirring recommendation, but when you consider the complete Olympian thrashing the film is getting from the majority of critics, for a Ray Harryhausen defender to say, “Hey, I kind of liked that,” is, ahem, a titanic deal. (I’m really, really sorry about that pun.)

Most of the negative notices launched at Re-Clash of the Titans have to do with its post-process 3D. Apparently, distributor Warner Bros. decided to screen the film for critics in 3D—and they will regret it. I have heard from every source—every single one, critics, bloggers, personal friends—that the hastily done 3D conversion on this film is jaw-droppingly awful. I made up my mind months ago that I would see the film in 2D, which is not only more economical, but the way the filmmakers originally intended for me to see it. When I started to hear horror tales about 3D screenings where viewers were simply taking off the polarized glasses because they preferred watching a blurry double image rather than endure a terrible effect slapped on the movie as a box-office afterthought, I knew I could stay steadfast with my 2D resolve.

And Clash of the Titans Too looks great in 2D. It’s a beautifully photographed, designed, and costumed movie. It has much more practical location work and effects than the trailers might make you believe; it’s not the 1981 film fed through the 300 digi-grinder. In look and feel it’s far closer to The Lord of the Rings, and since Peter Jackson is such a huge Ray Harryhausen fan, that’s not a poor choice. The movie has an exotic flavor and a sense of a mythological world that, while not as accurate to genuine Greek myth as the original, doesn’t feel like studio executives throwing junk at a white wall and hoping some of it sticks. 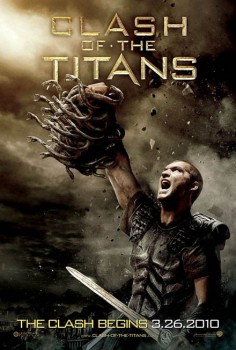 Since the visuals are what make Clash Harder enjoyable, I understand why boring and misguided 3D could cripple it: away from monsters and majestic mountains, the movie has a crop of problems, starting with its script.

In terms of story, Clash of the Titans: Electric Boogaloo is a mess. This might be the new filmmakers trying a deliberate homage to the Ray Harryhausen and Charles H. Schneer films, which were never known for clever screenplays (although I’ve made a case for The Golden Voyage of Sinbad). But the Harryhausen-Schneer movies have the trouble of overly linear plots based around the stop-motion sequences. Clash of the Titans Redux has the opposite trouble: it layers together too many sources—the first movie, other strains of Greek mythology, new ideas and characters—and ends up without a firm backbone. Quest for Medusa’s head/kill Kraken/save the girl. Now add this: Perseus wants revenge for his dead family/mortals have gone to war against the gods/Hades is plotting against Zeus/Calibos is Perseus’s stepfather. The movie doesn’t need all the extra baggage, and it especially harms the character of Perseus, who seems lost in a motivational ocean while stuff just happens around him.

It doesn’t help that Sam Worthington is a blank in the part and makes Perseus a dull hero. Most of the performances in Clash of the Titans, Volume 2 are energetic and tuned to the material, but Worthington seems to have wandered in from, well, Avatar and not changed a thing. He simply looks lost here, while other actors like Mad Mikkelson (taking the Tim Piggot-Smith part) and Ralph Fiennes (as Hades) chew the scenery with Bronze Age vigor to keep viewers interested. And it’s been said before and will be said many times after, but here it goes anyway: Sam, that’s a bad haircut. Did you accidentally wander through the opening sequence of Full Metal Jacket before reporting to the set?

I was surprised that the “Mortals in Revolt against the Gods” didn’t irritate me that much. The idea is antithetical to Greek myth and was a point of concern for me in all the promotional build-up. However, the concept makes sense on screen. When you have a pantheon of gods who spend most of their time committing adultery, starting wars, and punishing people who accidentally see them naked, I imagine you would eventually get sick of them as well and want to knock these jerks off their arrogant perches. (Of course, this is one of the reason we love the Greek Gods; they’re so human. However, I don’t believe any of us would actually want them ruling us. Okay, maybe Athena—she even plays fair with people she curses.) The idea of empowering humanity is a stirring one to me personally, but unfortunately the film doesn’t handle the possibilities of a rebellion against Olympus very well. The revolt is already in full vigor on when the story starts, and then the movie fails to carry through with it, switching over to making Hades the villain to let the other gods off the hot seat. “Evil Hades” is another concept foreign to Greek mythology, a mistake the Disney Hercules also made. Ralph Fiennes gives a fun performance as the god of the underworld and his confrontations with his brother, Buffed ‘n’ Polished Zeus (Liam Neeson), compensate somewhat for the error.

A huge change made to the original story is the invention of a female lead named Io (Gemma Arterton) and the subsequent removal of Andromeda (Alexa Davalos) as Perseus’s romantic interest. Andromeda is still scheduled for sacrifice to the Kraken to save her city (changed from Joppa to Argos), but Perseus cares not a whit about the princess and only wants revenge on the gods for the death of his family. Io, a woman cursed with immortality who has followed Perseus all his life, becomes his mentor and advisor on the quest. Perhaps this is meant to replicate the character of the playwright Ammon from the original movie, but you would never mistake Gemma Arterton for Burgess Meredith. (She’s hotter than Burgess, but doesn’t have his charm.) Io functions well enough as a foil to Perseus that it feels as if the script could have cut out Andromeda entirely. With the plot changes, Calibos (Jason Flemyng) has also become superfluous and now exists only as an excuse to get the scorpions into the story. There’s also a djinni who is made from wood, and the movie keeps him around to no purpose long after he fills his minor function. 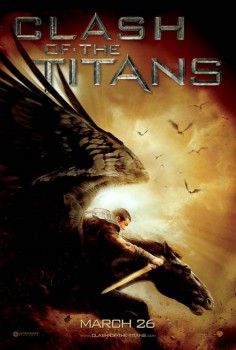 But I did enjoy the film, right? Why? Because of Big Freakin’ Scorpions and Giant City-Smashing Kraken and Medusa and Harpies and People Killing Things with Sharp Objects and Stuff. That’s why. Filmmakers don’t need to use the hard sell to get me to buy material of this kind, and Clashes of the Titanses has some good folks on its sales force. This isn’t Ray Harryhausen magic—how could it be?—but it’s livelier than so much else that passes for fantasy effects in modern cinema. The VFX team and director Louis Leterrier let us really look at the beasts and enjoy them, and they get the proper use out of them. The one exception is Pegasus, who doesn’t have much majesty and is almost peripheral to the action. The winged horse only features in the finale, but the effects as Perseus and his mount fly through Argos avoiding the harpies while the Kraken brings down the city are a kick.

The Kraken has gotten the Godzilla treatment, and I’m fine with that. It’s a genuine kaiju city-crusher, so while it lacks the beauty of Harryhausen’s design, it causes the kind of mayhem that I can really support.

The scorpions are the stand-outs in the monster cast. I never would have imagined this, since the scorpion attack isn’t one of the great sequences from the original. The pacing and staging of the fight, which occurs early in the story, is the film’s highlight, and it feels the closest to an homage of Harryhausen’s style while at the same time making the most of the CGI tech. The scorpions also fill an interesting larger role that I didn’t expect.

The battle with Medusa is the key moment for both movies: it’s the effects set-piece that everyone is squirming in their seats anticipating. The new movie does more right than wrong in its execution . . . but still ends up with the short straw. I love Medusa’s new design and the copying of the infernal temple look of the original. What’s missing, however, is the suspense. The slow build and the massive exhilaration of Harryhausen’s sequence—the new film simply doesn’t have it. The scene is as good as it is probably capable of being, considering that it has to compete against Harryhausen’s stop-motion animation masterpiece.

Bubo the owl has a throwaway cameo, by the way. I think Bubo would have worked out in a bigger part, since the film isn’t pitch-black humorless and could have tolerated a comic clockwork owl. Why not replace the two jokers in Perseus’s team with Bubo? At least Bubo could have given a layer of humanity to Perseus. I also miss Dioskilos (the two-headed dog) and the vulture. It seems strange for a film that depends so much on its monsters to cut out two classics from its source material. Perhaps sneaking in the harpies from Jason and the Argonauts almost unchanged is meant as consolation.

Clash of the Titans Reloaded is heroic fantasy at its most astoundingly serviceable. Go enjoy it (preferably in 2D) with the satisfaction that in five years people will be saying, “Hey, did you know there was a Clash of the Titans re-make a couple of years ago?”

Saw it last night. Dull and dragging. Left the theater very sad…until I remembered the preview for The Expendables – Sly’s 80’s heroes ensemble that just rocked my night.

Raced home and Googled it – found out The Expendables is old news and I’ve been out of the loop since at least mid-2009. Owe it to the CoT marketing sucking me in to find out about this one!

[…] the second fantasy film she’s appeared in this year—she played the new character of Io in the re-make of Clash of the Titans—and she’s perfect for the genre. It’s unfortunate that Gyllenhaal doesn’t connect with her […]

[…] often said that seeing Clash of the Titans (this one, not that one) when I was eight years old was what made me fascinated with the ancient Greeks. It was the point […]

[…] Clash of the Titans right before its re-make was about to hit theaters. I found the re-make more palatable than I expected, although I have since gotten frosty about it after watching it a second time when the DVD came […]

Black Gate » Blog Archive » Immortals Sucks. Sorry I Don’t Have a Funnier Title Than That

Black Gate » Blog Archive » Wrath of the Titans Gives Me a Chimera, But Little Hope

[…] sneake out the trailer for another of their 2012 releases: Wrath of the Titans, the sequel to the 2010 re-make of Ray Harryhusen’s Clash of the […]

[…] of the Titans re-make felt like when I watched for the second time on DVD: a lifeless spectacle. I gave the re-make a decent review on Black Gate back in the day, but any critic knows that his or her first impressions do not […]