It’s a good week to be a fan of fantasy series, with new novels from John Marco and Mark Anthony on the horizon, and a new collection from James Blaylock. After all the heavy hitters of October (Martin, Jordan, Salvatore, Hobb) checked in with 1000-page monstrosities, I’m having trouble keeping up. Oh, for a compact electronic reader… 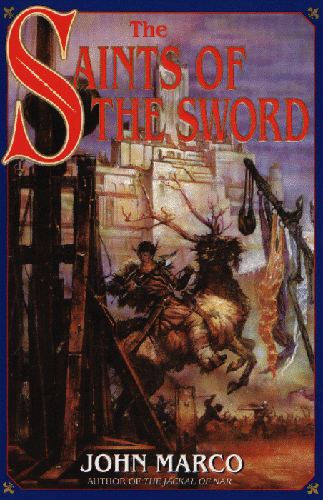 The Saints of the Sword

John Marco burst onto the fantasy scene with his first novel, The Jackal of Nar (1999), a gritty novel of high adventure and romance in the world of Nar. He followed with The Grand Design (April 2000), taking the story in surprising directions, and cementing his reputation as a novelist with a firm grasp of character and action. Now the third and final novel in the Tyrants and Kings trilogy arrives, in which we find a young prince and a Tyrant about to form a daring alliance with a band of rebels…

“Biagio, Emperor of Nar, was once a madman and a tyrant. Now he wants peace. The irony is that no one believes him. Instead, the cruelest of his minions — Elrad Leth, Governor of Aramoor, and King Tassis Gayle of Talistan — are amassing an army to usurp his throne, bringing a new scourge of death to a battle-scarred world. But the wily Biagio, still a brilliantly devious leader, has one more desperate plan. At the heart of the scheme is Alazrian Leth, bastard son of Aramoor’s governor. Barely sixteen, bookish and untrained, this young prince secretly possesses rare magical talents. Biagio sends Alazrian on a near-impossible mission: to convince outlawed priest Jahl Rob and his followers — the fearless Saints of the Sword — to search for the exiled ruler of Aramoor and the mysterious people called the Triin. If these ancient enemies can unite into one great army, a boy’s strange and wonderful magic may be the spark to heal a wounded world… or set in motion an unimaginable betrayal.” 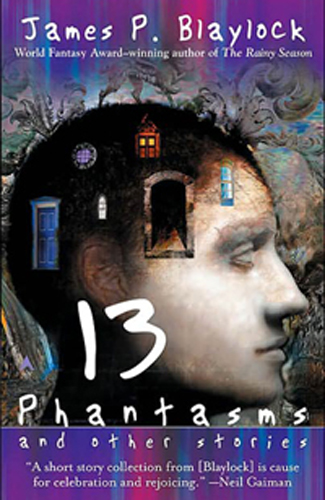 Thirteen Phantasms and Other Stories

James Blaylock’s novels — including Winter Tides, The Rainy Season, and All the Bells on Earth — are some of the most acclaimed modern fantasy in print. If you’re looking for cookie-cutter heroic fantasy with the usual commercial trappings, look elsewhere. Blaylock’s books are as wonderful as they are unique: half urban fantasy, half California whimsy, and half supernatural thriller…. plus a fourth half quirky character study.

For all the attention his novels have gathered, Blaylock’s short fiction has been sadly neglected… a very great pity, since it includes some of the most famous work in the genre, such as the classic “Paper Dragons” (1986) winner of the World Fantasy Award. And some of his best short work appeared originally in expensive limited editions — like “Two Views of a Cave Painting,” published in 1987 by The Axolotl Press — making it a very hard find indeed for the Blaylock completist.

So it’s with great pleasure that I find a new Blaylock collection, published by Steve Pasechnick’s fine Edgewood Press. Unless I’m mistaken, this is the first short story collection from Blaylock to see print, and it covers the complete span of his career, from his first stories in Unearth magazine in 1977 & 78 to the mid-90’s, where his work appeared in The Magazine of Fantasy & Science Fiction, Asimov’s and a handful of original anthologies. While Thirteen Phantasms serves as a fine introduction to Blaylock’s work it’s even more rewarding to readers of his novels, who will find some familiar characters popping up — like Langdon St. Ives, protagonist of Lord Kelvin’s Machine and Homunculus, whose hilarious misadventures are recounted in three tales: “The Ape-Box Affair” (1978), “Two Views of a Cave Painting”, and “The Idol’s Eye” (1983). Recommended. 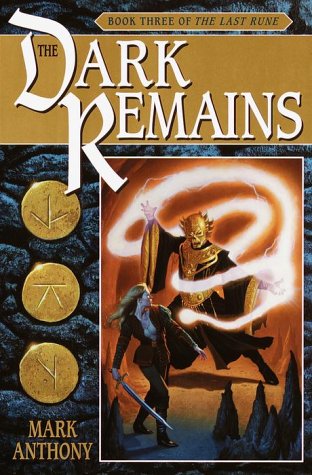 Mark Anthony’s first novel, Beyond the Pale, kicked off a fantasy trilogy which drew a lot of attention — it was named best first fantasy novel of the year by the Rocky Mountain News, among others. Now the series draws to a close with The Dark Remains, due out in March 2001.

“Travis Wilder and Grace Beckett have returned to modern Earth on a mission of mercy: to get medical help for the severely wounded Beltan, a knight from the otherworld of Eldh. But as Beltan lies unconscious in the ICU of a Denver hospital, a shadowy organization plots to kidnap him for use in its cruel experiments, while sinister forces of dark magic cross the boundary from Eldh in a murderous search for Travis and Grace.Meanwhile, in Eldh itself, a young baroness, her witch companion, and their mortal and immortal friends journey to a dying city, there to confront a nameless evil that has begun to annihilate the very gods.Somehow Travis and Grace must save Beltan and themselves, and then make their way back to Eldh, for only in this realm of gods and monsters, myth and runecraft, can they hope to defeat a demonic enemy that can shatter time, devour space, and turn existence into nothingness.” 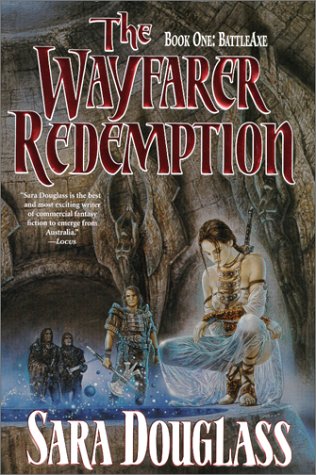 “One young woman, Faraday, betrothed of Duke Borneheld, learns that all she has been told about her people’s history is untrue. Her land lies in the grip of a millennia-old prophecy pronounced by the Forbiden Ones. Gorgrael, the ice-lord, drives south with his demonic frozen army and the ancient Forbidden threaten to once more bring her people under their tyrannical rule. Fleeing to safety from the dangerous land, Faraday rides with Axis, legendary leader of the Axe-Wielders–and hated half-brother of Borneheld. Faraday secretly loves Axis, although it would be death to admit it. She embarks on a journey, which will change her life forever, in search of the true nature of her people. This grand and heroic story tells the tale of one woman’s struggle to learn the truth and change the hearts and minds of her people forever. She fights against oppressive forces and will not desist until everyone knows the truth of the Star Gate.”