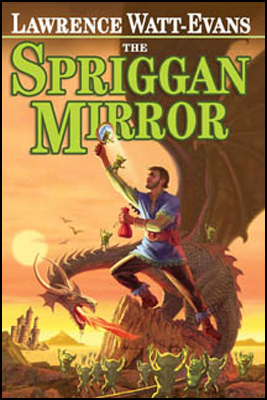 The Spriggan Mirror is Lawrence Watt-Evans’s latest Ethshar book, the ninth of that series to be published. In that sense it is nothing groundshaking — it is very enjoyable, mind you, and very much of a piece with the rest of the series, but what it does has been done before. (Which is not a criticism: that is exactly what we expect and want with this sort of continuing series.)

But in another sense this is rather a unique book. For The Spriggan Mirror‘s publishing history is very unusual. After the previous Ethshar book appeared, the publisher decided not to take any more in the series. It sold respectably, but not as well as Watt-Evans’s other fantasies, and there was perhaps a feeling that he should concentrate on the other books — or that Ethshar’s sales might affect the other books’ sales by affecting the ordering habits of booksellers. However, the Ethshar books have a devoted fan following, who wanted more. So Watt-Evans tried an experiment. He posted draft chapters of the novel on the web, planning to post each chapter once a threshold of donations was reached. (In exchange for donations of a sufficient level-the cost of a final book, pretty much-contributors received the finished copy in book form once it was available.) By this means, by the time the whole novel was posted, contributions would have gone some way towards replacing the publisher’s usual advance, at least to the point of making the novel worth writing. This worked wonderfully, and the whole novel was completed in 2005. A final draft was completed and published in an online magazine in 2006, and now has been published by Wildside Press.

It’s hard to say to what extent this might become a long-term viable publishing method. In this case there were several favorable factors: Lawrence Watt-Evans is a well-established writer with a solid fan base, and indeed the Ethshar series in particular has a strong fan base. And Watt-Evans also has a prominent online presence that presumably helped promote the scheme. Be that as it may, it has to be said it worked nicely. And in fact Watt-Evans has just completed the online serialization, by the same method, of yet another Ethshar novel, The Vondish Ambassador. (Details of all this can be found at Lawrence Watt-Evans’s website.)

But what is the novel really like? It’s a somewhat direct follow-on to With a Single Spell, though it is definitely not necessary to have read that book to enjoy this one. The main character is Gresh, who sells ingredients to magic users. Gresh is a fairly ordinary man, though quite successful at his business, and part of a family of magic users of various kinds. (One of the key features of the Ethshar books is that there are many different varieties of magic, each with its own rules, strengths, and costs.) Gresh is approached by a witch, Karanissa, who wants to hire him to help her and her husband, the wizard Tobas, and Tobas’ other wife, Alorria, to find the enchanted mirror that seems to be the source of spriggans. (The history of Tobas, Karanissa, and Alorria is detailed in With a Single Spell, and spriggans are a feature of other Ethshar books.) Spriggans are small, semi-intelligent, creatures that have become a growing menace in recent years in Ethshar. And apparently it is Tobas’ fault-spriggans all come out of an enchanted mirror, which Tobas lost.

The novel, then, follows Gresh and Karanissa and Tobas and Alorria as they track down the mirror. There is never any doubt that they will find it — but what is interesting is the sensible way things work out. This ranges from the price Gresh charges for his services, to the way he figures out where the mirror is, to the way the four people interact, and the eventual solution to what might have been a tricky sexual situation after Gresh (who has an active sex life) becomes attracted to Karanissa. Especially satisfying is the very logical explanation for the spriggans, and the logical and humane solution to the problem of spriggans. I’ve said many times that the most salient feature of Watt-Evans’s books is their common sense — the way that people in them react to events the way I think most people really would, and the way people are imperfect but not evil, and the simple groundedness of the themes of the books. I should not fail to add that the novels are very entertaining, supremely readable, humorous without being outright comedies — “light” in the best way. I quite enjoyed The Spriggan Mirror, and I think most readers will.

One thought on “Fiction Review: The Spriggan Mirror by Lawrence Watt-Evans”