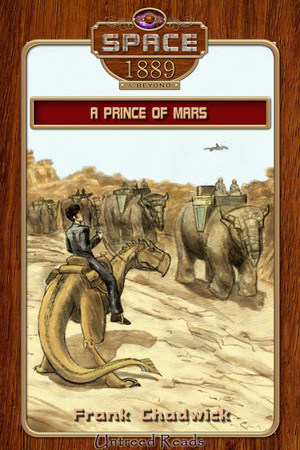 For me the greatest benefit of the e-book revolution is low expectations coupled with low prices. For 99¢ or $4.99 or anyplace in-between, I can take a chance on an unfamiliar author and download a novel or collection onto my Android, then read a few pages whenever I have a lost moment — usually while waiting somewhere for somebody. I’ve pulled a few stinkers, but then again I’ve also spent more on bad cups of coffee too. And, occasionally, there’s that casino-win kick when I unexpectedly discover a polished thrill-ride like A Prince of Mars.

Space: 1889, first published in 1988 as an RPG/miniatures wargame, is a mash-up of H.G. Wells’ The First Men in the Moon and Burroughs’ Barsoom and Amtor novels. The setting is an alternate history in which space flight was pioneered in the late nineteenth century. With its emphasis on Her Majesty’s presence on Mars, the result is the British Raj transplanted to the canals and deserts of a dying world, alongside flying ships made from Martian liftwood, the setting’s answer to cavorite. I suspect the focus on Great Game political machinations and aerial skirmishes appealed more to the wargamer than the hack-and-loot dungeon delver, allowing Space: 1889 to persevere to the modern day through its small but dedicated audience. Well — that and the fact Frank Chadwick, as both writer and publisher, maintained the rights to his creation and therefore didn’t allow it to drown in the industry quicksands of neglect, copyrights, and petty feuding, which is so often the case.

END_OF_DOCUMENT_TOKEN_TO_BE_REPLACED 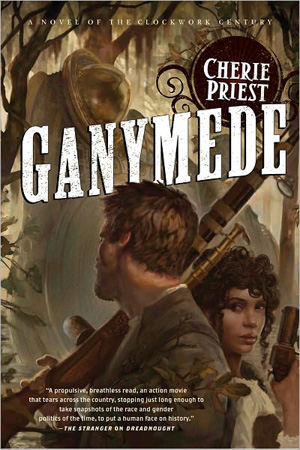 On the eve of the fall and subsequent occupation of New Orleans by the Union in 1862, lawyer and amateur engineer Horace L. Hunley, along with his two investment partners, scuttled their submarine Pioneer in a canal to prevent its seizure by the Federals. They may, or may not, have likewise scuttled a second submarine near Lake Pontchartrain; there are no records for this sub and its design departs from Hunley’s other efforts. The trio fled to Mobile, Alabama, to build another sub, which sank, and yet another, the H.L. Hunley, which drowned its namesake, then successfully torpedoed the Union blockade ship Housatonic before itself swamping in Charleston Harbor during its return.

In the alternate history of Cherie Priest’s latest Clockwork Century novel, Hunley and his partners constructed a fifth submersible, the titular Ganymede, which sank near New Orleans. The Civil War has stretched into the late nineteenth-century and the city is occupied by the Confederate-allied Republic of Texas. Now a team of pro-Union guerrillas has recovered Ganymede and, hopeful the machine can end the war in the Union’s favor, intends to transport it down the Mississippi River — past the Texians searching for it — to a waiting U.S. battleship in the Gulf. All of this is orchestrated by freedom fighter Josephine Early, a black whorehouse madam and Union agent. With no one experienced enough to pilot the sub, Early hires airship captain Andan Cly (who also happens to be her ex-lover, natch) to “fly” Ganymede under the river and the Texians’ noses to the rendezvous.

Priest has cooked together espionage, a rich setting, intriguing characters, and a plot that could have been stolen from Alistair Maclean. It’s a great gumbo — providing you ignore there’s not an ounce of suspense to be tasted. Spoilers ahoy!