The Best Novella category was not one of the original Hugo categories in 1953. I twas introduced in 1968, when it was won by Philip José Farmer for “Riders of the Purple Wage” and Anne McCaffrey for “Weyr Search.” Since then, some version of the award has been a constant, with the exception of 1958. In 1980, the awards were presented at Noreascon II in Boston.

The Nebula Award was created by the Science Fiction Writers of America (SFWA) and first presented in 1966, when the award for Best Novella was won by Brian W. Aldiss for “The Saliva Tree” and Roger Zelazny for “He Who Shapes.” The award has been given annually since then.

The Locus Awards were established in 1972 and presented by Locus Magazine based on a poll of its readers. In more recent years, the poll has been opened up to on-line readers, although subscribers’ votes have been given extra weight. At various times the award has been presented at Westercon and, more recently, at a weekend sponsored by Locus at the Science Fiction Museum (now MoPop) in Seattle. The Best Book Novella Award dates back to 1974, when the short fiction awards were split into Short Fiction and Novella lengths. Frederick Pohl won the first award. In 1980. The Locus Poll received 854 responses.

In January, I wrote about Barry B. Longyear, the winner of the John W. Campbell Award in 1980 and explored the vast amount of fiction he published in 1978 and 1979. At that time, I dismissed his biggest hit with a single line, “His breakout story, of course, was “Enemy Mine,” which will be covered in more depth in the article on that novella’s various awards for the year.” Now is come the time to discuss that story.

END_OF_DOCUMENT_TOKEN_TO_BE_REPLACED

The Hugo Award was first presented at the 11th World Science Fiction Convention (sometimes called Philcon II), held in Philadelphia from September 5-7, 1953. No short fiction awards were presented the first year. In 1955, the first award for Best Novellette, not yet known as a Hugo Award, was given to Walter M. Miller, Jr.’s “The Darfsteller.” The award for Best Novelette was not presented in 1957 or 1958, returned in 1959 and then disappeared until 1967. It was on hiatus again from 1970 through 1972 and became a permanent ficture in 1973. The Hugo Awards are nominated and voted on by the members of the World Science Fiction Convention. Martin won two Hugo Awards in 1980, for “The Way of Cross and Dragon” in the Short Story Category and “Sandkings” in the Novelette category. He had previously won a Hugo for his novella “A Song for Lya” in 1975 and would win a second novella award for “Blood of the Dragon” as well as a Best Dramatic Presentation: Long Form Hugo for season 1 of Game of Thrones. The only fiction category in which he has not yet won a Hugo is the Best Novel category. In 1980, the Hugo Award was presented at Noreascon Two in Boston, Massachusetts on August 31.

The Locus Awards were established in 1972 and presented by Locus Magazine based on a poll of its readers. In more recent years, the poll has been opened up to on-line readers, although subscribers’ votes have been given extra weight. At various times the award has been presented at Westercon and, more recently, at a weekend sponsored by Locus at the Science Fiction Museum (now MoPop) in Seattle. The Best Book Publisher Award dates back to 1972, although in 1975 and 1976 the Publisher Award was split into paperback and hardcover categories. Ballantine Books won the award each year from its inception through 1977 (winning the paperback for the two experimental years with the Science Fiction Book Club winning the hardcover award). In 1978, when Del Rey was established as an imprint of Ballantine, Ballantine/Del Rey began winning the award. The award was not presented in 1979 for works published in 1978, but when it was reinstituted in 1980, Ballantine/Del Rey picked up its winning streak. In 1980. The Locus Poll received 854 responses.

In many ways, “Sandkings” is a predictable story. Simon Kress is depicted from the start as arrogant and cruel. Although the world of Baldur is not particularly well depicted, based on Kress’s personality and actions, the world seems to provide a breeding ground for a decadent society, at least the part of it that Kress is part of, although Martin does indicate that he has some sort of business that he must occasionally attend to which provides him with the means to pursue his decadent lifestyle, which centers on the collection, exhibition, and eventual discarding of various exotic animals/aliens.

END_OF_DOCUMENT_TOKEN_TO_BE_REPLACED

The Nebula Award was created by the Science Fiction Writers of America (SFWA) and first presented in 1966, when the award for Best Short Story was won by Harlan Ellison for “‘Repent, Harlequin!’ Said the Ticktockman.” It has been given annually since then. Ed Bryant won the award in 1979 for his story “Stone” and again in 1980 for the story “giANTS,” the first time an author won the award back-to-back.

Ed Bryant’s “giANTS” is a strange work of almost fan fiction. It is set in a world in which them 1954 B movie Them! has taken on immense importance. Main character Paul Chavez dreams himself in the movie, with himself in the role of the protagonist, and upon waking has a difficult time separating reality from his dream. Chavez also finds himself the subject of a relentless reporter, Layne Bridgewell, who is seeking an interview with him, one he only begrudgingly gives.

It takes a while to determine the actual role of Them! in the story since it seems to be a film that Chavez and Bridgewell have both seen and are aware of. At the same time, there is definitely something occurring with insects throughout the world and Bridgewell has lost family to bees while Chavez’s wife was killed by fire ants.

It eventually turns out that rather than being the nightmare scenario Chavez fears, Them! provides the solutions to the problem of a world in which normal insects run amok. Bryant cleverly takes the biggest scientific inaccuracy of the film and turns it on his head, allowing Chavez to realize that creating a means of increasing the insects size is the fastest way to destroy them, due to the square-cube law.

END_OF_DOCUMENT_TOKEN_TO_BE_REPLACED

Peter Graham is often quoted as saying that the Golden Age of Science Fiction is 12. I was reminded of this last year while reading Jo Walton’s An Informal History of the Hugo Awards (Tor Books) when Rich Horton commented that based on Graham’s statement, for him, the Golden Age of Science Fiction was 1972. It got me thinking about what science fiction (and fantasy) looked like the year I turned twelve and so this year, I’ll be looking at the year 1979 through a lens of the works and people who won science fiction awards in 1980, ostensibly for works published in 1979. I’ve also invited Rich to join me on the journey and he’ll be posting articles looking at the 1973 award year.

The Hugo Award was first presented at the 11th World Science Fiction Convention (sometimes called Philcon II), held in Philadelphia from September 5-7, 1953. That year the award for Best Novel, not yet known as a Hugo Award, was given to Alfred Bester’s The Demolished Man. The awards were not perceived as an annual event at that time and, in fact, no awards were presented the following year. They were presented again in 1955 and have been presented annually since, although in 1957, the Best Novel category was not included. The Best Novel Awardhas been referred to, with some tongue in cheek, as “the Big One” and is generally the last one announced at the ceremony. The Hugo Awards are nominated and voted on by the members of the World Science Fiction Convention. Clarke won the Hugo Award for Best Novel twice, for Rendezvous with Rama in 1974, and for The Fountains of Paradise in 1980. In 1980 the Hugo Award was presented at Noreascon Two in Boston, Massachusetts on August 31.

The Nebula Award was created by the Science Fiction Writers of America (SFWA) and first presented in 1966, when the award for Best Novel was won by Frank Herbert for Dune. It has been presented annually since then, with a tie in 1967 when it was won by Samuel Delany for Babel-17 and Daniel Keyes for Flowers for Algernon. Clarke won the Nebula Award for Best Novel twice, for Rendezvous with Rama in 1974 and for The Fountains of Paradise in 1980.

It has been several decades since I read The Fountains of Paradise, and re-reading it I realized that I had no real memories of it at all. I remembered that the central point of the book was to build a space elevator from a peak in Sri Lanka (repositioned and renamed Taprobane in the novel), but absolutely nothing else.

END_OF_DOCUMENT_TOKEN_TO_BE_REPLACED 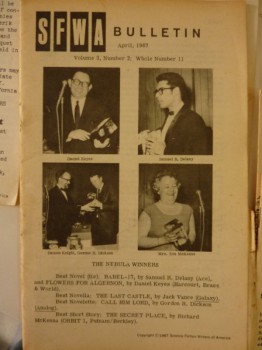