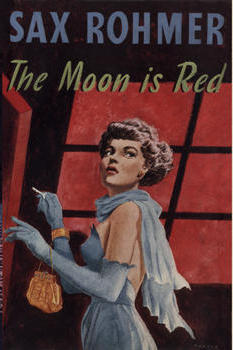 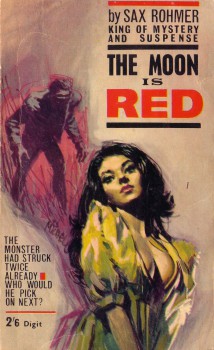 The Moon is Red was first published in the UK in hardcover by Herbert Jenkins in February 1954. A paperback edition from Digit Books followed in 1964. The first US edition was published by Bookfinger as a limited edition hardcover in January 1977. It was the last non-series Rohmer novel. While far from his best work in my view (the author was already 70 years old at the time of its writing), it is certainly of interest as a curio to devotees.

The late Rohmer scholar, Dr. Robert E. Briney (editor and publisher of The Rohmer Review) considered it the best of Rohmer’s last dozen books. In my view it is far inferior to Virgin in Flames (1952) and even less successful an effort than Bianca in Black (1958) which was written by (or at least credited to) the author’s wife. The authorship of those late period works has always been a matter of contention by fans. While Rohmer certainly never employed professional ghost writers, both his wife and his protégé and secretary, Cay Van Ash were indispensable to him in later years. Their names appear with his on a number of radio and television scripts he authored during this period. When questioned on the matter in the 1970s, Van Ash maintained he only served as a typist and did minor editing of manuscripts while the author’s widow stated her input was limited to discussing plot points and occasionally suggesting story ideas (she claimed the first Sumuru story was her original concept). Regardless, Rohmer’s best fiction of the 1950s was largely confined to the short story market as his full-length novels more evidently display the frailties of age and the passage of time to their overall detriment.