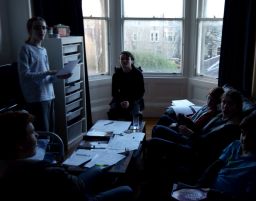 A house full of teens playing I Love the Corps!

“Use the black hole gun!”

Yes the house is full of teens playing a review copy of indy game I Love the Corps, a self-consciously SciFi game which hits the notes of 90s Military SF, with a dose of Aliens, plus video games like Call of Duty and Mass Effect (the referee’s book has a handy appendix of inspirations, including music). The lads range from 12 through to 16, with my son Kurtzhau, 14, in the middle and in the thick of it refereeing an ambitious one-shot he’s crafted involving rebel humans and sinister uploading aliens, epic scale space dreadnoughts, and more twists than a sack-full of broken micro USB cables.

END_OF_DOCUMENT_TOKEN_TO_BE_REPLACED

35 years and those words still send a chill run down my spine.

I can even see the shelf in the now defunct gaming shop on Edinburgh’s Forest Road. I was there to pick up Chivalry and Sorcery. Even at thirteen, I was a howling medievalist and that game seemed like it would be my game.

However it was a box of little black books — Traveller RPG! — that I came away with that day.

Sure, I’d played it before… briefly… with a kid in the year above and I’d liked firing pulse lasers and negotiating the mean streets of human space.

However, I hadn’t seen the possibilities.

END_OF_DOCUMENT_TOKEN_TO_BE_REPLACED

We interrupt normal programming to draw your attention to two roleplaying-related Kickstarter campaigns!

First we have a fast-paced Military SF Horror game.

Earlier this year at Conpulsion, I had the fun of playing the beta version of I Love The Corps. My son — 12 — and his mate — 13 — also had a go and loved it.

Rather, this is the kind of game where Special Forces in powered armour exchange laser fire on the surface of Mars, while ground support drops combat trucks reminiscent of Warthogs.

The rules nicely balance story simulation with tactical gaming  — there are the usual points you can exchange  for stunts and stunning escapes, but ultimately the dice are a harsh mistress… which lends an edge to the experience.

Not only is action structured around cinematic scenes and montages, the mechanics support it! There is a neat system for automatic ability check scores when doing something in what I would think of as narrative summary. Characters can also satisfyingly rampage through low powered NPCs. Most of what you need is on the character sheet. The end result is fast-paced but substantial.

Go check out the Kickstarter page and take a look at the more detailed material there.