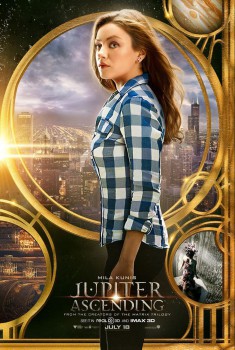 Jupiter Ascending has gotten a great deal of attention since its release. Generally not the kind of attention most movies want, especially when they come with a price tag that eclipses the annual budgets of some nations. It has been eviscerated by critics while quickly gaining cult status and a loyal fandom. In short, everyone has an opinion on this one. And far be it from me to stay out of an argument.

I’m not going to try and convince you of the quality of Jupiter Ascending. It is indisputably gorgeous. It is also indisputably plagued with plot holes that wouldn’t make it past a Creative Writing 101 professor. It’s a love note to The Fifth Element, Flash Gordon, and Barbarella while presenting women viewers (the film’s most ardent fans at this point) with something we don’t usually get: wish fulfillment aimed at us. But in the midst of this beautiful mess is a subversive meaning that goes deeper than most critics realize. Some commentary describes the movie as having an “anti-corporate” message, and while I think that’s accurate it’s also an understatement.

Jupiter Ascending doesn’t have an anti-corporate subtext. The entire piece is a manifesto against modern corporate capitalism. That message is such an integral part of the movie that it is often the very thing that undermines the story. Let’s face it: there are two critical storytelling rules that are commonly broken by very successful artists. The first is Never Outgrow Your Editor (George, JK, I’m looking at you.) The second is Never Let the Metaphor Run the Movie. All sci-fi, and really all fiction, has meaning beyond the bare story on the page. But when the message becomes the story, things go awry. In this case, that means plot holes have been left intact to preserve the metaphor to the detriment of the overall product.

(And here comes the obligatory warning: here there be spoilers.)