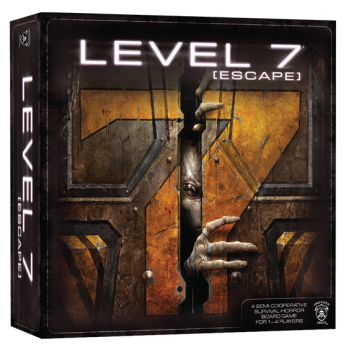 Ever have one of those days where you wake up disoriented in an underground government laboratory, surrounded by military guards and alien clones? Yeah, me neither … that is, until I got the cooperative board game Level 7 [Escape] (Amazon) from Privateer Press.

I’ve reviewed several Privateer Press games before and one of my favorite things about their games is the strong emphasis on story. Level 7 [Escape] is no exception to this trend, as between 1 to 4 players (Yes, it can be played as a solo game.) use cunning, speed, and brawn to negotiate their way through 7 levels of terror in the hopes of reaching the surface before the base goes into full lockdown. What’s up with the alien clones? Why were they released from their cryogenic chambers? Who is orchestrating all of this? Will the escaping prisoners be able to work together and make it to the surface in time?