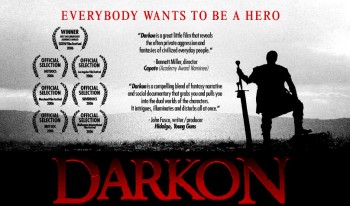 As a follow-up to last week’s post on Escapism, I give you Darkon (2006), a low-budget documentary  by Andrew Neel and Luke Meyer that raises some of the same questions I did in my post as it looks at one particular group of LARPers (Live-Action Role-Players) involved in a game that has become its own little reality. Following the lives of a few key players in the drama, the documentary (which I watched free on Hulu after John Ottinger pointed it out, though it is also available from snag films) chronicles their in-game and out-of-game struggles, and how these facets of their lives intertwine.

If your initial reaction to adults pelting each other with foam swords is to roll your eyes, that’s probably even more reason to watch this documentary, which is a sympathetic and nuanced look at the lives of these players. Firstly, the film is presented as a real struggle for ‘in-game power’ between its two central characters, leaders of rival ‘countries.’ These competing factions of Darkon chart their progress in wars that allow them to expand across a map, and one faction, the nakedly imperialistic Mordom, has had more success at this than the rest. Feeling threatened, other countries lead by Laconia, band together to fight them.