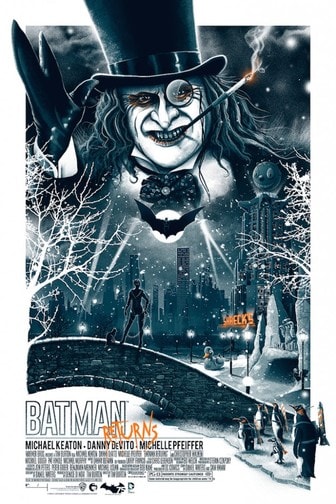 Mistletoe can be deadly if you eat it…

Why do we fall in love with a specific work of art that to others is either an object of mere curiosity or full derision? How does a bizarre novelty gizmo leap out of the pile of toys and become beloved? It boils down to a simple, elegant question: Why does this speak to you?

I’m glad to hear a spirited defense of a book or film that’s never meant much to me but means the universe to another. Sure, you love Jaws, because everybody loves Jaws. I want to hear about your non-ironic embrace of Exorcist II: The Heretic. Lay it on me. I’ll learn something.

The weird wind-up toy I present to you this Winter Solstice Season: Batman Returns, the second of the Tim Burton-Joel Schumacher Batman Quartet — and my personal favorite Christmas movie. This might not be a stunner of a revelation considering my holiday movie pick last year was Rasputin the Mad Monk. I was stretching to find a Hammer movie with something akin to seasonal dressing. So… it’s Russia, it’s winter, there’s lots of red wine. Fine, call it a Hammer Christmas movie.

There’s no stretching necessary with Batman Returns. To me, it’s a Christmas movie. No irony or smirk. It was released during the summer of 1992, but now it’s difficult to envision it outside of winter (and I was there in the theater that summer). Imagine the busy New York mall from Miracle on 34th Street,* except it’s run by Ebenezer Scrooge, and he’s in league with an aquatic bird version of Uriah Heep dwelling in the sewer. Now picture Charles Dickens, Edward Gorey, and F. W. Murnau getting into a three-way knife fight over the corpse of Clement Moore, and Fritz Lang filmed the whole thing and put it in theaters for a holiday release. Think of a Christmas tree decorated with all the holiday trimmings, but leathery bats and black cats peer from between the needles. That’s Batman Returns and my idea of a festive December.

END_OF_DOCUMENT_TOKEN_TO_BE_REPLACED 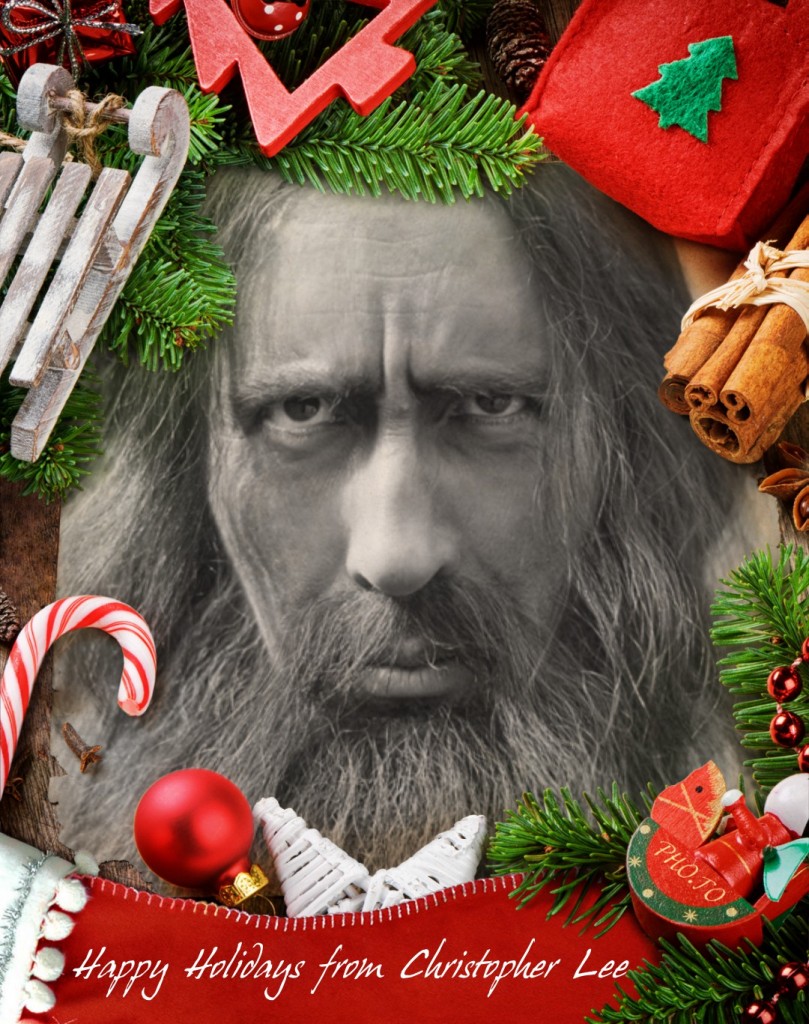 When October disappears over the horizon, horror movie DVDs and Blu-rays go into hiding, and streaming services store their terror title watchlists away for another day. But a certain type of off-kilter movie survives through the end of the year. The winter holidays usher in bizarre “ironic” seasonal favorites. You’ll probably watch Die Hard. Me, I’m a fan of Batman Returns when it comes to dark festive cheer. And Gremlins. We can add The Krampus to the list of holiday-themed horror flicks. Your family may insist on National Lampoon’s Christmas Vacation, although if you’re of my mind you’d prefer your cartoony Christmas violence via Home Alone. Or In Bruges. The Lord of the Rings films have a certain holiday vibe, and the same goes for the Harry Potter saga. If you want to take in a Bond movie for the Yuletide, there’s On Her Majesty’s Secret Service … although you may wish to shut it off two minutes before the end.

But is there a place for Britain’s legendary Hammer Film Productions during Winter Solstice? After the 31st of October, do the Hammer DVDs and Blu-rays need to stay put by the Demon Elf on the Shelf?

No, I say! Hammer has a seasonal holiday treat, Rasputin the Mad Monk (1966). Okay, maybe only I consider it a holiday watch, but I’d like to share it with you.

Rasputin the Mad Monk is not a horror film. I have to make this clear upfront. Although released in many territories on a double bill with The Reptile and later paired with The Devil Rides Out on its first DVD release, Rasputin the Mad Monk is a historical melodrama with violent flourishes. Because the Hammer name is so synonymous today with “horror,” we forget that Hammer Film Productions was a busy studio that also put out comedies, science fiction, crime dramas, psychological thrillers, historical costume pictures, and adventure movies. Their reputation for horror ended up affecting the marketing of some non-horror fare: The Hounds of the Baskervilles (1959), a straight Sherlock Holmes adaptation, was sold with a drooling spectral wolfshead on the posters. Captain Clegg (1962), a swashbuckler about smugglers, was rechristened Night Creatures in the U.S. for no reason except that the distributor had that title lying around and wanted an excuse to use it.

END_OF_DOCUMENT_TOKEN_TO_BE_REPLACED

Lately I’ve become interested in what may be termed “seasonal” books — stories or novels that are perennially suited for a particular time of year. I long have considered Hope Mirrlees’s Lud-in-the-Mist a spring book. Natalie Babbit’s Tuck Everlasting is a summer book. The fall season has any number of offerings: Ray Bradbury’s Something Wicked This Way Comes, the anthology October Dreams, Washington Irving’s “The Legend of Sleepy Hollow,” and this last fall I discovered John Masefield’s The Midnight Folk.

Perhaps in due time I will look at this last in more detail, but for now I want to examine Masefield’s “Christmas Book,” The Box of Delights, something that sits well alongside Charles Dickens’s A Christmas Carol, Dr. Seuss’s How the Grinch Stole Christmas, and Clement Clarke Moore’s “A Visit from St. Nicholas.”

The Box of Delights was published in 1935 and, like The Midnight Folk, contains many delightful period terms. I choose as just one example the word “scrobble,” which means to kidnap. In this book, all sorts of people get scrobbled. The antagonist of this book, Abner Brown, who also is the antagonist of The Midnight Folk, is attempting to steal the Box of Delights from “Punch and Judy man” Cole Hawlings, who has entrusted the Box to Kay Harker, the protagonist both of this book and of The Midnight Folk. Brown scrobbles Hawlings and, unable to get any information out of that magician, scrobbles anyone who was in the vicinity of Hawlings: two of Kay’s friends and all of the clergymen and servants attached to the Tatchester Cathedral. By the end of the book, the crisis of the tale becomes in equal measure one of keeping the Box from Brown’s villainous clutches and one of returning all of the religious to the Cathedral in time to hold the Christmas services at midnight.