So, you’ve finished your latest issue of Black Gate, and now you are wondering what other magazines feature fantasy in the short form that you might enjoy. Here are a few — hardly complete — suggestions. 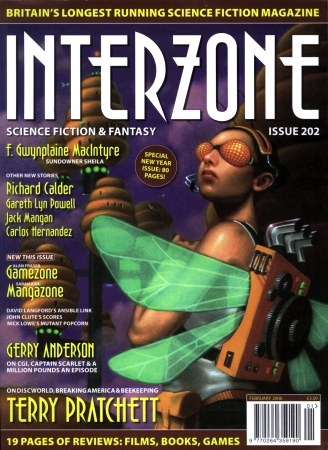 Editor/publisher Andy Cox’s resurrection of Interzone has made this self-proclaimed “Britain’s longest-running science-fiction magazine” a leading choice for edgy stories showcased in a striking visual design that pays tribute to the pulp tradition in a high glossy style. Given that Cox also published The Third Alternative, which featured dark horror/fantasy, some people were concerned that the “new wave” of science fiction on which the magazine originally cut its teeth might get sidelined. In fact, almost the opposite has happened, with Cox printing some very interesting SF while sidetracking The Third Alternative, now rechristened Black Static. (No issue has appeared since 2005. Cox has promised a re-launch date sometime soon. Stay tuned.)

Though Interzone emphasizes SF, it doesn’t neglect fantasy — after all, it has “Science Fiction & Fantasy” printed right below the masthead. Case in point is longtime contributor Richard Calder’s novella “After the Party,” which bears less resemblance to Stephen Baxter and more to the Marquis de Sade. Readers familiar with Calder’s Dead Girls, Dead Boys, Dead Things trilogy and Cythera will recognize the artful depravity displayed here. Prostitutes imported from Babylon — a parallel dimension that somehow split off into its own timeline for the express purpose of providing training in sacred sexual arts — service clients in an alternate Victorian England called Earth Prime. An aspiring whore seeking her first professional climax encounters a member of the subversive Jack the Ripper Society, which believes that revolution depends on ridding society of the prostitutes. A strange — make that exceedingly strange — love story ensues. “After the Party” was published in three installments over issues #201 to #203, in keeping with the genre’s tradition of serialization and harkening back to the time when almost all SF and fantasy novels appeared first as serials. Even Frank Herbert’s Dune was originally a serial started in the December 1963 issue of Analog.

The fiction in the current May/June Issue #204 also leans toward the fantasy side and wouldn’t be entirely out of place in The Third Alternative/Black Static. There’s an overarching theme of irredeemable loss, and while many stories are set in the future or on other worlds, the tales are less science fiction than fabulism. The strongest is the lead story, “Longing for Langalana” by Mercurio D. Rivera, which depicts a species infatuated with human beings and how one member of this race deals with unrequited love in a very human (i.e. not overly sensible) way.

Some of the other stories in the issue include “The Song” by Time Akers, in which the protagonist undergoes severe body enhancements to make himself an instrument for his muse, only to find the small success achieved is as ephemeral as his inspiration. “Palestina” is an alternate history in which the state of Israel does not come into existence after World War II; history buffs of the period may be intrigued by author Martin J. Gidron’s speculations, but as a piece of fiction I found it less than compelling. I’m not sure what to make of “The Rising Tide” by someone with an initialized byline, C. A. L. The imagery is sharp in this tale of betrayal, and it might make a good movie, but I’m not sure all the artifice is much more than just that. Possession by aliens is a staple of SF and horror, but the twist in “Summer’s End” by Jamie Barras examines how someone might feel when that possession ends.

My other favorite story from this issue is “A Short History of the Dream Library” by Elizabeth Hopkinson, who gained her berth in magazine by winning the 2005 James White Award for new writers. In a kind of cross between Borges and Robert Sheckley, a man goes to great lengths to protect his dream, even if it is always the same one. 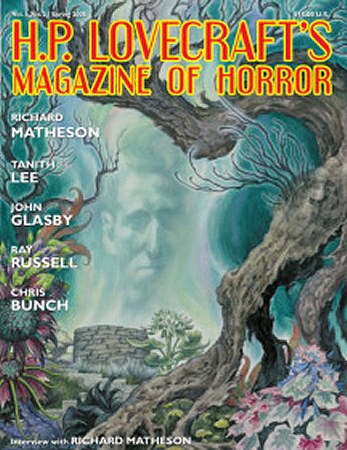 While Interzone reinvents the pulp tradition, H.P. Lovecraft’s Magazine of Horror replicates it, both in look and content. The term “pulp” comes from the cheap wood pulp paper on which such magazines were published from roughly the 1910s through the early 1950s. The reason was economics, and I assume cost is why Lovecraft’s follows the tradition of printing on lower-cost paper. Evidently, they haven’t quite gotten their arms around production costs, as the latest issue has a cover date of Spring 2005; the magazine has yet to complete the four issues that would constitute a year’s subscription. Editorials in the two issues that I have (numbered 2 and 1.5, the latter because it should have appeared in spring 2004 but was delayed until Fall) complain of distribution problems. There is no website per se for the magazine, but you can order any of these issues directly from the publisher.

Of course, the magazine’s title indicates that “pulp” is not only an economic decision, but a creative one as well. The stories are, well, “Lovecraftian,” characterized by a nightmarish quality in which civilized people are corrupted by an evil influence, frequently personified by a race of creatures akin to Lovecraft’s Cthulhu Mythos. Lovecraft was published in pulps such as Weird Tales (the current version of which is now published by Wildside Press), which were and still are denigrated as formulaic escapist trash. Ironically, Lovecraft’s collected works have recently received some literary legitimacy as part of the Penguin Classics series of important world literature.

The magazine presents a mix of familiar and new names. Charles Coleman Finlay (whose “The Nursemaid’s Suitor” appears in Black Gate #8 Summer 2005 and “The Political Officer” from F&SF was a Gardner Dozois Year’s Best Science Fiction for 2003) contributes a predictable albeit mildly humorous take on the notion of hungry hidden aliens in Issue #1.5’s “The Smackdown Outside Dedham.” Instead of Lovecraft’s cultured man as a hero, Finlay presents redneck Tommy Decker and his hound dog Boomer looking to cash in on a recent meteorite crash on the outskirts of town to finance a ticket to a wrestling match. It won’t be giving too much away to reveal that Tommy doesn’t get to see his idols in tights and instead must take a fall.

Similarly predictable is Chris Bunch’s “I Who Am Nothing,” about a human mutation that destroys the world in order to save it. Marc Bilgrey’s “Killing the Pain” is a little too pedestrian, even as he works the Lovecraft elements in a tale of a near-miss disaster that has an Oprah-like redemption. The magazine also prints short-shorts with a supposed “surprising” punchline — Melissa Kirkwood Lewis in “My What Big Teeth They Have” does a nice kind of twist on the old saw of child predators getting their due, and “One Day at a Time” by Charles Black provides an explanation for the killing of three brothers. Guess who wants to wipe out the Day siblings?

Issue #2 features an interview with and critical commentary about Richard Matheson, a writer for fabled television series The Twilight Zone and the perhaps less fabled Night Gallery, as well as the screenplays for movies like The Last Man on Earth (from his short novel I Am Legend). Although Matheson apparently no longer writes short fiction, a previously unpublished short story, “He Wanted to Live,” makes its debut here. While it vividly portrays the protagonist’s extremely neurotic tendencies, the ending pivots on a gimmick that submission guidelines typically warn will result in rejection. That this was an unpublished story perhaps reflects that such a judgment was made, Matheson’s considerable reputation notwithstanding.

The best story is Tanith Lee’s “Where Does the Town Go at Night” which slightly subverts the Lovecraftian horror so that it may actually lead to a man’s redemption rather than his fall. 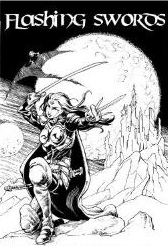 The pulp tradition does not necessarily have to be printed on cheap paper. Indeed, Flashing Swords does it with pixels. Here I must admit a prejudice. Like everyone else, I lamented the passing of SCIFICTION (though its stories are still archived at scifi.com/scifiction) edited by Ellen Datlow. But despite the major names and high quality, as well as the practice of reprinting classic stories along with original fiction, the fact is I didn’t read it all that much. I just don’t enjoy reading stories on a screen. That may have something to do with my age. Some studies indicate that the brain processes pixels on a screen differently from typeface on a page, and that presumably upcoming generations used to both since a young age will no longer suffer such a disorientation between the two. I, on the other hand, still buy vinyl records. So forgive my old fogeyness.

Still, unquestionably the future of niche publishing lies with the Internet. The niche for Flashing Swords is, as you might expect, adventure fantasy. The webzine gets its moniker from the phrase: “Sing me this dull realm, harper, I would have tell of brave deeds and Flashing Swords” that appears at the top of its cluttered pages. Edited by Howard Andrew Jones (full disclosure here: Jones has recently accepted the managing editor position at Black Gate), the latest issue I’ve seen features stories by James Enge, Steve Goble, Paul Jessup, Howard Lamb, Trey Causey, S. C. Bryce, and Robert Burke Richardson. As you would expect, the tales deal in one form or another with “sword-and-sorcery,” a term coined by Fritz Leiber for stories about swashbuckling heroes engaged in exciting and violent adventures, and perhaps tinged with elements of romance and magic, set in some kind of ancient alternate reality. While not essential, humor is often an ingredient. Case in point is Enge’s “A Covenant with Death,” one of a series of stories about Morlock the Maker, whose adventures have also appeared in Black Gate. The tale here is about the apprentice-master relationship, with the twist being that the two don’t much like each other.

Richardson’s “The Dead God’s Punishment” carries on in the pulp tradition of installment publication, which may seem odd for a webzine with presumably the room to publish an entire story, but which possibly recognizes that viewing screen after screen may be off-putting to some; it might also just be the time-honored gimmick to lure readers back to the next issue.

If you’re a fan of sword-and-sorcery, you may have heard of Harold Lamb, a contemporary of Conan creator Robert E. Howard. Although Howard is more well-known today, Lamb was the far more popular writer in his time and had a significant influence on Howard’s writing. Lamb’s predecessor to Conan the Barbarian is the semantically ironic Khlit the Cossack. Flashing Swords has taken up the task of keeping Lamb’s work in print, so to speak, though, interestingly, editor Jones believes the Cossack stories are too long for an online publication. They are currently available in two volumes from Bison Books. “An Edge to a Sword” concerns Khlit’s compatriot, Ayub, whose swordsmanship skills are abetted by a skilled swordmaker.

Flashing Swords is thematically the most closely related to Black Gate, which explains the recent editorial synergies between the two. Although access is free, donations are appreciated. Also, the webzine is part of a larger sword-and-sorcery site that includes a discussion board, reviews, and interviews, as well as a book publisher. A promising adventure awaits all comers.