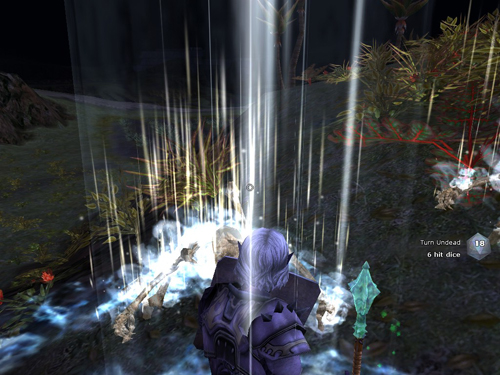 Now more than a year old, Dungeons & Dragons Online (DDO) has matured from a gawky, incomplete massively-multiplayer online role-playing game (MMORPG) featuring a level cap of 10 and content game-playing maniacs could work through in a month to a more stable, feature-rich game with a level cap of 14 and content developed to a depth that even maniacs might find daunting.

Last month’s review took a quick peek at how one might start playing DDO. This month the focus is on intermediate levels of play and on different ways players might approach gameplay in this complex virtual playground.

Players who have spent even a little time playing will after a week or two find themselves with characters able to take on bigger challenges than are offered in the harbor. The quintessential harbor quest is a multi-quest sequence fighting kobolds in the sewers (the Waterworks); other early quests are found in The Wayward Lobster. What next?

In the marketplace, steam tunnels house the standard follow-up quest to the kobold sewers, Shan-To-Kor, another multi-part quest, good for levels 4-6 or so. This model, the find a quest, hit the dungeon approach, was all DDO had for about a year. Now low-level players have access to a wilderness area that uses a new approach to recording exploits and assigning quests. 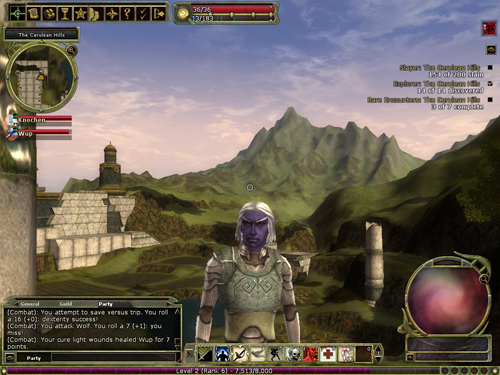 In these new wilderness areas, instead of finding a quest-giver and signing up for a quest, then completing the quest, one enters the area and explores — the closest thing to campaign-style paper and pencil Dungeons & Dragons available in the world of online games. Dungeon crawls, of course, are the usual thing in these sorts of games, so the elbow room these new wilderness areas provide is welcome.

In its immature form, the Postern Gate Wilds was a small, crudely pictured area that featured a few looping paths and a small array of ordinary low-level foes. This area was barely worth a short peek, perhaps a visit on the day one was short a few experience points from leveling up. Today the Postern Gate Wilds have been replaced with The Cerulean Hills, a remarkably beautiful vista of abandoned farmland, hills, woods, streams, and ancient ruins.

Designated for low-level characters, when one enters this area a list of exploration, special encounter and slaying goals appears on the screen. Achieving these benchmarks is worth experience — and of course it’s fun. Although DDO is focused on party quests, for this sort of exploration, solo and small group (two, three, or four characters in a party instead of five or six) work is preferable. As the area is explored, small quest-like adventures can be discovered and entered on the spot.

Along with vastly improved adventure-handling mechanisms, DDO sports new ways to find and form adventuring parties. While tools always existed to do these chores, the new version has added features that make it easier than ever to join and collect adventuring parties.

So how can one enjoy DDO? The traditional path is to join parties exploring quests one is interested in completing. One can do this as an independent adventurer, joining pick-up groups (PUGs) as one forms them or as one finds them. Alternatively, one can join a guild-a group of like-minded people who band together to make it easier to find parties to join. Some guilds are large, such as Aerenal server’s Redemption and Sacred Flame Guardians — others are small, with Mayfly lives and tiny constituencies. Some players pick quests they haven’t played yet, others make their choices based on earning experience quickly, while at times players go on quests to help others complete them. 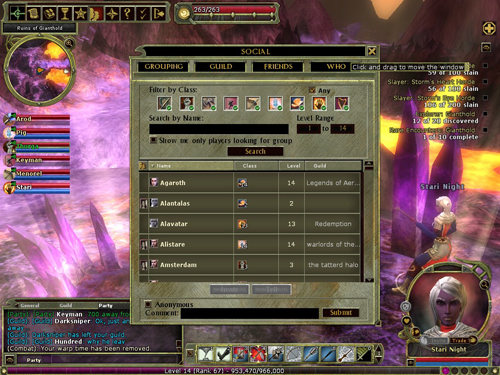 DDO has made some accommodations over the last year or so for those who prefer to play alone. In addition to some very early quests that were designed with solo play in mind, the game has added a solo option to a solid minority of quests. The new wilderness areas offer opportunity for solo play, and for the properly designed character, many quests can be completed as a party of one. The DDO community forum can provide character design information for this style of play (along with suggestions for other character concepts as well).

For some players, loot is the thing: having topped out some or all of their characters, the fun of the game revolves around finding the most interesting items for their characters. A small number of top-drawer quests provide limited and rare loot: some players specialize in running these quests over and over again to maximize their take. A sub-species of this style of play is the merchant: players who collect loot and then sell it to fellow players, often through DDO‘s auction system.

If you’re one of many who may have heard of DDO but never played — no worries. The game has definitely matured since it was released in March of 2006. Unfortunately, early adopters served as late-beta playtesters, more or less, and while the game was certainly fun it lacked certain amenities. Today there are a plethora of quests at all levels, making it possible to play different characters up to a high level while replaying only a minority of the quests — if one wishes. 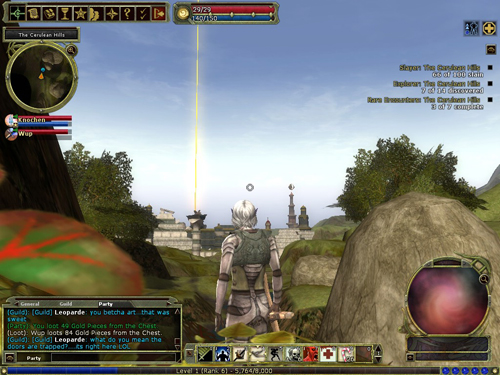 Dungeons & Dragons is a tremendously complex rules system and approximating it in an online environment is an amazing feat of programming. Turbine Software has made missteps along the way, sometimes bollixing up the system during big updates, but even that process seems to go more smoothly in recent months. Today, DDO is an amazing creation, well worth the time of anyone who ever loved D&D but finds little or no time to play in real life. The online version isn’t the same as the paper and pencil version — but it is an engaging, fun, and frequently thrilling way to play the day away.

Knochen Millerson stepped carefully out of the gate. He’d been warned that the safety of the city did not extend past its walls, but after a moment or two he let go the breath he’d been holding and relaxed. Before him swept a pastoral panorama. Although he knew they were abandoned, he could see farms that set in him a pang of remembering, for farms such as he saw in the distance had once belonged to farmers who brought their grain to his father’s mill. He shifted his shoulders under the weight of his armor. He grimaced, thinking of the cost of the stuff — it alone was worth more than his father’s mill. He was lucky to know a wealthy adventurer for whom the cost was trivial.

But he wasn’t here for the money to be made in adventuring. Knochen had heard there were undead here in the wilds. He turned to the right, following the towering city walls. It was not long before he heard a shifting of rocks and dirt, and there before him was a thing of dirty bone, a walking abomination, get of necromancy. Gripping his morningstar, he called on divine wrath against all things undead. The thing advanced one step, another, raising a bony arm to strike-then it shimmered with rays of glittering white and collapsed into dust.

Knochen released his pent-up breath. Suddenly his armor was hot and confining. “You know,” he muttered to himself, “I wasn’t sure that would work.” His teacher had assured him it would. “Had to be a first time.” He considered going back to the inn, for a quick drink and a rest, then laughed out loud. The sun was high, the sky was blue, and he was barely fifty steps from the gate into Stormreach. “The morning is young,” he said into the wind, “and my day has just begun!”

Dungeons & Dragons: Stormreach is Swords & Sorcery at its most potent and interactive. Read on and enjoy the show! To see online play instructions, visit the DDO Quickstart Guide.