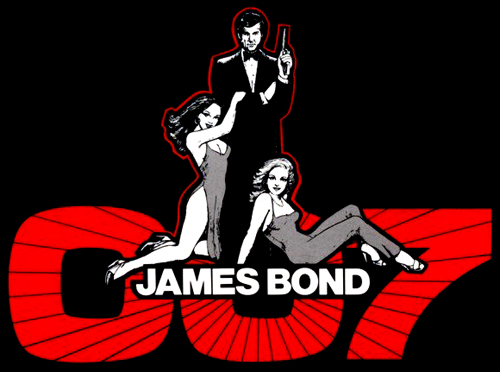 There’s nothing quite like the Bond franchise in movies. Spanning 22 “official” films including the new Daniel Craig effort in production (not including side efforts such as Never Say Never Again or the first comic attempt at Casino Royale), Bond has encompassed at least nine Felix Leiters a-leaping, six leads a-changing, five decades, three Ms a-grumping and a Mercedes in a nut tree.

The formula for such success doesn’t require a superspy to uncover, just a butt-numbing marathon of DVD viewing.

Later, with eyes reddened and hemorrhoid pads in place, it occurred to me that Bond movies aren’t actually spy movies. While Fleming’s original novels owed a lot more to Mickey Spillaine bloody-knuckled action than Graham Greene’s lean and cynical introspection, the movies based on his books jumped out of both detective and spy genres and went somewhere else entirely, both forward and back — rather in the manner of Merlin.

The Bond movies are in fact fantasies. They’re fairy tales with Aston Martins, fables with Walthers, swashbucklers with assault helicopters.

Traditional fantasy has several elements which have lain down ruts rather in the manner of Roman chariot wheels that eventually became railroad gauge in popular internet legend. Bond simply careens his armor-plated car down the same track that any number of knights-errant trod on their chargers. 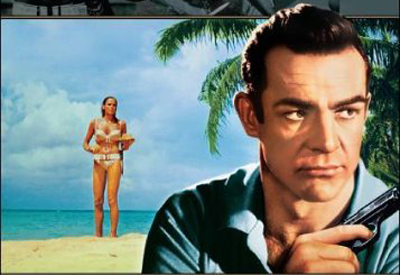 In traditional fantasy the hero is typically acting in service of his family or in defense of homeland, perhaps beginning with nothing more challenging than running an errand for lovely old mum until some magic beans find their way into the story. The Bond pictures rather cleverly combine the two. Bond presumably joined Her Majesty’s Secret Service to aid his country, but he’s really acting under the orders of “M” — a traditional mother or father figure, depending on vintage.

The briefing scenes aren’t all that different, thematically, than a fantasy hero being sent off to right some wrong by wizard, king, or father. M’s a bit of all three — in Moonraker we see a prominent portrait of King William III of England in his office (further evidence of a personal theory of mine that M is gay, but we’re getting off-topic) and he often appears as a disembodied voice over Moneypenny’s intercom.

What is a fantasy without a quest? It’s no shock to learn that in Bond films, his assignments can easily be translated into fantasy terminology: recover a ring of power (the solar cell in Man With the Golden Gun, the ATAC communicator in For Your Eyes Only, getting the bombs back in Thunderball) , attend a damsel in distress (Tatiana in From Russia With Love, Tracy in On Her Majesty’s Secret Service, Kara in The Living Daylights, Paris in Tomorrow Never Dies), avenge the murder of one of his fellowship (Octopussy, Live and Let Die), defeat an evil sorcerer who plots to dominate the world (Goldfinger, The Spy Who Loved Me, Moonraker, various iterations of Blofeld).

You never know when you’ll need a spear and magic helmet while questing, and the best place to get one is dwarves or other magical creatures. “Q” serves this purpose rather neatly in the Bond films, showing an uncanny knack for equipping Bond with something that will come in handy at a critical moment. And loading down an autogyro with the C-47s load of weaponry used in You Only Live Twice (machine guns, heat-seeking missles, rocket pods, aerial mines, flamethrowers, and Bond’s goofy-looking helmet cam) could only happen in a fantasy where the aerodynamic rules of lift are temporarily suspended or cars can also serve as submarines.

Q shows surprising precognition in his choice of equipment. The wonderful attachÃƒÂ© case in From Russia With Love would have been useless when Bond was trapped in the G-force machine in Moonraker. 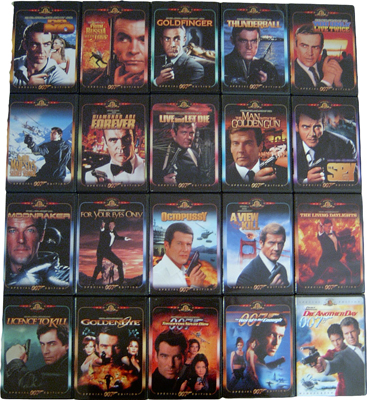 No Quest is complete without a journey to far, far away. The last thing a fairy-tale audience wants to hear is a story about home. If Bonds travel tours aren’t fantasies I’d like to know what they’re to be called. Her Majesty’s Government always seems to spring for the Presidential Suite at five-star resort hotels in Rio. And wherever Bond goes, it’s always just in time for the local Carnival or whatever loud local event that gets the natives riding floats and dancing down the street.

Customs in say Turkey, Egypt, or various points in Asia never seem to mind a British agent entering and leaving a few scattered bodies to clean up. And its amazing how much spectacular secret agent action takes place in the visual equivalent of Argonath or the Falls of Rauros, monument-and-scenery-wise.

What would a Bond movie be without the Bond Girl? They pop up in each movie, challenging, complicating, and sometimes confounding Bond’s Quest.

Bond damsels sometimes get a bad rap as being decorative rather than functional. Anyone who says so hasn’t watched enough of the series. While an occasional bubble-headed bimbo sneaks through (Plenty O’Toole in Diamonds Are Forever or Bibi Dahl in For Your Eyes Only) the majority of principal Bond girls are intelligent, capable, resolved, and often as adventurous as Bond. The very first Bond girl, Ursula Andress in Dr. No, was depicted as brave and athletic, cowed neither by Bond or the frightening rumors about Crab Key. Domino kills her tormentor with a speargun, Tiffany Case is solid sterling, and Melina Havelock gets her revenge with a crossbow. There are a lot more dynamic Ãƒâ€°owyns than genteel Maid Marians in the Bond series.

Lest the movies be accused of seeking sex appeal over substance when it comes to women, remember that Ian Fleming described Bond as a young Hoagy Carmichael. While Hoagy’s certainly not ugly, he’d come off the worse in a dimple-to-dimple deathmatch with Pierce Brosnan, Timothy Dalton, or Roger Moore. And I doubt he could out-testosterone Sean Connery, George Lazenby, or Daniel Craig. At least the Bond producers don’t discriminate.

Most of the Bond movies feature a formidable henchman who must be killed before Bond can win through, tough as dragon-scale and often with a quasi-magical ability like a dragon’s fire. Think Oddjob and his hat in Goldfinger, or Jaws and his metallic teeth in both The Spy Who Loved Me and Moonraker.

It’s not enough for Bond to pit strength against strength, he must sniff out a weakness before he can dispatch the brute. Red Grant’s brutality in From Russia With Love and the claws in Tee Hee’s metallic pincer-hand in Live And Let Die both prove to be something of a double-edged sword in service of their respective supervillains.

Interestingly, in Dr. No Bond comes face to face with a literal “dragon” in the form of swamp-crawling armored personnel carrier mounting a flamethrower. The wily Dr. No used rumors of a dragon to keep locals away from his activities on Crab Key. 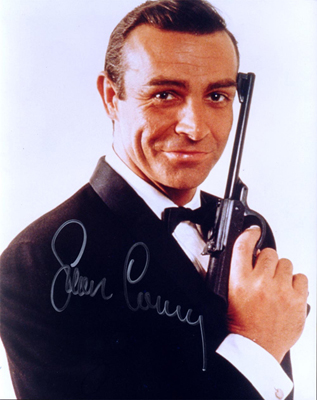 The most evil of plots are often formulated in mundane surroundings in the real world, but only the Tower of Mordor will do for a fantasy — or a Bond movie. Bond’s enemies inhabit extinct caldera, undersea fortresses, giant space stations, mountaintop towers, always building on an epic scale that would satisfy even Peter Jackson. The good guys had fortresses of their own, of course. Literal castles were used in Octopussy and You Only Live Twice, and Bond’s been forced to climb a tower any number of times, perhaps most spectacularly in For Your Eyes Only with the Greek Orthodox Monastery.

Keeping true to the mythic GÃƒÂ¶tterdÃƒÂ¤mmerung tradition, the villain’s lair must be destroyed in spectacular fashion at the end.

Riders to the Rescue

Most of the Bond movies feature brave allies charging in to join battle at the end, whether it’s Navy Seals, ninjas, Space Marines, attack helicopters, or plain old garden variety commandos — often to complete the destruction of the villain’s lair. We even get to see the mighty Pashtuns literally ride in on horseback at the end of The Living Daylights but I have to say that I much prefer the good old Royal Navy in Tomorrow Never Dies. It’s the Anglophile in me.

While not as easy on the eyes as Bond girls, a villain is required to complete the fantasy. Their motivations are often primal: lust for power or gold, gluttony, lechery, hubris, megalomania, or simply nihilism.

Bond villains are almost magical in nature, often utilizing science in a manner that crosses the border into sorcery (the extinction virus in On Her Majesty’s Secret Service or the electromagnetic pulse weapon in Goldeneye), or befuddling the superpowers into destroying each other so that they might take over the smoking rubble. While their plans don’t stand up to cursory scrutiny, they’re certainly good enough for a rousing fantasy and some terrific speechifying. 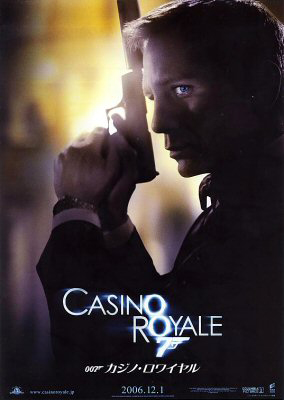 Though it’s not generally talked about as much as choosing the next Bond girl, the producer’s choice of characters to play the villains have been mostly wonderful. Rich, textured, capable actors often bring a much-needed gravitas to an essentially silly role. A resolute, stylish villain helps win audience sympathy for Bond as much as he hinders Bond throughout the plot, often in proportion.

Of course Bond must get into a duel right out of Errol Flynn by the end of the movie, whether it’s a cat-and-mouse hunt through the house of mirrors in Man With The Golden Gun or a Wagnerian battle on the gantry in Goldeneye. The more altitude the better, though perhaps Moonraker took matters a shuttle flight too far.

Back to a Conqueror’s Bed

Bond ends an astonishing number of adventures in flagrante delicto rather than the hospital one might expect after such punishment. Starting with Honey in Dr. No in that little rowboat on, Bond always winds up his movies with a bit of foreplay, which turned into full-out coitus by Moonraker. Even if such scenes aren’t always described in traditional fantasy, they’re at least implied. I doubt the hero rode off carrying the princess in order to spend the night playing Pinochle.

Like Robin Hood, or Zorro, or King Arthur, or Conan, Bond seems destined to return again and again, though he’s now exceeded the number of major motion pictures of the rest of those combined. That’s the secret to James Bond’s astonishing longevity on the silver screen. Though he may not have appeared in the public consciousness until the 1960s, in spirit he’s as old as gallant Ivanhoe and as primal as monster-slaying Beowulf. James Bond is the ultimate fantasy hero.

E. E. Knight is a science fiction and fantasy author, best known for his Vampire Earth and Age of Fire novels. You can visit his blog here.

One thought on “Knight at the Movies: James Bond, The Ultimate Fantasy Hero”