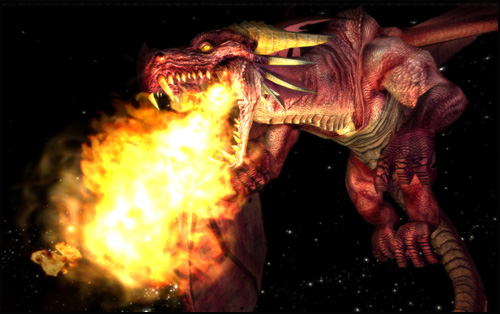 For books, movies, television shows, and even ordinary computer games, a standard review is a good thing. Such a review can tell the reader something about the novel, film, TV series, or standalone computer game that helps the reader decide whether to purchase it or tune in at the right time (or these days, download the show via iTunes). But for massively-multiplayer online role-playing games (MMORPGs), standard reviews aren’t suitable.

MMORPG’s aren’t standalone computer games one plays for forty hours and then sells on eBay — they grow, change, evolve. The tens of thousands of users who play interact with a mutable world. Rather than a snapshot, a MMORPG is a flowing river-this initial installment of my multi-part review of Dungeons & Dragons Online: Stormreach (DDO) dips into that river as it goes by and offers up the distilled results to you. Think of it as a an adventurer’s diary, a peek into another world.

Whether you are new to role-playing games, a World of Warcraft player, or perhaps familiar with Dungeons & Dragons (D&D), there is something in DDO for you. For now, I’ll assume readers are new to MMRPGs but generally familiar with Paper and Pencil (PnP) RPGs.

Technical considerations aside, take the graphics processing requirements for DDO seriously — this game is a processor-devouring beast! When you start the game, the first thing you’ll do is create a character. This avatar — or “toon” as veteran MMRPG players often say — is the imaginary hero whose role you will play in Stormreach, the imaginary city in the world of Eberron. 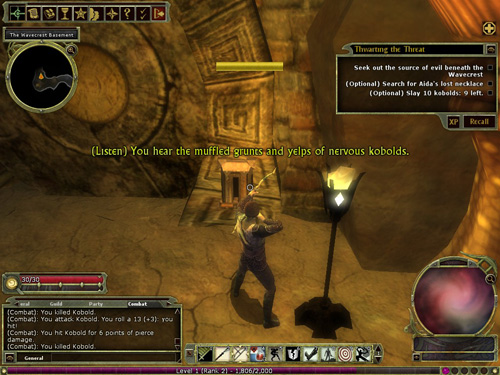 I suggest you play a fighter. Choose a human (gender and appearance of your choice) and accept the default statistics. Fighters are the easiest class to play adequately in DDO. After character creation, you will find yourself in a training area. There are worthwhile things to do here. Explore, and undertake various challenges. One of them will provide a good chunk of experience — the measure of a character’s skill and how advancement is calculated — and if you are thorough you can acquire some nice sundries, such as healing potions. Since this is not a walk-through, you will have to explore on your own. No worries: it isn’t hard, and the training area is especially full of helpful visual and auditory cues about what to do and how to do it. DonÃ‚Â¹t get attached to this character-once you learn about the game and read about character creation on the DDO message boards, you will want to create a new one.

When the game first opened some of the early tasks were quite challenging, but Turbine Software has toned down these early hurdles quite a bit. Even the most fumble-fingered should have no problem making it through the training area and the novice section that follows it.

After you’ve spoken to the sailor who takes you to the novice section you’re in for some solo play. This seems to be an unavoidable irony in this otherwise team-oriented game — 95% of the content is aimed at adventuring groups, but here at the beginning most players will go through several short quests alone. A friendly innkeeper will offer you work; the only way forward is to accept the job of moving a cask up from the basement.

Even a chore as simple as moving a cask of ale sparks adventure. Stormreach is in for troubled times! The innkeeper has kobolds in his basement and doesn’t know it. And there’s more: a foul symbol of a fouler cult was in their possession, something that burns any hand that claims it. This short dungeon crawl is a prerequisite to getting out of the inn. Once youÃ‚Â¹re out you can go anywhere, but it is still a good idea to complete other early Harbor quests. Players with a yen for getting every erg out of their playing time will want to pick all the mushrooms they can; there is a collector outside the inn who gives useful items in trade for them.

Foul cults come equipped with mad adherents, and once you have finished off the end-of-the-world maniac in the inn’s basement (don’t worry, much more believable world-ending fellows await at higher levels) you can find a few early quests to enjoy. Will you curry favor with the smooth-talking fellow posted outdoors near the inn’s entry? He offers several short quests. Skilled players can complete them solo, but for the first time you can join forces with other players to complete one or more of these short adventures. 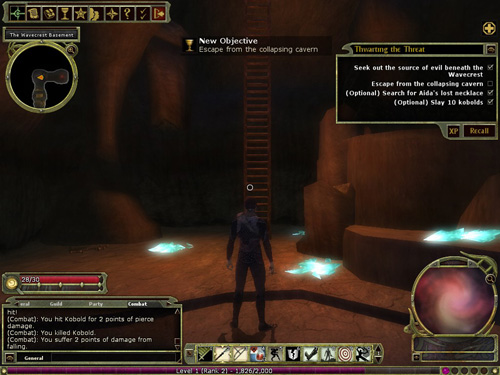 One of the early quests near to the starting inn is The Low Road, which requires more care than the short quests mentioned earlier, but it can also be run as a party. In the world of Stormreach, friends are essential even if they are not absolutely required here at the very beginning. Take note: since the population of players who need these very early quests is small and variable, one should not feel unloved if requests for assistance fall on deaf ears. There is a system for finding fellow adventurers, which new players often use intelligently but with little success.

Old timers take note: DDO characters start strong, and get mind-bogglingly tough very quickly. Naturally, so do the critters. The kobolds in the basement are weaklings compared to the free-range fellows who are common denizens in the low-level quests in the harbor section of the city. As the saying goes, “don’t get cocky, kid.”

This early area is well-designed. Novice gamers will learn by doing (and there is a lot to learn in this game) while experienced gamers can short-circuit much of the how-to adventure material and move into the main adventuring area, Stormreach.

The city is aptly named. It rains frequently. The surrounding vistas are often breathtaking. The skies feature towering clouds rendered with near-photographic clarity. Birds and butterflies flit hither and yon.

Any keen observer will notice something interesting about the architecture. Some buildings are out of scale; the place looks like mice have built a city with the scraps of a crumbling human house. Just so have people (humans, elves, dwarves, hob-errr, halfings) built Stormreach in ruins left by giants in the far-gone past. Magic moves cargo out of the harbor into the city proper. Vast angles of stone dwarf those that wander the wonderland of Stormreach, from its out-of-scale ruins to its jury-rigged bridges.

The harbor is the first area beyond the novice zone. There one will find many wonders….

Dungeons & Dragons: Stormreach is Swords & Sorcery at its most potent and interactive. Read on and enjoy the show! To see online play instructions, visit the DDO Quickstart Guide.