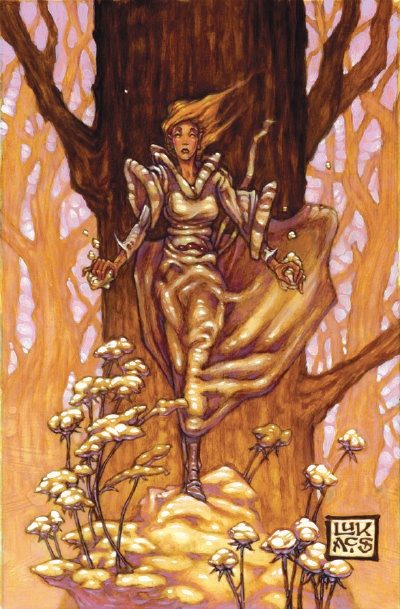 A breeze swept the forest, rich with the scent of awakening. Snow still covered the distant peaks, but the valley floor had shaken free the icy blanket, anxious for spring. Narda Elsedatter walked the shadowed paths, basket in hand, feeling disjointed and lost now that winter was dying. She paused in the lee of a gnarled fir and brushed back a strand of auburn hair, wishing she hadn’t worn her gray dress. The cloth was far too heavy for so warm a morning. Onya, younger by a handful of years, whipped up the path to meet her.

“How much farther?” Onya set down her own basket, scarcely a quarter full of poplar buds, cankerroot and young nightshade. She glared at her sister. “You promised Father we’d be home early.”

“I also promised we would gather enough willow bark to last through the summer.”

“How much more do we need?”

Narda rolled her green eyes. Onya was like a whirlwind, scattering willy-nilly, more hindrance than help. “Don’t worry. We’ll return before you starve.” A cool wind rustled around her, whispering against her cheek. Narda drank in the damp, earthy flavor. “Smell that?” She followed the scent through undergrowth and knee-high brambles, heedless of the thorns. A stone’s throw away, beside a small spring, lay a last patch of snow, gray with dust, tiny rivulets seeping from the edges. Her feet crunched in the melting drift. The cold caressed her, kissing her like the lover she had yet to know. The old power began to rise.

She ignored her sister.

A cluster of willows, the bark cracked and dry, grew beside the spring. The leafless branches chattered in the wind. Narda let the power course through her, filling her like water. She thought about a grove of willows she had once seen, red-barked and supple, the branches slender as fingers stretching out of the dark earth. She shuddered as the magic swirled round her.

“Narda…” Onya stepped back, nervous as a spring filly. “You swore.”

Narda opened her eyes. The bush, new in leaf, danced in the wind. She stepped out of the snow, her boots soaked through. “You wanted to finish, didn’t you?” She took her knife, the black handled one that had been her mother’s, from her belt and began stripping long curls of bark into her own basket. Onya inched away as if the saplings might drag her kicking and screaming into the mud.

“We shouldn’t be playing with magic.”

“It never seemed to bother you while Mother was alive.” Narda moved on to the next branch, bending it to her blade. “Are you going to help or not?” Suddenly she paused, listening. A cold shiver ran down her spine. She dropped the basket and rushed toward her sister. Around them the woods exploded. A brace of grouse hurtled skyward as a hard, driving thunder shook the ground.

“What’s happening?” Onya stared wild-eyed. Narda pulled her behind a near-by boulder and clamped a hand across her mouth. Three horsemen pounded past, kicking and swearing through the thicket. Narda waited until they were gone before releasing Onya.

“Where are we going?” Onya asked.

“To find whoever it was those riders were chasing.” Narda stopped. She felt raw pain coursing through the air. She grabbed her sister’s hand. “He’s in trouble… and so are we.”

They found the youth sprawled beside a tiny stream, face down in the marshy soil. He was cut and dirty, his blond hair matted with blood. A rangy black stallion stood nearby, standing on his own reigns. He snorted at the girl’s arrival, shying back.

“Onya, help me.” Together they rolled the boy over. Battered as he was, his tunic torn in a dozen places, she could tell he was born to wealth, a nobleman’s son no doubt. He moaned as they eased him onto his back.

“What are we going to do with him?” Onya wiped the blood off her fingers onto the stubby brown grass.

“We’re going to take him home.” Narda inched toward the nervous horse and gently freed the reigns from under his left front. The animal rolled his eyes but didn’t threaten to strike, for which Narda was enormously grateful. “Help me get him in the saddle. I don’t think we have much time before those riders return.” The trip took longer than Narda would have wished, Onya leading the stallion while she walked alongside, steadying the injured boy in the saddle. Through it all he never said a word. They kept to game paths and ridges, doubling back occasionally to confuse the trail in case the riders picked up their trace. Her arms were exhausted by the time they reached the edge of their farmyard, the sun dipping near the treetops.

“Put the horse in the barn and water him,” Narda told her sister. She eased the injured youth from the saddle, stumbling as his full weight fell across her shoulders. Though he was no taller than she, he was strong limbed and solid, far heavier than he appeared. She drug him toward the hut, the thatching gray and matted after the long winter.

Onya led the horse away. She stopped and turned. “What are you going to tell Father?”

The complete version of “Winter’s Touch” appears in Black Gate 8.