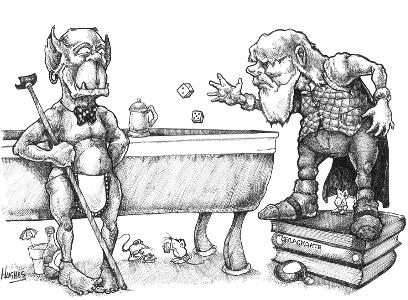 The Golden Calf was busy tonight, filled with lots of people, all well dressed and glittering. The Golden Calf attracted a mostly human and elven crowd, so Ox stood out.

I spotted him sitting at the bar, a mountain dressed in black tie. He sipped a large drink as he watched the crowd with dark eyes. I walked over to him and smiled. He didn’t smile back. “What are you doing here, Joe?” he said, his voice a heavy rasp.

“Good to see you too, Ox. Nice tux.” I climbed up on a stool and waggled a finger at the bartender. “Whiskey.” The bartender nodded and I looked back at Ox. He still wasn’t smiling. “Everything all right? You don’t look happy.”

“You aren’t the sociable type. Why are you here?”

“You already asked me that.” The bartender brought me my drink. I sipped it while Ox waited, patient. It was good whiskey. Finally I said, “You got a guy staying here, wizard by the name of Tamalar?”

He shrugged. He had a lot of shoulder to shrug. “Lots of people stay here. They like it, because we don’t let private cops annoy them.” A triumphant shout came from one of the casino tables. “Why do you want him?”

“Stole something from a client of mine.”

Ox hesitated a second, then nodded. “He’s here. Been here a week. Big tipper. Likes the seven-eleven.” He nodded towards the craps table.

“I find myself wondering why you’re letting Tamalar play.” I saw no reason to mention Bridgit’s accusations. Why upset him?

“Why not? He’s a paying customer,” he said, emphasizing the word. I ignored him.

“Yeah, but he’s a wizard. Most casinos frown on wizards. Too easy for them to manipulate the games.”

“Not this time.” Ox smiled. “The dice and all the other games are spell-proofed.” I nodded. It made sense. Spellproofing made the item immune to magic. Magic couldn’t affect them without first breaking the spell, and that would be impossible to do publicly without being noticed. Considering how many dice, cards, and other gear casinos used in an evening, it would be expensive but worth it. So how’d he get past it?

Ox glanced across the crowd, then looked back at me. “So what’d he take from your client?”

Ox snorted. “Haven’t seen it, but I’ll keep an eye out. How do you know it belongs to your client?”

“Interesting question. I’ll tell you when I find out for sure.” I finished my drink. “Mind if I mingle?” I could have just tried to break into Tamalar’s room first, but I thought I’d look him over first. Always know the enemy.

“It’s a free country,” he said, then leaned over. “But if I hear you’ve been bothering the guests, out you go.”

I gave a bow. “Your wish is my command.” I turned and headed across the casino. I paused by the cashier and changed half my fee from Bridgit into chips. What the hell. If I lost it, I’d call it an expense.

Back on the floor, I headed towards the craps table, taking care not to let the well-dressed bump into me. Normally I wouldn’t have bothered, but I had promised Ox I’d be polite. Besides, I didn’t want to get distracted.

Tamalar sat at the craps table with a tall redhead at his elbow, eyecandy covered with a king’s ransom in jewelry. Four other stiffs also clustered around the table, plus the stickman and dealer. One of the stiffs held the dice, rattling them in his hand and muttering the prayers every loser says when the rent money is riding on the next throw.

I slid into a chair just as he threw. “Seven,” called the stickman, and everyone cheered, except Tamalar. He just smiled.

The dealer passed out the winnings, and the stiff put it all down again for another pass. He threw and the stickman called out, “Seven.” Everyone cheered again, and I cheered with them.

The stiff rolled again and crapped out, and the dice passed around the table. I made a few bets here and there, just to keep my seat, but really I watched Tamalar.

He looked like most wizards I’d met: confident, good-looking, with a glint of power lurking behind bright eyes. He wore the ceremonial robes of the Order of the Ebon Darkness, one of the more notable guilds. He never looked at the woman standing next to him, except for reaching over and touching her hand every minute or so. I tried to picture Bridgit in her place, and failed.

When the dice reached him, I could almost feel the weight of the casino’s attention focusing on him. The air stunk of ozone, and I could feel the back of my neck crawling from all the observation spells focusing on the table. The stickman leaned forward a little bit, and behind him I could see the pit boss stepping forward to watch.

Tamalar didn’t even blink. He threw, got a six, then threw three more times before coming up snake eyes. He chuckled as he passed the dice. The pit boss smiled and turned away, and everyone else relaxed. Except me. If I hadn’t been watching him before, I don’t think I would’ve seen it. The whole time Tamalar threw, he didn’t touch the woman once. It meant something, but I didn’t know what.

The next stiff won a few times, before blowing it all on one last roll. Then the dice passed to me.

I scooped up the dice and pushed forward a silver weight’s worth of chips. All eyes were on me as I rattled the dice in my hand. I pulled back to throw, and out of the corner of my eye, I saw Tamalar put his hand on the redhead’s arm.

Then I felt it.

It was subtle, but I was looking for it. As I made the throw, I could feel a soft touch on my arm, guiding my hand, and opening my fingers to release the dice at just the right moment. I didn’t fight it. The dice flew down the table, bounced on the felt, three, four times, and came up seven.

Everyone cheered, and I cheered with them. The dealer pushed my winnings toward me. “Let it ride,” I shouted. Everyone cheered again, and this time so did Tamalar. He let his chips stand too. The stickman pushed the dice back to me, and once again I felt the ghostly hand rattling the bones with me. Again I threw, and again it came up seven.

This went on for three more throws. Each time I let it ride, and it came up seven each time. As they pushed more chips towards me, I looked around. The casino staff all had the professional, relaxed air of having seen it all before. Out past the small crowd that had gathered to watch I could see Ox towering overhead, watching everything. Beside him stood the pit boss with a sour frown on his face. Time to test a theory.

I picked up the dice, and glanced over at Tamalar. “Not bad, eh, pretty boy?” I said in my huskiest voice, and leered. With luck he’d think I was male.

To his credit, Tamalar managed to give me a courteous nod. I chuckled, and got ready to throw. “I’m hot. Let it ride,” I said.

I rattled the dice long enough to let Tamalar pull back his chips. Then I threw — and felt nothing. No ghost hand guided me. The dice rolled and bounced, and came up five. My next throw came up seven. The dealer pulled away my chips, and I looked over at Tamalar. “Hard luck,” he said, then turned back to the table.

I slid off my seat, grumbling loudly about bad luck, and someone else took my place. I watched Tamalar carefully as I left. He ignored me, leaning over the table to watch the next sucker throw.

I moved through the crowd around the table. Ox started heading towards me, but I shook my head and he stopped. He was frowning, though. I think he thought I was going to do something messy. I was, but not in the way he thought.

A little more maneuvering and I stood right behind Tamalar. Just part of the crowd.

Tamalar did his touching routine, the dice clattered down the table, the stickman called out another seven and everyone cheered. Except me.

Standing right behind Tamalar I saw something I hadn’t seen before: when he touched the woman’s arm, a large gem on one of her bracelets glowed faintly. I hadn’t seen it across the table with the casino lights, but it was definitely there. It had to be the bracelet. I didn’t know how it worked, but I knew that was what had been controlling my throws earlier. Time to stir things up.

As the stickman pushed the dice back to the stiff I reached into my pocket and pulled out my hexcracker. It looked like a pen. Most people wouldn’t recognize one. Ox did. I could hear him say, “Excuse me, let me by, please.”

Tamalar reached out and touched the woman’s arm. Quick like a snake I reached between them and gave the bracelet a good hard tap with the hexcracker. Ox pushed through just in time for the show.

The bracelet made a loud hissing sound and exploded. Well, not really exploded. The gem popped like a soap bubble, shooting a tower of fat blue sparks in the air.

At the same time the chump rolling shouted like he’d been bitten. His arm jerked forward and threw the dice, hard. They shot down the table and hit another patron square in the chest. The patron looked down to see two red holes in his crisp white shirt. He gave a wet squeal and collapsed. Then everyone started screaming. A large hand landed on my shoulder, and Ox shouted, “What the hell did you do?”

“Not me,” I shouted, trying to be heard above the noise. “Grab him! He was rigging the game!” I held up the hexcracker, then pointed at Tamalar.

Ox realized right then what was happening. He dropped me and started yelling for security. Through the crowd they came, mean looking fellows with thick necks and thicker arms. They started grabbing everyone at the table. The crowd broke up as people ran for cover.

Ox pushed me down and reached for Tamalar, but he was too late. Tamalar sneered. Then a hole opened in the floor. He stepped into it and the hole closed up behind him. He was gone. “Damn,” said Ox. “Take them back to my office and we’ll get this straightened out,” he said, shouting to be heard over the noise.

He stepped around the table to where the wounded patron lay. “Somebody get a healer for this man!” I got up to do just that, when I felt Ox’s hand on my collar. “Not you, Joe,” he said, leaning close down to me. I could feel his hot breath tickling my skin. “You come with me and explain just what happened.”