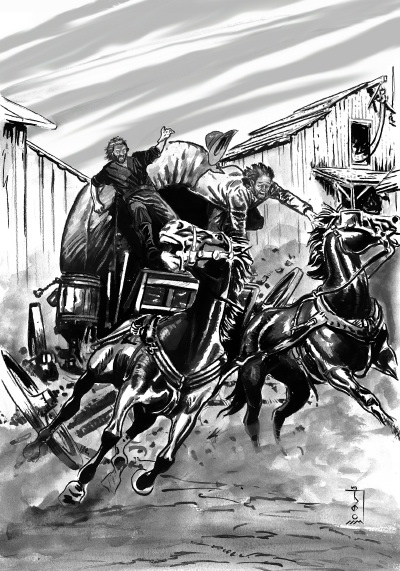 This journal has been modified only slightly. Some of the most archaic passages have been altered to improve the readability. Elsewhere, an effort was made to fill in portions of the text where weather and time had rendered the original pages illegible. Otherwise, the account stands as originally written.

The steady flow of the river was enough to reverse in hours the course that had taken us days along the road. Still, it was after midnight when the massive log drifted into the briny marshes south of St. George and became hopelessly wedged above a narrow point in the channel.

Richardson, the settler who had accompanied me on my flight from Applewash, had been drowsing since sunset, but he raised his head at the impact of the log against the riverbed. “Looks like we’re walking,” he said decisively. He stepped across the floating mass with the skill of a man that had spent years sending trees down river. My own journey to shore was much more tentative, and I twice went up to my knee in the bog before putting a boot on more solid ground.

It was two hours more walking before I saw lanterns hanging at the corners of the old fort in St. George. As we neared the bridge, I noted that someone was still awake in the yellow house where I kept my rooms, and I was very tempted to go in and sleep till morning, but I felt it was my duty to go straight on to Company House. Richardson plodded on at my side. We had exchanged few words on the long, unpleasant journey, and exhaustion had made neither of us more loquacious. As we crossed the center of St. George, he suddenly turned off down Water Street.

I stopped and turned to watch him. “Where are you going?”

“Not looking for a room,” the settler replied without bothering to look my way. “If there’s a ship leaving this harbor tomorrow, I want to know it. And if there’s one leaving tonight, I sure as hell don’t want to miss it.” He walked on down the slope and vanished around a corner. I continued on up the rutted street.

A single sleepy guard blocked my way at the door to Company House. This soldier was a stout man with a thick black mustache and muttonchops that made a thicket of his cheeks. I recognized him as Sergeant Norris, and addressed him by name, but he would not allow me to pass. Apparently, my malodorous coating of did not recommend me for an audience with Lord Haverset. However, the sergeant eventually allowed me past the front gate, and I took this as permission to hurry through the corridors straight to the secretary’s quarters.

The company secretary studied me as if men covered in stinking river mud breaking into his quarters after midnight were a common — if unpleasant — part of his daily affairs. “Whatever do you think you are doing, Mr. Brown?” he asked. “You’re absolutely filthy.”

I blinked away the fatigue that threatened to close my eyes and tried to hold myself with as much dignity as such circumstances would allow. “I need to see the director,” I said.

“He’s asleep.” The secretary’s powdered wig was perched at the corner of his desk, leaving his spotted scalp exposed to the world, but that did not seem to dent his normal air of superiority.

“Wake the director,” I replied. “The settlers are under attack.”

I expected some action at these words, but the secretary only folded his arms across his narrow chest and laced his bony fingers together. “I know of no attack,” he said, “beyond stench coming from you, which is an assault on anyone within a mile.” He craned his skinny neck as if expecting to find someone else in the room. “Where is Captain Valamont? As I recall, you departed St. George in his company.”

“Applewash. So, you became separated from the soldiers?”

“You abandoned your companions and ran back here?”

“No, I…” I pulled in a deep breath and tried to throw off my exhaustion. “Captain Valamont is the one who is lost. Dead, I suspect, he and all his men – like everyone else within ten miles of Applewash.”

“Dead?” For the first time, the secretary seemed to be giving some thought to more than just the amount of mud I was leaving on the good hooked rugs. “What makes you think that Captain Valamont has fallen?”

The sound of screaming horses drifted through my tired mind. And the smell of lemons. “I saw Sergeant Harness go down. And one of the other men, through I couldn’t tell you if it was Donnel or Sherman.” Dizziness overcame me, and I had to lean more heavily on the bench to stay upright. “I didn’t see the captain lost, but I don’t believe he could have survived.”

My words clearly had an impact on the secretary. He stood for some time, staring at me with his lips pressed into a hard, bloodless line. “And what was the cause of this calamity?” he asked after a time of uncomfortable silence. “Were you beset by natives?”

I shook my head. “Not Indians. Antriders.”

As briefly as I could, I outlined the events of the past week. The trip along the river, the days of rain, and then the rapid string of events that had occurred along Caney Creek. The loss of the men. The burning of the bridge. The desperate flight to the river. All through this narrative, the secretary watched me closely, but he did not stop me, or ask any questions. Finally, I told how I had returned to St. George like flotsam along the stream.

The old man gave a sharp nod at the end of my talk. “I see.” He left the room for a moment, and I thought he was going to fetch the director. Instead, he returned in the company of the portly soldier from the door.

“Sergeant Norris,” said the secretary, “I have an important task.”

I wondered if the secretary was going to launch an immediate military expedition in hopes of aiding Captain Valamont’s party. However, he took rather unexpected action. The secretary directed a finger my way. “Take this man to the Ebo and see that he’s held in irons.”

“What?” I stood bolt upright and backed toward the door. “Why would you…”

The secretary spun on his heels and glared at me. “You expect me to believe that trained soldiers were eaten by your fairy tale monsters, Brown?” He shook his head. “I find it far more likely that you ran from your party.”

“Why?” I backed away toward the door. “Why would I run away?”

“You said yourself how awful the conditions were. Men often are unhinged by things of the jungle.”

“Ah, but what about the Indians?”

“What Indians!” My head began to pound to that I thought my skull might literally crack. “You’re the only one that’s mentioned Indians.”

“Perhaps that because you don’t want to draw attention to your involvement with these aboriginals.”

Norris leveled his rifle at my chest. In all likelihood, the gun was not loaded, but that did not make the bayonet that glinted from the muzzle any less threatening. “Come on,” said the sergeant. “You know where we’re going.”

I punched a hand against the wood paneled wall in frustration. “This is a mistake. People are dying.”

“And you’ll answer for every one that you’ve killed,” said the secretary. “Take him away.”

The blade moved toward me. With the bayonet at my back, I left Company House and started back across town.

The complete version of “The Naturalist, Part II: An Incident at Gray’s Works” appears in Black Gate 11.