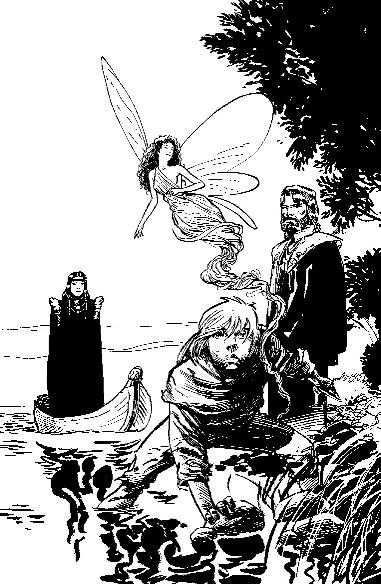 The sky over distant Avalon deepened to sapphire, and sunset clouds gilded the lake mists with the rosy hue of Welsh gold. A shallow barge glided toward my shore without need for sail or oar, for it bore Viviane, the Lady of the Lake. She smiled when she saw me awaiting her at water’s edge, and she raised a slender white hand in greeting.

I would have delighted in the peace and splendor of this tableau, but for a single discordant note — the urchin perched on the prow of Viviane’s boat like a gargoyle, leaning so far out over the water that I marveled he did not tumble in.

Though the soft twilight sang in harmony with the Lady’s beauty, it lent little grace to her companion. He was an ungainly creature whose sturdy frame would not look out of place on a young dwarf, except that it provided a nexus for ridiculously long limbs, which in turn hosted as many bruises, scrapes, and other small wounds as might bedeck a retreating army. He was, in short, a human boy.

His cat-curious gaze slid over me and then moved on, unimpressed, to settle upon a small cloud of will-o-the-wisps. Just awakening to the coming night, the tiny sprites emerged from their daylight hiding places among the shore’s reeds and flowers. Their glowing auras still wore the bright and myriad colors of petal and leaf.

The child’s face lit up with the wonder of these living lights. He leaped from Viviane’s barge, landing with a great splash in the knee-deep water, and began to give chase. Sheets of water leaped skyward with every stomp of his boots. These impromptu fountains sent the will-o-the-wisps into evasive flight. Each splash and spray shimmered with the mad swirl of the sprites’ colors. Bright droplets showered the boy and his quarry like bits of shattered rainbows.

This was, I had to admit, a reasonably clever strategy for anyone determined — and foolhardy enough — to capture a will-o-the-wisp. The tiny fairies were as quick as thought. Without such a distraction, they would be impossible to catch.

My admiration was as brief as it was grudging. The boy lunged for a particularly canny sprite, missed, and went down face first into the lake shallows. In an instant he was up and off, robust as a hound puppy and nearly as graceless.

“He has been too long among men,” I said dismissively.

“Perhaps,” Viviane murmured. Her eyes were troubled as they followed the antics of the small stranger who was her only child. She winced in sympathy as his fingers closed around a tiny green globe of light.

The boy jolted to a stop. Wisps of unruly black hair leaped into a nimbus around his face as the sprite’s indignant magic coursed through him. No cry escaped the boy, however, until he opened his fist and realized that his hard-won prey had somehow eluded him.

His mother sighed and dragged her gaze back to mine. Her smile, though wistful, was as sweet and potent as summer mead. “He is tall for his years, Oberon, but he was only ten this winter. That is not so old. Surely you could still teach him.”

Her tone held both flattery and desperation. There was magic in both these moods. The Lady of the Lake was wondrous fair, as mortals go. She was also my distant kin, and one of the few living links between Albion, the island known to mortals, and Faerie, the land in which we now stood.

And that, of course, was the heart of the matter. The bridges between mortals and fey folk were becoming ever fewer and harder to cross. Viviane brought me her son to foster, hoping this might mend the widening breach. Though I did not relish the task, I honored the lady and would do what I could, for both our sakes.

When her barge sighed to a stop on the white-pebbled shore, I took her hand to help her alight, and kept it in mine. Thus enjoined, we stood at lake’s edge and watched the antics of the child upon whom so much rested.

“He is to be the next knight of the lake,” Viviane said softly, giving words to the matter before us. “I have seen it.”

I had never questioned her visions, and did not do so now. It was difficult, however, to envision this scruffy urchin as a great and peerless warrior — Lady’s champion in this world and in hers. And yet, this was precisely the marvel I must bring into being.

“Is there music in him?” I asked, getting to the task at hand.

Uncertainty touched Viviane’s eyes, and with it a certain wistful sadness. Until recently the boy had lived with his sire in Les Britain. In truth, Viviane probably knew little more about the child than I did. But the Lady of the Lake accepted this lack without complaint, as she did all the duties that came with her high and lonely rank. “Test him and see,” was all that she said.

She called to the boy. He sloshed ashore dutifully enough, and he dropped properly to one knee when Viviane presented him to me. Someone, apparently, had schooled him in the rudiments of courtesy.

“Lancelot, have you a song to sing for King Oberon?” she asked tentatively.

This request seemed to puzzle the lad, but he shifted one shoulder in an insouciant shrug and then hauled himself to his feet. “If you wish it, Lady.”

He linked his hands behind his back. Without further preamble, he began to sing:

“The knights return from battle to the castle of their lord,
And each thing to its proper place their victory hath restored.
Their enemies sleep in their graves, the horses, in the stables.
A feast is spread upon the boards, the wenches, on the tables.”

“Thank you, Lancelot. That will do for now,” Viviane interjected hastily. Her countenance was oddly strained, as if she was uncertain whether to laugh, scold or shriek.

I did not share her dismay, for the boy could actually sing! There was something of fairysong’s magic in his voice, and much of the beauty. Purity of tone and soul shone through the song he clearly did not understand. The contrast of innocent singer and bawdy tune made his gift shine all the brighter.

Still, I could not twist my tongue into words of praise. “That was remarkable for a lad of ten years,” I said wryly. “I can only imagine the poetic joys that await us when he turns twelve.”

Viviane sighed and turned to the boy, who stood watching us with wary eyes. Apparently he was sharp enough to know himself rebuked, even though he might not grasp the particulars. She gave him a reassuring smile. “While Oberon and I speak, you may gather some of those reeds you were admiring earlier.”

His uncertainty vanished before this prospect like mist at midday. “The javelins?” he inquired eagerly.

“The very same. Take care where you hurl them, though.”

He darted off, and Vivian passed one hand over her face. “I don’t suppose his song was quite what you had in mind,” she said ruefully.

She tried to look convinced. “Then I will leave Lancelot in your keeping. The hour grows late, and before I leave for Avalon, I would pay my respects to your queen.”

An image flashed into mind — golden lighting searing across the blackness of a nightstorm sky. Such was Titannia’s beauty, and such, of late, her mood. “You would face such danger without a champion?” I grumbled. “You would be better advised to wait until the boy’s training is complete.”

Viviane’s blithe laughter mocked my complaints. Her mirth faded quickly, however, as a boyish war whoop recalled her thoughts to her son. With obvious reluctance, she summoned Lancelot. He stopped just short of hurling one of the long, cat-tailed reeds and trotted over, weapon in hand.

“It is decided,” she said gently. “You will foster with King Oberon.”

The complete version of “The Knight of the Lake” appears in Black Gate 3.

One thought on “Fiction Excerpt: “The Knight of the Lake””