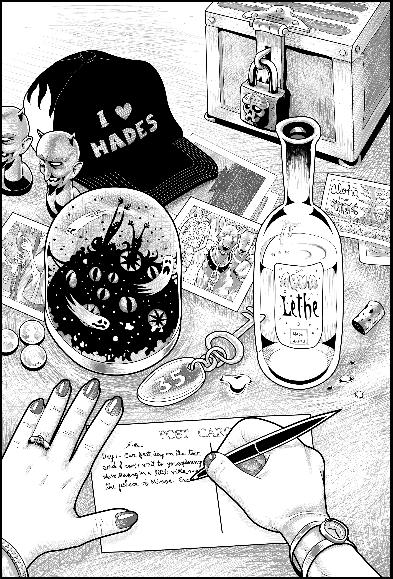 Day 1 — The first day of our tour and I can’t wait to go exploring! Customs took an eternity, although I couldn’t imagine why. After all, it’s not as if anyone would want to sneak in. All the guidebooks warned us about the bureaucracy here, but it’s worse than even Dante said.

We’re staying at a little place near the Palace of Minos. Except for the toilet, it reminds me of the villa in Sicily where we stayed last year. Dixie, our travel agent, warned about the plumbing in these First Circle places, so we were ready to “rough it.” Fortunately, the bathroom has a deadbolt, so we should sleep soundly.

Otherwise, everything’s like the brochure said, although more run down (isn’t it always like that?). I know you thought we were crazy for signing up for this, but I really am glad we took Dixie up on her “Five Rivers of Hades” package. I mean, Euro Disney sounded like fun, but I just couldn’t stomach the idea of dealing with the French for a whole week.

Postage is a lot less than we thought it’d be. I’ll write daily so you won’t miss a thing.

Day 2 — Well, we haven’t done any sightseeing yet, but the shopping is incredible! It seems everything’s dirt-cheap here because the economy’s such a mess. The shopkeepers say it’s been like this since burying the dead with riches “Egyptian style” went out of fashion. With no money coming in they had no choice but to open the doors to tourists. A little like Eastern Europe after the Iron Curtain fell.

Of course we’re paying in American dollars, which is great for haggling with the locals. I got you and Erwin a pair of “Go to Hades” T-shirts for a steal. Herman said it was the least we could do to thank you for feeding the cats while we’re away.

Naturally, there’s all kinds of other stuff to buy here. Just two trips to the hotel gift shop and I’ve already got a suitcase full of keychains, baseball hats, these cute scratch and sniff posters, and some really unusual local crafts.

I also picked up a snowglobe that’s, well, I guess “disturbing” is the right word. It really has to be seen to be believed, although you might want to be sitting down when you do. Still, the second I saw it I said to myself “Honey, you just have to get that for Ravone!”

(You know which Ravone I mean, don’t you? The manicurist at Lucille’s that wears black all the time. The one with all the piercings).

The snowglobe came with this beautiful antique oak box. Fantastic workmanship but with some weird scorch marks on the inside. I started making a big thing about the damage, but the guy at the antique shop sweetened the deal with this old fashioned padlock that clamps the front. The thing is just massive and looks like it belongs on a dungeon door somewhere! I guess he’d been trying to unload it for a while because I hardly had to haggle with him at all for the box, globe, or padlock.

Of course, there’s a million other things here, stuff you’d never believe. I’m taking a lot of pictures, which should make it easier to explain when I get back (although I bet the guys at the photo lab are going to have a lot of questions when I pick my film up – ha ha!).

I have to say, though, that this place is turning out to be paradise for a shopaholic like me.

The complete version of “The Grand Tour” appears in Black Gate 6.