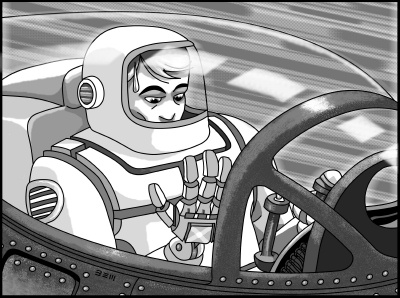 Major Havoc was about to die. Again. The poor bastard was locked into a cycle of death-rebirth-death as irrevocably as any transmigrating soul in the Upanishads caught up in an endless round of samsara.

He fire-walled the throttle and rolled inverted, goggled eyes staring out the perspex bubble canopy. The ground whipped past far below, a distant blur of blue-greens and mottled browns.

The Major should have been ecstatic. He was putting the XF-11 through its paces, an activity that had never failed to lift his spirits before. But something was eating him now. The fact that he was unable to identify exactly what it was made it all the more maddening. He responded to this nagging sense of unease by lighting the afterburners and going vertical, leaving his worries somewhere down there with his plummeting stomach.

Major Havoc climbed for ten seconds, then yanked the stick into his belly. The sudden movement compressed his frame into the seat. Extreme g-forces caused his vision to redden, then clear, as the fighter pulled through a 90-degree change-of-axis. Some deft stick-and-rudder and the jet snap-rolled upright. He cut the afterburners and throttled back to three-quarters power.

The Major was on the last leg of his flight path back to base. His eyes tick-tocked their practiced pattern over the cockpit instrumentation: attitude, altitude, TAS and oil pressure gauges all read normal. So why the sense of dread, stronger now than ever?

The unease had gnawed at him all morning, an irrational feeling composed of equal parts dÃƒÂ©jÃƒÂ  vu and impending doom. It was an emotion difficult to rationalize or quantify, for it seemed to exist in the absence of any originating cause or triggering event. Yet there was no denying the force of this peculiar, persistent emotion.

“I’m just tired, that’s all.” The Major passed a gloved hand over his face, massaged his forehead. Nothing a good night’s rest couldn’t cure.

“Delta Base to Angel One.” The radio crackled with the voice of Ground Control. “What’s your ETA to waypoint Omega?”

He keyed his mike. “Arriving at waypoint Omega in five minutes.”

“Roger, Angel One. Delta Base out.”

Was he imagining things, or did he detect a stifled giggle in that imperious radio voice?

“What the hell is wrong with me?” Major Havoc’s voice sounded tinny and brittle in the close confines of the cockpit.

He pushed the stick forward, dropping the nose of the nimble little fighter. The altimeter needle revolved counter-clockwise, steadily counting off the meters as he descended.

The Major was down to tree-top level when he spotted the dog — holding steady off his left wing, three times the size of the aircraft, pacing him with long, loping strides.

“Delta Base to Angel One. We have you in visual.”

He looked up and there was Ground Control five-hundred feet dead ahead: a boy in a fluorescent-orange jumpsuit, squatting beside his AVR gear. Next to him lay a long, narrow landing mat — Delta Base.

Major Havoc’s pulse went ballistic. His heart was thundering in his chest like a panzer division roaring out of the Ardennes but then that couldn’t be right, could it? Because he had no heart, no blood, no fragile body of bone and flesh to ride an iron-crossed steel charger into an apocalyptic landscape of fire-blackened trees and swirling snow. No indeed. His body was a carefully calibrated machinery of fire-resistant polymers and solid-state electronics.

I’ve got to run, he thought wildly. I’ve just enough fuel to get out of effective AVR range. A quick bank to the right, then full throttle for fifteen minutes…

Instead, he keyed the mike as his landing gear thumped down.

The complete version of “The Final Flight of Major Havoc” appears in Black Gate 9.

One thought on “Fiction Excerpt: “The Final Flight of Major Havoc””