By William I. Lengeman III 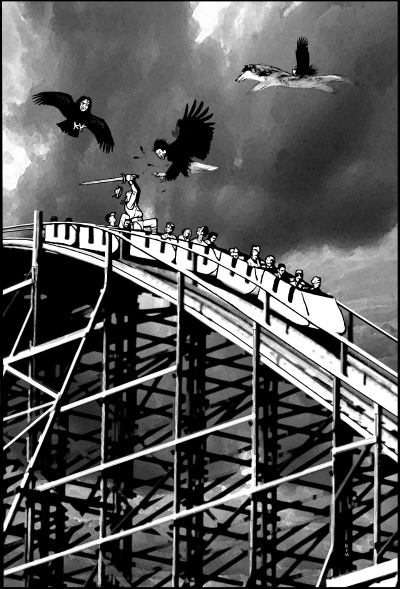 “Dad, how much longer?” Lucy whined.

Bob Dogoil mopped his brow with his sleeve, watching heat waves shimmer above the asphalt. The line seemed to stretch into eternity.

“About a billion years.”

“Hey, you guys wanted to ride.”

“Shut up,” Rudy interrupted. “You never even rode one, dumb ass.”

It was slightly less than a billion years later when Bob and Rudy slipped into the front seat. Lucy had chickened out. Bob felt a familiar thrill as they cranked up the precipitous first hill, hung suspended at the summit forever and rocketed downward.

They were leveling out when the first harpy struck, diving from out of the sun and taking them by surprise. It slashed with long razor-sharp claws, nearly decapitating an old man in row four.

Bob leapt to his feet as they closed in. He stepped gingerly among the cars, balancing precariously and drawing his great broadsword. He hadn’t used it since the incident with the troll in the donut shop. It felt awkward.

There were four harpies – horrid creatures with bodies and wings like great birds and the head and shoulders of women – women so hideous that they would have done wonders for Medusa’s self-esteem. They wheeled and circled, eyeing his sword, looking for an opening. One veered out and around, approaching from the rear. Another hung back. It was mounted upon a great slavering wolf as large as a horse, with wicked looking fangs longer than his hand.

Bob scrambled nimbly to the rear, carefully dodging the other riders. He wished that he’d spent less time watching football and more time at the health club. The harpy feinted downward as Bob swung. It gave a horrid shriek as he followed through with a graceful and unexpected reverse down stroke, neatly severing its wing. It fell to the asphalt, screaming, as the coaster clattered on.

He struggled to keep his footing, moving forward just as another one took a large chunk out of a soccer mom’s shoulder. The creature veered awkwardly as he slashed at it delivering a mighty blow that split its head down the middle. Foul smelling gore sprayed his face. He ignored it, catching the third harpy on the back swing, opening a great gash across its midsection. It shrieked and fell.

He saw them then — riding from out of the western sky, their great steeds snorting and panting and their burnished armor gleaming in the sun. He turned to face the fourth and most fearsome of the creatures, but he knew they were coming for him. He fought bravely, even though he knew how it would end. He would be in The Great Hall before the day ended.

The last thing he heard — as life drained from him and he fell into blackness — was the woman in the second row.

“I thought Pirates of the Caribbean was good, but this is something else.”

The complete version of “The Entrance of Bob Into Valhalla” appears in Black Gate 11.