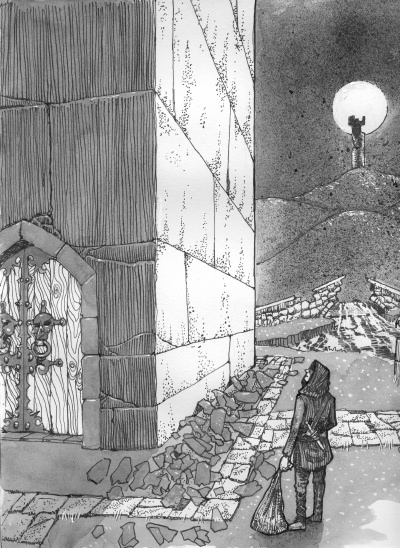 Garren climbed out of the freezing river and stared across a short stretch of shattered slate at the black tower. Rain mixed with hail slashed his head and shoulders, and gusts of wind tore through the air like damned spirits set free to torment the living. Black on black: the tower made night itself seem gray.

Garren hoisted his pack over one shoulder and dashed across the jumbled stones. The base of the tower drove straight into the earth; its blocks were huge and their crevices smoothed over with mortar. “It might as well be glass. I’m supposed to climb this?” he said.

“You said you were good,” breathed Tolus’s disembodied voice.

“I never said I could fly.” Garren rubbed his hands in a vain attempt to warm them. “It would be faster to go in through the door.”

“I told you, there are… mechanisms. They would recognize only me.”

“Mechanisms can be disabled. Besides, how could a machine tell one man from another?”

“They are not machines. They are contrivances of my Art.”

Garren waggled his fingers at the empty space where Tolus’s voice came from. “Then you disable them.”

“Death has made you touchy,” Garren muttered.

“The window I left open is this way.” Tolus’s voice came from the left.

Garren circled the base of the tower until he saw high above him a flickering glow. The icy rain clawed at his face. “It would have to be at the top, wouldn’t it?” He dropped his pack and dug through his odd assortment of tools. Stiff-toed shoes, powdered talc, spikes, hammers, chisels, rope – twice as heavy with all the water it had drunk — a jar of resin, an ice-axe, a special belt.

Garren pulled a close-fitting hood over his head and strapped a knife to each calf. “It absolutely must be tonight? Because it will be impossible as long as this rain lasts.”

“Let me put it another way: I would fall and die.”

So they waited an hour while the rain slackened, then half of another for the drizzle to abate and the stones to dry somewhat in the chill wind. This was the most wretched climb Garren had faced in years — which for him was saying a lot.

With the hammer and chisel Garren tested the mortar: harder than he would have liked, but workable. “Can I expect any patrols?” he said as he hammered out the first handholds. “I make this a two-hour climb.”

Garren threaded five pitons onto his rope, took a deep breath, and started his climb. That ring of slate around the base — clever touch. A bed of knives. Even a short fall could cripple. No plinth at the tower’s foot, either. The tower’s sides had been smoothed by weather and workmen. And the stones would be freezing.

Several pouches on his belt held the powdered talc. First he hammered out a hold, then dusted the surface with talc — to dry it and provide traction for his fingers — then inched a little higher and hammered out his next hold. Every ten feet he drilled a hole in the mortar for his pitons, then descended a few holds so he could lean against the rope and rest his arms. During rests he rubbed a warming salve on his fingers. Champions, but this climb was a torment.

“Ah, if you fall the rope catches you,” said Tolus. “Clever.”

“Unless the pegs break, or the rope snaps, or I break my back coming to a stop,” said Garren. “If you don’t mind, I’m trying to concentrate.”

Higher up, the wind gusted. Just a few more minutes, he told himself. A few more minutes and you can rest, have some wine, warm yourself by the fire… He stopped in the middle of carving out a handhold.

The ghostly lisping of wind and stone.

“Tolus, you said you died before nightfall. Who lit the fire?”

“Well. Yes, there is someone in the tower.”

“Does this person have a name?”

“I do not know. But he is dangerous. You will have to be careful.”

Garren gritted his teeth. “It’s the man who killed you, isn’t it? You led me up here on this fool’s quest for gold so I could avenge you!”

Garren hung there for a few seconds. Wind tore the warmth from his body. “Do you know,” he said, “I think I will climb back down, and cross the river, and forget all about you.”

“Don’t be ridiculous. You’re almost there.”

“I just realized: why should you care about my safety? You’re already dead.”

“You can’t stop now,” said Tolus. “I haven’t the time to find someone else!”

Garren squinted up at the window. He did have his knives… “Remember: double,” he said, and continued his creeping zigzag up the wall until he was even with the window. If there was anyone in that room, he would have heard Garren’s hammering a long time ago. “Peek through the window and tell me what you see,” he whispered.

“I can’t fly any better than you,” whispered Tolus in his ear.

Garren edged along the wall. Just beyond his fingertips the warmth of the room spilled out and was sucked away by the night. He heard nothing but the wind in his ears. He stepped wide, planted his toes on the sill, then swung himself around and dove into the room, rolling to his feet with knives in hand — or rather knife, since his numbed fingers had dropped the other blade.

The complete version of “Soulthief” appears in Black Gate 11.