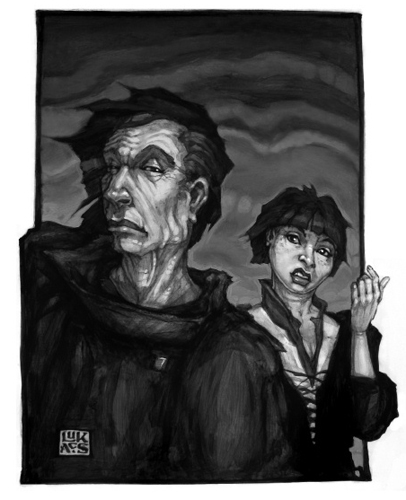 We continued across the marketplace until we came to a place that proclaimed itself, in a large banner, as CHARIS’ DISCOUNT EMPORIUM OF DELUXE WONDERS. A smaller and wordier sign said, No job too large or too small! Satisfaction guaranteed! Charis and his team of expert thaumaturges will not rest until — The rest was water-damaged and I couldn’t read it, but I doubted I was missing much. A still smaller but more convincing sign said firmly, No Credit.

We pushed our way inside. As my eyes were still adjusting to the dimness, the shopkeeper rushed up to us, his blunt pale features stretched to display a somewhat oily professional friendliness.

“Honored sirs, young lady, what can we do for you?”

“You can bring me Charis,” Morlock said.

I could see reasonably well by now — well enough to catch sight of a convincing replica of Morlock’s head staring down at us from a tall, tomblike display case. I turned around to point it out to Thend, but he’d already noticed it.

“I am afraid that Charis sees no one, absolutely no one, unless it is absolutely necessary,” the shopman purred. “It is one of his little ways. I am Stokkvenn, his chief assistant master thaumaturge-in-training, and I can almost certainly meet your needs. In all honesty, you might prefer to deal with me. Charis is a brilliant man, the greatest wonder-worker of our establishment, but his manners are a trifle — Excuse me, sir, but have we not met before? I’m almost sure of it.”

Morlock pointed at the head glaring down at us. Stokkvenn looked at it, back at Morlock, and said, “Charis will be out to see you in a moment.”

Stokkvenn disappeared into an inner room. Presently the same door opened and another man emerged. He was almost the opposite of Stokkvenn — tall, sharp-featured, somewhat distant in his manner. And he was pale — Death and Justice was he pale-skinned! At one time I’d thought Morlock was the whitest man in the world, but next to him this other fellow was practically translucent: ice-white skin, yellow hair and eyebrows, green squinting eyes.

“Morlock Ambrosius,” the newcomer said. “This is indeed a pleasure.” If it really was a pleasure, his face didn’t show it.

“I hope — At our last meeting — K-k-k-k-k. Or quasi-meeting, rather — ” Charis’ face hardly moved as he spoke, but from his strange disjointed speech I gathered he was terrified of Morlock.

“Do you have what I came for?” Morlock asked briskly. “If so, we need not consider the past.”

“K-k-k-k-k. Yes. Quite. Indeed, I got it right away. But months have passed since then, and I thought… K-k-k-k-k. Matters may have changed, you see. So I purchased an update, at great expense and for your personal convenience.”

“Hm,” said Morlock. He reached over and tore out one of Charis’ eyeballs.

All right — I admit it. I screamed. So did Thend, no matter what he says.

Morlock turned toward us, displaying the eyeball in his hand. Except, now that I brought myself to look at it, it didn’t really look like an eyeball. More like a glassy imitation of one. The black glittering shreds hanging from the back of the eyeball didn’t look like nerves, or anything that had grown inside a human body. Thend, obviously nerving himself up, stepped forward to take the thing and look closer at it.

“It’s glazed clay,” Morlock said with something like contempt in his voice. “The iris is painted on!” Apparently that was bad.

He turned back to the thing he had called Charis and, drawing his knife, split it open from collarbone to belly. I managed to keep from screaming this time, but only barely. It was babbling all the while about ” — an investment — k-k-k-k-k — as it were, in time, to pay off royally — ” but, increasingly, I couldn’t look on the thing as human. It stopped speaking and moving when Morlock drew something out of the gap in its chest — a scroll of some sort.

“You can tell?” I asked faintly.

“I taught Charis how to make a decent eyeball,” Morlock grumbled. He unrolled the sheet in his hand and glanced at it, adding, “The life-scroll isn’t in his handwriting. And the stupid thing couldn’t even speak properly. Not the product of the establishment’s greatest wonder-worker.” “But maybe,” I guessed, “the chief assistant master thaumaturge-in-training?”

“Exactly,” Morlock approved. “Thend: get him.”

Death and Justice, that annoyed me. Sure, Thend was big and strong for his age (almost fifteen). But I was about to point out that, just because I was twelve years old and a girl, it didn’t mean I couldn’t slap someone like Stokkvenn around and make him like it. Then I looked Morlock in the eye (those flaring gray irises were not painted on) and I decided it wasn’t the strategic moment to say so.

“Fasra,” he said to me, “drop the brass shutter over the window, bolt it and stand by the door. Here.” He tossed me the knife in his hand and said, “We may have company soon.”

I was tempted to ask who’d died and made him God.

On the other hand, I’d learned the hard way that sometimes it’s smart to listen to someone who knows more than you do. I bit my tongue and did as he asked. He busied himself behind the counter, pulling things out of drawers and looking at them.

Pretty soon Thend appeared, dragging a squealing Stokkvenn behind him. “He was trying to go out the back door,” Thend said to Morlock, and tossed the shopman up against the counter in front of Morlock.

“We may have guests. Will it hold?”

Morlock turned to Stokkvenn. “You wrote this,” he said coolly, waving the life-scroll of the dead golem.

“I’m not asking you; I’m telling you that I know.

You keep the register here — the ink is still on your hands — and the life-scroll was written in the same handwriting. You made this golem of your employer. Why?”

Stokkvenn quacked wordlessly for a few moments and finally said, “The Sandboys made me do it.”

If he’d said the Fluffy Puppies I couldn’t have been more surprised. In my mind’s eye I pictured a Sandboy as a friendly little figure made of sand, sitting on a beach somewhere.

“Who are the Sandboys?” Morlock asked.

“They’re the biggest water-gang in town, that’s all! They wanted to take over Charis’ business, but he wouldn’t sell. It got pretty ugly. Then the big bucket of the Sandboys sent for me and he said they were moving in, whether Charis liked it or not. There was nothing I could do about it. If I went along with them, they’d keep me on to run the business for them. I was supposed to make the golem of Charis to keep up appearances. The gangs can’t own businesses, you know — not legally.”

“Fasra,” said Morlock, “is there anyone outside?”

The shop was on the edge of a marketplace of a big city on market day. Of course there was someone outside, and I almost said so. But then I figured he meant someone in particular, so I had a look.

“Uh,” I said. “A bunch of guys with metal sticking out of their faces. They’ve got swords and clubs and they’re staring at the shop.”

“The Sandboys,” Stokkvenn said, shrugging. He was a little more at ease, looking Morlock in the eye now. Like he was thinking, Maybe you have my number, but someone else has yours.

Stokkvenn instantly lost whatever ground he’d gained. “It’s all I know!” he cried. “It’s the truth!”

“It may be all you know, but it’s not the truth. I was lured here with an authentic looking message; either Charis or an excellent forger wrote it. It accompanied an immunity-pass that must have taken a great deal of expense or effort to acquire. Why would your Sandboys take the trouble?”

“Where is Charis, the real Charis, now?”

“I don’t know. I think the Sandboys took him. He’s probably dead.”

“Unlikely. I think he’s still alive, and someone wants me to lead them to him. Any thoughts, Stokkvenn?”

“Hm,” Morlock said. He dropped the life-scroll and vaulted over the counter. “Unfortunately, I believe you.”

“Unfortunately?” Stokkvenn repeated faintly, as Morlock took him by the shoulders.

Morlock nodded at me, and I swung the shop door wide.

“Coming out!” Morlock shouted, and threw Stokkvenn headfirst, stumbling into the street. There were some shouts, and meaty thumps, and I heard Stokkvenn sobbing. A few moments later, when I peeked past Morlock out the door, Stokkvenn was gone. I never learned whether he lived or died.

“Not fair, Crookback!” someone shouted. “You said you were coming out!”

“I didn’t mean me,” Morlock called back. “Come in, if you like. I am Morlock Ambrosius; I await you.”

There was some audible grumbling at this. They’d have to come through the doorway one at a time, and apparently they’d heard some stories about Morlock that made them reluctant to try it. We’d only been traveling with Morlock a couple months, and I could have told them some stories myself.

“We’ll burn the place down!” someone shouted.

“So what?” Morlock replied easily. “I’ll walk away in the flames, and you will not follow me.”

It was true that he could do that, but Thend and I couldn’t. I hoped he was bluffing and looked anxiously at Thend. He shrugged and grinned nervously.

Morlock shut the shop-door and barred it. He went over to the lifeless golem and ripped its ears off. He did something to them — I couldn’t really see it in the shop’s dim light, and what I saw I couldn’t understand — and then he took one of them and fixed it to the doorpost with a long shining thing like a glass nail.

“Find the roof door,” he said to Thend and me.

The complete version of “Payment In Full” appears in Black Gate 12.

One thought on “Fiction Excerpt: “Payment In Full””