“Payment Deferred” is a sequel to “Turn Up This Crooked Way” in Black Gate 8. 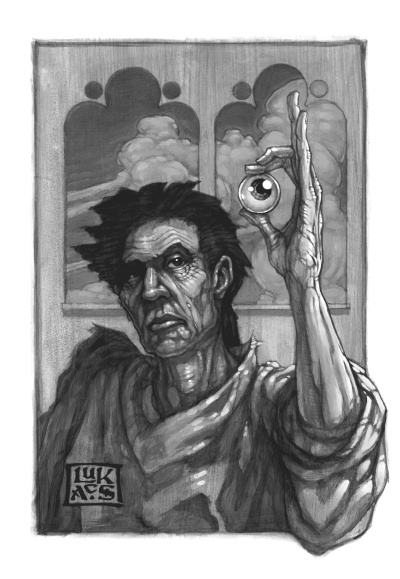 The thug’s first thrust sent his sword screeching past Morlock Ambrosius’ left ear. He retreated rather than parry Morlock’s riposte; then thrust again in the same quadrant. While he was still extended, Morlock deftly kicked him in the right knee. With a better swordsman this would have been a mistake, but he had the measure of his opponent. The thug went sideways, squawking in dismay, into a pile of garbage.

The sword point shifted to the thug’s throat. “I’m in Sarkunden for an hour. You pick me out of a street crowd, follow me into an alley and try to kill me. Why?”

“Call a Keep, hunch-back!” the thug sneered. “Maybe, I dunno, maybe I oughta — ” He raised his hand theatrically to his mouth and inhaled deeply, as if he were about to cry out.

Morlock’s sword pressed harder, just enough to break the skin. The shout never issued, but the thug sneered triumphantly. He’d made his point: Morlock, as an Imperial outlaw, wanted to see the Keepers of the Peace — squads of Imperial Guards detailed to policing the streets — even less than this street punk with a dozen murders to his credit. (Morlock knew this from the cheek rings in the thug’s face. The custom among the water gangs was one cheek-ring per murder. Duels and fair fights did not count.)

“Ten days law — that’s what you got, eh?” the thug whispered. “Ten days to reach the border, then if they catch you inside it — zzccch! When’d your time run out, uh, was it twenny days ago? Thirty?”

“Sure. Call a Keep, scut-face. By sunrise they’ll have your head drying on a stake upside the Kund-Way Gate.”

“I won’t be calling the Keepers of the Peace,” Morlock agreed. The crooked half-smile on his face was as cold as his ice-gray eyes. “What will I do instead?”

“You can’t kill me, crooky-boy — ” the thug began, with suddenly shrill bravado.

“I can kill you. But I won’t. I’ll cut your tendons and pull your cheek-rings. I can sell the metal for drinking money at any bar in this town, as long as the story goes with it. And I’ll make sure everyone knows where I last saw you.”

“There’s a man; he wants to see you,” said the thug, giving in disgustedly.

“Alive. But I figure: the Empire pays more for you dead than this guy will alive.”

“Cheap? He’s riding his horse, right, and you cross the road after him and step in his horse-scut. He’s gonna send a goon after you to charge you for the fertilizer. You see me?”

“I see you.” Morlock briefly weighed his dangers against his needs. “Take me to this guy. I’ll let you keep a cheek-ring, and one tendon, maybe.”

“The guy’s” house was a fortress-like palace of native blue-stone, not far inside the western wall of Sarkunden. Morlock and the limping thug were admitted through a heavy bronze door that swung down to make a narrow bridge across a dry moat. Bow slits lined the walls above the moat; through them Morlock saw the gleam of watching eyes.

The thug hissed his disgust at the emblems of security and anyone who needed them.

They waited in an unfinished stone anteroom with three hard-faced guards, until an inner door opened and a tall fair-haired man stepped through it. He glanced briefly in cold recognition at the thug, but his eyes lit up as they fell on Morlock.

“Money,” said the thug in a business-like tone.

“You’ll be paid by your gang-leader. That was the agreement.”

“I better be,” said the thug flatly. He walked back across the bronze door-bridge, strutting to conceal his limp.

“Come in, do come in,” said the householder effusively. “People usually call me Charis.”

Morlock noted the careful phrasing and replied as precisely, “I am Morlock Ambrosius.”

“I know it, sir — I know it well. I wish I had the courage to do as you do. But few of those-who-know can afford to be known by their real names.”

Those-who-know was a euphemism for practitioners of magic, especially solitary adepts. Morlock shrugged his crooked shoulders, dismissing the subject.

“I had a prevision you were coming to Sarkunden,” said the sorcerer who called himself Charis, “and – yes, thank you, Veskin, you may raise the bridge again — I wanted to consult with you on a matter I have in hand. I hope that gangster didn’t hurt you, bringing you in — I see you are limping.”

“Ah. Well, I’m sorry I had to put the word out to the water-gangs, but they cover the town so much more thoroughly than the Keepers of the Peace. Then there was the matter of your — er — status. I hope, by the way, you aren’t worried about that fellow shopping you to the Imperial forces?”

Charis’ narrow blond eyebrows arched slightly. “Your confidence is justified,” he admitted, “but I don’t quite see its source.”

Morlock waved a hand. “This place — your house. No ordinary citizen would be allowed to have a fortress like this within the town’s walls. You are not a member of the Imperial family. So I guess you have a large chunk of the local Guards in your pocket, and have had for at least ten years.”

Charis nodded. “Doubly astute. You’ve assessed the age of my house to the year, and you’re aware of its political implications. Of course, you were in the Emperor’s service fairly recently, weren’t you?”

Charis dwelled on it. Knotting his eyebrows theatrically, he said, “Let’s see, what was it that persuaded him to exile you?”

“I had killed his worst enemy and secured his throne from an usurpation attempt.”

“Oh, my God. Well, there you are. I don’t claim your own level of political astuteness, you understand, but if I had been there to advise you I would have said, Ã¢â‚¬ËœDon’t do it!’ I never do anything for anybody that they can’t repay, and I never allow anybody to do anything for me that I can’t repay. Gratitude is painless enough in short bursts, but few people can stand it on a day-to-day basis.”

They ascended several flights of stairs, passing several groups of servants who greeted Charis with every appearance of cheerful respect. Finally they reached a tower room ringed with windows, with a fireplace in its center and two liveried pages in attendance. Charis seated Morlock in a comfortable chair and planted himself in its twin on the other side of the fireplace. He gestured negligently and the pages stood forward.

“May I offer you something?” Charis asked. “A glass of wine? The local grapes are particularly nasty, as you must know, but there’s a vinyard in northern Kaen I’ve come to favor lately. I’d like your opinion on their work.”

“I’m not a vintner. Some water for me, thanks.”

This remark set Charis’ eyebrows dancing again. “But surely — ” he said, as the demure dark-eyed servant at his side handed him a glass-lined drinking cup.

“I don’t drink when I’m working and I gather you want me to do a job. What is it?”

Charis leaned back in his chair. “Let me begin to answer by asking a question: what do you think is the most remarkable thing about this remarkable house of mine?”

Morlock accepted a cup of water from a bold-eyed blond-haired page. He drank deeply as he mulled the question over, then replied, “I suppose the fact that all the servants are golems.”

The complete version of “Payment Deferred” appears in Black Gate 9.