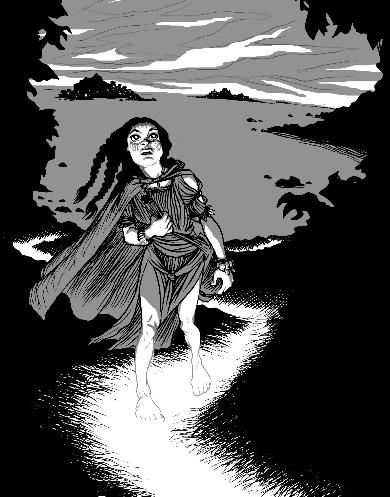 Onyx arrived at the temple while the sun still rested upon the horizon. She was early, and early would not do: the client must not suspect how urgently she needed this commission. So she climbed the stairs to the temple roof and watched the gory sunset spill itself across the sky.

Lulled by a summer calm, the harbor was a mirror for crimson and gold, sleek as a courtesan’s silken robes. Only the dark islands of the rich broke the perfection, like dying embers in a furnace’s belly. Or like new coal, ready to be set alight. Onyx toyed with the possibilities as the sun’s orb deformed, then melted below the water’s rim. Night drew close with a moist stink like the breath of the dying on her face, and small lights sparked across the islands, anticipating the stars. Lantern glimmers outlined the crowded mansions, painted the filigreed shutters of their women’s quarters, cast gold sequins across the filthy harbor surface . . . mocked the dense squalor of the city on the shore. Only one island in the harbor refused to light its darkness. The island of the dead.

Onyx gave that low dark shape a nod, acknowledging its promise and its threat. Then she went down. Her client would be waiting.

The head of House Melioch looked her over, from her callused feet to the brands on her face, and sneered. “I’d sooner send my boat boy. He, at least, has the muscle for it.”

Onyx nodded pleasantly. “He’ll make a good meal for the ghosts, then. Let me know when you’re ready for a trover. I can recover his bones for the death rites for a small extra fee.” She made as if to walk away.

“Wait!” The Melioch started to grab her arm and then, remembering she was outcast, twitched his hand back to his side. “Wait. No need for such haste. I only comment on your size.”

“Is your curse very heavy?”

He turned a wince into a glance over his shoulder, then gestured her deeper into the prayer alcove. The temple was made for such meetings, pillared, shadowed and hazy with incense, and the drone of the evening service drowned a whispered conversation nicely. Onyx obeyed the Melioch’s command and stepped further into the recess. Her elbow rubbed the bronze talons of the demon-god Phrhah, one of the less popular tricksters. The Melioch’s voice hissed inches from her ear.

“The cursed thing is weighing on my family heavily enough. Only two days after my appointment to the Inner Court my eldest son began to sicken, and now my chief wife — ”

“Yes, sir, I understand.” Onyx tried to keep the irritation from her voice. Every client thought he was the first to suffer the unlucky transformation of a god’s blessing to a demon’s curse. “Which god is it that favored your house?”

It was too dark to see the man, but Onyx felt the air stir as he made an emphatic warding gesture. His robes released the scent of oranges. Hunger pinched. “I am sure you are still favored, sir. The god?”

A dangerous thing to tell a stranger. Just broadcasting the god’s name could render the House vulnerable to an enemy’s magic. If a rumor of god’s-luck-gone-bad reached the wrong ears… But even that wasn’t so dangerous as the curse itself. The Melioch whispered tightly, “I was told you know the elder gods.”

It was not hunger that clenched in her belly now. Her voice was as thin as his when she replied warily, “I know something of them, yes.”

“Then you know it is better not to speak their names aloud. House Melioch was subordinate to a minor branch of the Velators during the Second Empire. The Velator lieges were the Governor-Princes of Eetash. They — ”

“Eetash!” It was a gasp more than an exclamation, but he heard her.

“The name means something to you?”

“Something.” Gods and devils, yes. Something, indeed.

“You know the god they worshipped, then.”

A grin contorted her face in the dark, a grin that might have been an ironic smile if irony had the strength to kill. “Yes.”

A pause. Then: “Well? Can you help me, or must I take my custom elsewhere?”

She clenched her hand around Phrhah’s bronze ankle, as if the demonling could give her strength enough for this. And perhaps it gave her something at that, for, although all common sense said she must turn the Melioch down, she heard herself say once more, “Yes.”

The Melioch gave a small sigh of relief. “Come alone to the servant’s landing at Melioch this time tomorrow. Use the names of Velator and Eetash as your passwords, my men will let you in.” He paused for a response. “You can do it tomorrow, can’t you? My son burns with fever. It must be tomorrow.”

“Good.” He nudged her arm with small leather pouch. “In token of our agreement. I’ll give you ten times that when you’re done.”

She numbly took the pouch, and without waiting for more the Melioch slipped out of the prayer alcove and was gone.

The priest folded his arms across his chest and said, “An elder god’s luck. Are you insane? Or merely drunk?”

“Not just an elder god, Mratuu. The elder god.” She looked up from the iron coins she’d stacked on his desk and gave a thin smile. “And yes, I probably am. Insane.”

The priest scowled at her, his black skin and yellow eyes more intimidating than the painted demon masks on the wall behind him. A faint breeze tickled the lamps hanging from the ceiling. It was late. She had stopped for a drink or two to bolster her courage on the way to the priest’s abode.

“Drunk as well,” he said, proving his good nose. “What do you mean, the elder god?”

“Ah, but that’s a secret worth men’s lives.” Onyx dropped uninvited into a cushioned chair and stretched out her legs.

“There are no secrets between a trover and her priest.”

She ran her hands over her face, and said nothing. He knew as well as she did this was untrue: she had never told him where she troved her clients ill-luck. Perhaps she should, this time. But both her clients’ safety and her professional reputation relied upon her discretion, and even a priest could only be trusted so far. Her fingers lingered on the demon brands scarred across her brow.

“Tell me,” Mratuu said. “Or find some charlatan to cast your spells for you, may all the gods of death have mercy on the tattered remnants of your outcast soul.”

“Damn all priests.” She dropped her head back and stared at the hanging lamps. “I was born to a House of the Middle Court. Like most such Houses, ours had connections to the earlier dynasties. And their gods.”

After a wait, the priest prompted, “And one day your head of House asked this elder god for some luck.”

“My grandfather. He was competing with another house head for a court appointment…” She closed her eyes and saw the ghost of flames. “I scarcely remember the details, what few I ever knew. It doesn’t matter. He made the sacrifices, performed the rituals, said the prayers.”

“And when the god’s blessing had done its work,” the priest said softly, “he could not bear to let it go.”

“The Khamiors. Men and boys executed for treason. Women sold for slaves. Girls turned out to survive as they could. I remember. What was the charge again? Not that it matters in the end.” Onyx lifted her head to stare at him and he smiled. “I remember when you appeared, tagging along after that sorry wreck of a trover — what was his name? — who kept the jackals off your back until you could deal with them on your own. I always suspected you were one of the Khamior survivors, you with that pretty accent you lost as soon as you could. What was his name?”

The priest’s smile was nastier than his glare. She dropped her head back and rubbed her eyes. “Illekka. And he was a jackal himself, only disinclined to share.”

“He taught you well, though.”

“Well enough to handle the demons raised by an elder god’s luck gone bad?” She said nothing. His voice dropped to a murmur. “Which god, my dark jewel?”

Silence filled the room. The silence of the temple quarter, that was a hum of chanting punctuated by bells, drums, chimes and, sometimes, screams. Onyx stared at the glittering darkness behind her eyelids.

“Aaah.” It was a drawn-out sigh of satisfaction. Onyx could hear the smile in his voice when he said, “Ehmillekt, Mother of Woe. Yes. That will make for a pretty challenge, won’t it?” He chuckled softly to himself.

She could hear the clink as he swept her coins into his palm.

The complete version of “Luck of the Gods” appears in Black Gate 7.