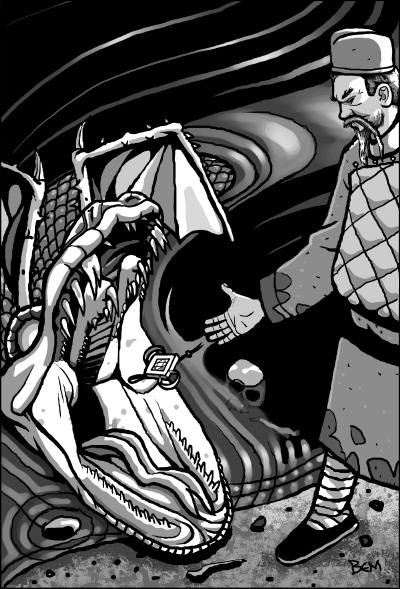 I have been many things in my life, some of which do not fill me with pride. I have swindled and deceived to earn a living. I have taken the money of people who are more honest than they are smart, and I have wasted much of it on the twin embraces of Mama Shen’s girls and my love affair with mistress food. I have betrayed the Empire in which I live, and let loose a demon upon men. Who deserved it richly, but nonetheless, letting loose demons is not right living. And at times, in those silent hours of the early morning when indigestion and mortality keep a man awake, I have wondered — will fate find a way to balance the heavy weight of my misdeeds?

I sat in the flat-bottomed boat floating down a stinking sewer beneath the streets of the city of Quishen, trying not to breathe or to put a name to what I heard bumping against the wood of the boat, on the run from the Emperor’s Guard, in the hands of the criminals and deranged who made these sewers their home, and wondered no more.

The lantern on the prow of the boat did not show much beyond us. Li Wen sat beside me. We had only just met that day, our only bond my brief friendship with her father. Yet she had risked her life to save me from the Guard, and to bring me down into this place. She must love her father very much, I thought. And hate the Guard. I thought of asking her why, but then thought better of it. Li Wen’s bravery was matched only by her ferocity.

She had led me down into these tunnels when the Guard chased us from the docks, and we had crawled through endless miles of darkness until my knees were sore and our pursuers long gone. Li Wen had known where she was going, and eventually I had sweet rest by the side of an underground river. She found a whistle that had been cached there, blew it, and said that we should wait. After a while, a splash and a glow of light had revealed the boat steered by the bearded man who now poled us along the silent waterways. I saw from our first meeting that Li Wen knew him well. They had that way of talking without speaking.

We passed through small tunnels, where our pilot had to duck lest he lose his brains, and huge caverns where our lantern’s dim light could not even reach the ceiling. It was a wonder that the city of Quishen stayed standing, given that its very foundations were riddled with this maze. Everywhere there were the sounds of water: the splash of the pole, a constant drip, drip of water falling, an occasional distant splash. We approached a tunnel at right angles to our own, and our pilot had to pole hard to stop us being dragged off down it. As we passed I could hear a rush and a crash, the sound of water falling down a considerable height. The canals of Quishen were famous. Here I saw their dark cousins, taking water from one part of the city, and back to another, keeping everything in balance. And keeping the night soil from the streets.

“People live down here?” I asked. “Not that I mean to sound rude, for I am grateful for the sanctuary, but… there is a certain…”

Li Wen looked at me bewildered. “Do you know what he means, Linghao Ho?”

“The air is — ” I said. “That is it could be… maybe it is simply the way the wind, ah the draft, is blowing, ah… well, it is less than sweet. In fact,” I went on, warming to my subject, “it has an odor as fierce as a dragon’s breath. To be blunt: it stinks.”

Linghao Ho laughed. “Stay down here long enough, and you will not notice it, Dao Shi. For now though, breathe in deep, relish it, let the stench coat your mouth like a fine wine. It is the stink of freedom.”

I could see the poetic thrust of his remarks. Nonetheless, I continued to breath as shallowly as I dared, because poetry could not stop the onward charge of violent sickness.

“The Underworld is a world of our own,” Linghao Ho said. “It may have been planned and dug by the servants of the emperor many generations ago, but now they do not know its ways, and we do. We live here in freedom from those above who would enslave us.”

“You are all sought by the Guard?”

“For one thing or another, yes. The people of this place have many stories, Dao Shi. There are those who have rebelled against the Throne, hiding lest they be stuck on a spike in the town square as an example to others. Those who have less, ah, principled disputes with the authorities. Some who have killed for money, some who have killed for love. Some whose trade it is to move things — or people — around the city, without those above seeing what they move or where. No one comes into the Underworld without our knowing. No one conducts business through here without us taking our share. But be warned, you are a stranger here, and will be viewed with suspicion, so don’t go asking questions. There are many here who would give answers you would not like.”

“And since I left…” Li Wen left unspoken a question that I could not guess.

“It is. And more than that, there’s talk of an informer now too. Everyone looks at everyone else sideways, wondering if they are the one.”

“A foolish place to be an informer,” Li Wen said, and she spat over the edge of the boat. “It would be a short but bloody career.”

“It will be when we find him. There are whispers that it is a young lad, Da Hsing. Most here keep their past folded away like a secret parchment, but he more than most. But they are whispers, nothing more.”

“Excuse me,” I said. “This talk of informers is very exciting, and of great interest I am sure. But I noticed, just before, you said Ã¢â‚¬ËœIt’s still here then’. I do not wish to seem nosy, it is not my place — but what is still here?”

Linghao Ho laughed without humor, and the boat shook. “You have not told him, Li Wen?”

I could not see her face, but I could hear the embarrassment in her voice. “We were in something of a rush. The Guard were hard on our heels, we were trapped at the docks. I had no choice, Linghao Ho. It was bring him here, or die.”

“Dao Shi, if we had waited a moment longer, the Guard would have had you. There was nowhere else to run, we were trapped. If I didn’t have to bring you down here, I would not have. So don’t start getting indignant just because there’s a demon that — ”

“Sorry, Li Wen, my ears are still ringing from the echoes in this place. For one moment I thought that you said Ã¢â‚¬Ëœdemon’.”

“Well, we don’t know it’s a demon,” Linghao Ho said reasonably. “Some form of beast or monster. We don’t know if it’s of this world or another.”

“Ah all is well then,” I said. “Li Wen, you are forgiven. I’d have hated to be trapped in a stinking sewer full of criminals with a demon stalking me. But a monster, or maybe beast, or maybe seven headed serpent bird with clawed feet, that is a different matter. I could not be happier.”

Li Wen leant out from the boat and grabbed at a rock that stuck out from the tunnel wall, forcing us to stop. “Linghao Ho. Please paddle us back the other way. My ungrateful friend here wishes to rejoin his friends in the Guard.”

The bearded man laughed, shook his head, and resumed poling the boat along. Li Wen sat back in the boat and glared at me with disgust.

“There,” Linghao Ho said. “All friends again. And Li Wen, no talk of friends in the Guard. With the rumors about this informer, that’s not a wise turn of phrase.”

“So why are you here, Li Wen,” I asked. “You are no refugee from the Guard, are you? You were happy to meet your father at the docks, in public.”

Linghao Ho laughed, but did not say anything.

“I have… friends here,” Li Wen said after a moment.

“Just friends?” Linghao Ho asked, and laughed again. Li Wen stared at him and he choked off the laugh, and looked down at his shoes.

We paddled on through more dark tunnels and the constant drip, drip of water. The tunnel opened up into a larger chamber. A man sat on a ledge, watching us go by. He had an arrow nocked and ready. Linghao Ho raised a hand, the bow was lowered, and a hand raised back. Then we were gone, back into the tunnels.

“Since you were last here? Six, maybe seven. You remember Hai Mak?”

“I regret so. A party was foraging for scrap, out in the western outfalls, Hai Mak got separated. The rest of them found him. Or rather, what was left of him.”

The complete version of “From the Heart of the Earth to the Peaks of the Sky” appears in Black Gate 11.