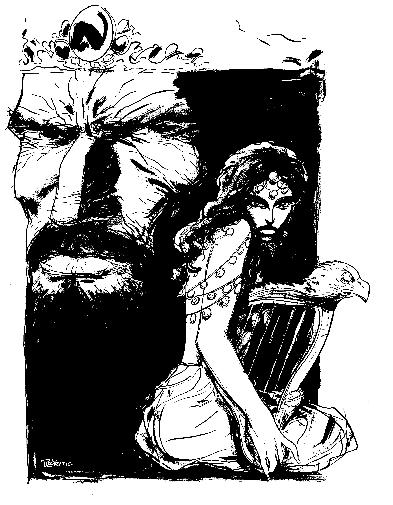 The woman in red was already kneeling when he looked up from the legate’s scroll: he couldn’t clearly see her face. What Harken noticed were thick gold chains twining her wrists and the coins sewn onto her gown in little gilded nets. Her black hair was coiled with the same bright thread. Such lavish adornment, the adornment of an expensive slave, was rarely seen in his kingdom of Midrath.

He nodded to the legate from Todorney, in an elegant tabard and shining boots, who cleared his throat and began.

“My Lord, I bear from my master, Lord of Todorney, an unparalleled gift. As for her beauty, you may judge for yourself – ” He nudged the kneeling woman with his foot and she stood. As she rose, the coins in her skirts clinked softly against one another. Their jingle brought the taste of Harken’s noontime meal sourly back to his throat.

There was little about her body that the red gown failed to reveal, weighted as it was with brass, but Harken found himself staring at the small harp she bore in the crook of her arm. Made of pale sycamore, polished, he supposed, by generations of hands, the harp crested in the head of a goshawk. Afternoon light flooded the king’s forechamber, and, in it, the goshawk eyes sparkled and stared. The pillar of the harp seemed to be inlaid with a design of dark flowers. Alarm prickled up the back of the king’s neck. Somewhere he had seen the harp before, heard this harp before…. The thunder of their boots on the steep stone stairs, the gabble of children’s voices, the plangent chords…

Behind him, he heard the creak of leather, as Meragen stirred uncomfortably. Was his steward feeling the same alarm? Could he name the memory? Harken glanced a question back, but the big warrior, once a comrade-in-arms and now a trusted counselor, shrugged in return. Apparently, Meragen saw nothing particularly alarming about the woman or her harp.

“- and her harping will not disappoint you,” the legate continued, “but my lord will agree she is a fitting gift when I tell you, this is Griah, the last living child of the Mage King, Rekared.”

The legate paused briefly for effect, but it was probably not the effect he expected. Harken gripped the pommel of his sword, as memories flooded his mind. Meragen and the other men crossed their palms against spells, with instinctive foreboding.

“Surely I mistake my lord of Todorney,” the king began crisply. He noticed, without changing his tone of voice or expression, that the ambassador cringed a little. “We keep no slaves in Midrath, and we employ no henwives for the working of spells.”

“Indeed, my lord,” the legate began, visibly angling for the right words, “but this is no ordinary woman. This is the last of a race of demons!”

Harken responded in the same even tone. “Surely that which was done to the family of Rekared and his mage folk sufficed to the gods. In the boneyards and brothels of my city, it’s passing hard to tell them from my own people.”

The men in the forechamber – Meragen, the two marshals, and his justiciar – all had ridden to war with Harken and he felt them straighten at his words. They’d followed him through hell to save Midrath from the swords of Rekared, both real and illusory.

Thirteen years before, the ragged horde came spilling across the river, south into Todorney and west to Midrath. Harken had never asked his vassals to fight a battle in which he did not risk his own life; to march through rain that did not wet his own head; or to eat weevilly bread, when he himself ate fresh. And now he would take no unseemly prize, by virtue of being king.

He glanced at the woman, half-consciously hoping to find an expression of surprise or gratitude, but the woman with the harp only stared.

Harken continued. “In that spirit, we gratefully accept the gift of this woman’s freedom. Please convey our pleasure to my lord of Todorney.”

The legate, affronted but firmly in charge of his dignity, bowed again and left. Harken sank back into his chair as if exhausted, staring at the shadowy flowers on the harp. Now he remembered. They were no pattern at all but a dark random stain.

“My steward will have your chains removed,” he began, some of the crispness gone from his voice. “He will prepare the papers your manumission requires, and arrange a suitable annuity. Not that these things suffice, as recompense, but – ”

“It is not so easy to free me, Harken,” she interrupted quietly. She had a sweet low voice but it was empty of emotion, as were her eyes, though brightly outlined.

Meragen stepped forward, pulling on his tangled, gray-streaked beard, and stared at her impertinence.

“Freed or not, you speak to the King of Midrath!” he barked, but Harken ignored him.

“I’ve been a slave of one lord or another in Todorney these thirteen years, since you stormed the fortress at Dorgatt, the day my father died.”

The furrows deepened between the king’s eyes.

The complete version of “The Flowers on the Harp” appears in Black Gate 6.