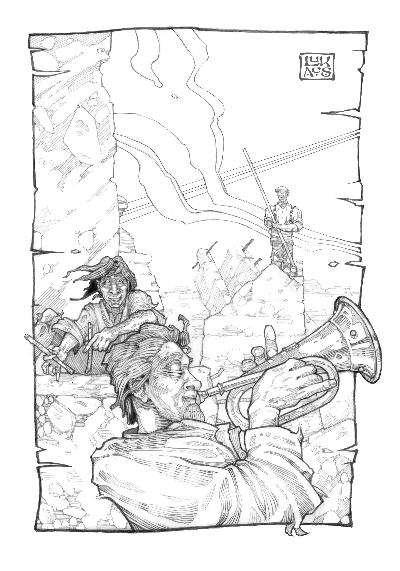 We were the Eight-Bar Band: there was me and my bugle; and Timson, whose piano had no top and got rained on from time to time; and Steve, the front-man and singer. And then there was blissed-out, autistic Hambone, our “percussionist” who whacked things together, more-or-less on the beat. Sometimes, it seemed like he was playing another song, but then he’d come back to the rhythm and bam, you’d realize that he’d been subtly keeping time all along, in the mess of clangs and crashes he’d been generating.

I think he may be a genius.

Why the Eight-Bar Band? Thank the military. Against all odds, they managed to build automated bombers that still fly, roaring overhead every minute or so, bomb-bay doors open, dry firing on our little band of survivors. The War had been over for ten years, but still, they flew.

So. The Eight-Bar Band. Everything had a rest every eight bars, punctuated by the white-noise roar of the most expensive rhythm section ever imagined by the military-industrial complex.

We were playing through “Basin Street Blues,” arranged for bugle, half-piano, tin cans, vocals, and bombers. Steve, the front-man, was always after me to sing backup on this, crooning a call-and-response. I blew a bugle because I didn’t like singing. Bugle’s almost like singing, anyway, and I did the backup vocals through it, so when Steve sang, “Come along wi-ith me,” I blew, “Wah wah wah wah-wah wah,” which sounded dynamite. Steve hated it. Like most front-men, he had an ego that could swallow the battered planet, and didn’t want any lip from the troops. That was us. The troops. Wah-wah.

The audience swayed in time with the music, high atop the pile of rubble we played on in the welcome cool of sunset, when the work-day was through. They leaned against long poles, which made me think of gondoliers, except that our audience used their poles to pry apart the rubble that the bombers had created, looking for canned goods.

Steve handed Hambone a solo cue just as a bomber flew by overhead, which was his idea of a joke. He didn’t like Hambone much. “Take it, Hambone!” he shouted, an instant before the roar began. It got a laugh. Hambone just grinned his blissed-out smile and went gonzo on the cans. The roar of the bomber faded, and he played on, and then settled into a kicky lick that set me on an expedition on the bugle, that left me blue in the face. Steve gave us dirty looks.

Then a stranger started dancing.

It was pretty shocking: not the dancing; people do that whenever they find some booze or solvents or whatever; it was the stranger. We didn’t get a lot of strangers around there. Lyman and his self-styled “militia” took it upon themselves to keep wanderers out of our cluster of rubble. She was dirty, like all of us, but she had good teeth, and she wasn’t so skinny you could count her ribs. Funny how that used to be sexy when food was plentiful.

And she could dance! Steve skipped a verse, and Timson looked up from the book he keeps on his music stand and gawped. I jammed in, and Hambone picked up on it, and Steve didn’t throw a tantrum, just scatted along. She danced harder, and we didn’t break for the next bomber, kept playing, even though we couldn’t hear ourselves, and when we could, we were still in rhythm.

We crashed to an ending, and before the applause could start, we took off on “Diggin’ My Potatoes,” which Steve sang as dirty and lecherous as he could. We hopped and the stranger danced and the audience joined in and the set went twice as long as it normally would have, long after the sun set. Man!

Steve made a beeline for her after the set, while I put away the bugle and Timson tied a tarp down over his piano. Hambone kept banging on his cans, making an arrhythmic racket. He only did that when he was upset, so I helped him to his feet.

Hambone smiled, but to a trained Hambone-ologist like me, it was a worried grin. The stranger was staring at Hambone. Hambone was looking away. I led him to his cave, guiding him with one hand at the base of his skull, where he had a big knot of scar tissue – presumably, whatever had given him that lump had also made him into what he was. I made sure he went in, then went back, nervous. Hambone was a barometer for trouble, and when he got worried, I got worried, too.

The stranger had peeled Steve off of her, and was having an animated conversation with Timson. Uh-oh. That meant that she was a reader. It’s all Timson ever talked about. He was a world-class bookworm. He’d moved into the basement of what was left of a bookstore-cafe, and was working his way through their stock. You never saw Timson without a book.

“Anemic Victorian girlybook — that’s all that was,” he was saying, when I caught up with him.

The stranger shoved his shoulder, playfully. Timson is a big one, and not many people are foolhardy enough to shove him, playfully or otherwise. “You’ve got to be kidding me! Are you some kind of barbarian? Emma is a classic, you bunghole!” My sainted mother would have said that she had a mouth on her like a truck-driver. It turned me on.

Timson’s retort was derailed as he turned to look at me. He said, “Brad, meet Jenna. Jenna, meet Brad.”

I shook her hand. Under the dirt, she was one big freckle, and the torchlight threw up red highlights from her hair. Mmmm. Redheads. I had it bad.

“Hell,” Timson said, slapping me on the back hard enough to knock a whoosh of air out of my lungs. “Brad is the best trumpet player for a hundred klicks!” Jenna raised a dubious eyebrow.

“I’m the only trumpet player for a hundred klicks,” I explained. Talking to a stranger was a novel experience: we got to recycle all the band jokes. She smiled.

I don’t know where she slept that night. She was pretty good at taking care of herself – there weren’t hardly any wanderers around anymore, and I’d never seen a solo woman. When I retired to my shack, I was pretty sure that she’d found herself shelter.

“This is how all of you survive?” she asked me the next day. I’d taken her out prospecting with me, going after a mountain of concrete rubble that had recently shifted after a baby quake. I had a good feeling about it.

“Yeah,” I said, wedging my pole in and prying down hard. If you do it just right, you start a landslide that takes off a layer of the pile, revealing whatever’s underneath. Do it wrong, you break your pole, give yourself a hernia, or bury yourself under a couple tons of rebar and cement. I’d seen a movie where people used the technique after some apocalypse or another. A plane went by overhead and stopped the conversation.

“But it’s not bloody sustainable,” she said. Her face was red with exertion, as she pried down hard.

I stopped prying and looked around pointedly. Mountains of rubble shimmered in the damp heat, dotting the landscape as far as the eye could see.

She followed my gaze around. “OK, fine. You’ve got a good supply. But not everyone else does. Sooner or later, someone, somewhere, is going to run out. And then what? Turf wars? The last thing we need around here is another damn war.”

It wasn’t the first time I’d heard that theory. Lyman and his buddies were particular proponents of it. They drilled half-ass military maneuvers in their spare time, waiting for the day when they’d get to heroically repel an invasion. I told her what I told them. “There’s plenty of rubble to go around.”

The complete version of “Beat me Daddy (Eight to the Bar)” appears in Black Gate 4.

One thought on “Fiction Excerpt: “Beat Me Daddy (Eight to the Bar)””