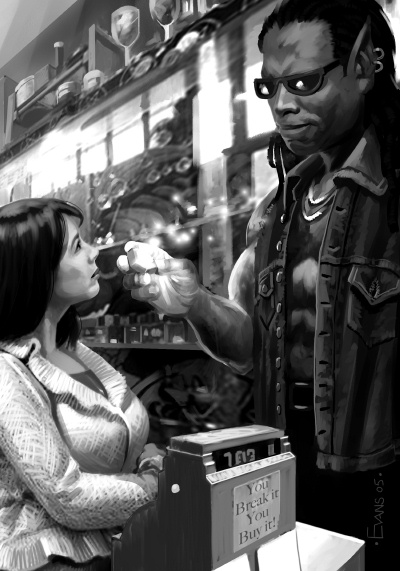 Clearspring Treesong Watkins looked out at the rain-soaked high street, or as much of it as she could see. The window was rather crowded, what with the sodium lamps, geodes, mobiles of dancing dolphins and hanging crystals. It was getting dark. She lit a lavender scented candle to brighten the last hour of the commercial day.

This was Clearspring’s (nee Denise) favorite job so far. She spent the day surrounded by magical things, and the customers were, mostly, pretty cool. The only drag was the owner and his obsession with paperwork; she could manage the till and the displays, but every time the owner came into the shop he brought a new list of questions to be answered. Then they had to close the shop and go through every single invoice until Clearspring felt like strangling him with the brown cardigan he always wore whatever the weather. Now she wafted happily around the shop, shifting things about on the shelves and getting her trailing lace sleeves damp in one of the fountains. Sometimes the shop felt like the last island of magic in an increasingly mundane world.

She turned up the volume on the whale music CD playing softly in the background to cover the traffic noise as people began their commute home, but an insistent growl of motorcycle engines still penetrated. It grew until it dominated all other sound and the display of healing crystals shook in resonance. Then the roaring stopped abruptly, and the door opened with a gust of cold damp air. A bulky figure strode in.

The visitor was not the sort of customer Clearspring usually encountered. He was tall enough for the World War Two Wehrmacht steel helmet he wore over his greasy black dreadlocks to brush the wind chimes hanging from the ceiling, setting them tinkling. As the lower chimes were a good seven feet above the floor, this had never happened before. His wide shoulders and chest were draped in a ragged, sleeveless denim jacket, beneath which his impressively tattooed torso was bare. Despite the late October dark and drizzle, he wore wrap-around sunglasses.

So did his three companions. They were all big, and they all wore variations on the leather, boots, tattoos and helmets theme. Clearspring didn’t like to think she was a prejudiced person, but she was fighting a distinct desire to hide behind the counter whimpering, “Please take all the money and go away.”

The bikers spread out through the shop and Clearspring could see that the back of each jacket bore an elaborately embroidered logo; she couldn’t read the script around it. Probably “Death to tree huggers,” or some other such charming sentiment. They were poking at things on the shelves, and muttering. The telephone was still sitting in the back room, where she’d been taking stock. She didn’t have a mobile.

The first biker picked up a box from a display rack and walked purposefully towards her. He really was disconcertingly large. The others followed, in a peculiarly well-disciplined, almost military formation, and Clearspring’s stomach started to compress her lunchtime soup back into a bouillon cube. She gripped the piece of haematite she always kept by the cash register to give her confidence. It was smooth, and solid, and cool — unfortunately it wasn’t very big. Not big enough, for example, to bash in the head of a seven-foot biker, especially if he was wearing a steel helmet. Anyway she didn’t believe in violence.

He leant on the counter, and Clearspring heard it creak.

“What are these then?” One huge grubby hand grasped a pale blue crystal, holding it only inches from her face.

“They’re Elven healing crystals,” she managed, in a voice that sounded about six years old. “If you stroke them they’ll refresh your spirit and bring you peace of mind.” She felt that she could use a whole boxful right now.

“Where’d you get Ã¢â‚¬Ëœem?” Steel Helmet said in an oddly slurring accent. She could smell the engine oil on his clothes.

“They’re made in a co-operative in the Cambrian mountains, they’re finest Welsh rock crystal.” Maybe these bikers really were interested in healing crystals. Maybe she could sell them some. Maybe she could give them some, and that would be her Positive Deed for the day. Especially if it made them leave.

“Not by elves then,” he growled. His mates loomed behind him and Clearspring felt like a mouse confronted by a family of hungry cats.

“No… no. It’s an idea. You know. Elves…” They were going to make fun, she just knew it. She gritted her teeth. Making fun was fine, so long as they didn’t smash up the shop. Or me, she thought, swallowing.

“Not real then, are they?” Steel Helmet closed his fist, there was a crack and he opened it to pour the shards of crystal onto the counter.

Clearspring watched open-mouthed as the blue remains pattered onto the countertop. That was quartz. You didn’t just crush it with your hand like… like eggshells.

“What?” she squeaked, when she could breathe.

“Not real. Not the genuine article.” He leant in closer and put one finger under her chin. She could feel the gritty remains of the crystal on his skin, and smell an odd spicy scent underlying the engine oil.

“We’d like the address of this co-operative. We don’t approve of counterfeit Elven merchandise.” He looked around at his mates, removing his finger from Clearspring’s chin. “Do we, boys?”

One of them had taken his helmet off, and was scratching his head. Clearspring shook her own head and blinked, because from where she was standing his multiply pierced ears looked distinctly pointed.

“Course if you wanted genuine Elven goods then that would be different,” Steel Helmet continued. “We might be able to help you there. Show her.”

One of the others pulled out a dark cloth pouch from a pocket, untied the drawstring and poured the contents onto the counter.

The crystals hit the glass with a distinctive, bell-like chiming, each one on a slightly different note. And they glowed. Not just blue, but variations of blue all the way from deepest amethyst to rarest aquamarine. Unable to resist, Clearspring reached out and touched one.

She pulled her hand back quickly as if she’d stuck her finger in the mains socket. A flush of warmth ran up her arm and spread right through her body, as though she had just walked out into sunshine. “Oh!”

He slipped off his shades. Clearspring Treesong looked into his eyes. They were yellow, with long, oval pupils, like a cat’s. The comforting thought that he must be wearing contact lenses only lasted until the headlights of a passing bus swept through the shop and she saw the pupils contract.

“Bloody Nora,” she said. “Excuse me, I think I have to sit down.” She descended abruptly onto the stool behind the counter, and stared from the bikers, to the crystals, and back again. She reached out her hand to touch the crystals and a large hairy paw closed over her wrist.

“I wouldn’t, girlie. They’re strong, ‘specially if you ain’t used to ’em. And we got business to negotiate.”

“You want ’em, or not? ‘Cos you can get ’em, and other Elven merchandise, off us, and only us. You can have these. A sample, if you like. In return for the address of that place in Wales.”

Clearspring looked at the crystals. She wasn’t supposed to take on new merchandise without discussing it with the owner, but these were…. well, they were genuine. And they’d sell like nobody’s business. Her eyes still on the crystals, she rummaged for the file of invoices. Wales, Wales… there.

She paused, a slip of pink paper in one hand, and frowned. “What do you want this for, anyway?”

The biker leaned over with a ferretlike speed that belied his bulk, and twitched the invoice out of her hand. “Me an’ the brothers are just going to have a talk with them about business ethics.” He folded the invoice and tucked it away in his jacket.

He put his sunglasses back on. “Ta, love,” he said turning towards the door. “Nice place you’ve got here.”

They swept out on another wave of cold, damp air. The door shut, tinkling. Opened again. Steel Helmet leaned round it, lowered his shades, and winked. “I’ll be back,” he said, and closed the door again.

The motorcycle engines roared into life.

Clearspring realized her mouth was still open. Her throat was very dry.

Tea. Chamomile tea. No, the hell with chamomile tea. More drastic measures were needed. She used a leaflet on cruelty-free products to sweep the crystals off the counter into a handy vase, cashed up, locked up, and made for the off-license.

While she was waiting to be served she suddenly remembered the suppliers in Wales. Balancing her wine, she made for the payphone.

“Cambrian Products is currently closed. If you would like to leave a message….”

Yipe. “Er… er yes, um, it’s Clearspring from the St Margaret’s shop, I’ve had…. um…” What on earth was she going to tell them?

She shoved in another coin. “There’s these guys who are coming to talk to you — I thought I’d better let you know,” she said. “They don’t want you to make any more Elven merchandise. They’re quite sort of determined, I think. Anyway, ‘bye.”

What else could she say? They wouldn’t believe her if she told the truth. And it wasn’t as though the elves had actually done anything — she bet all that aggressive clothing was a front really.

She put the crystals out on the shelves the next morning, and they were sold out within two days. She gave some of them away to friends, but the rest flew off the shelves. After what Steel Helmet had said, she limited them to one a customer, but people who bought them also bought quite a lot of other things and left with dreamy smiles on their faces. Her boss should be pleased — the till was positively bulging.

She phoned him when the place quieted. He sounded, as always, rather distant, and wasn’t remotely pleased. “No invoice? Get a grip, Miss Watkins,” he said. “You know we have to have the paperwork.”

Clearspring felt slightly depressed. Talking to her boss usually had that effect. Still, she managed to get him to offer a good price. She hoped it would cheer Steel Helmet up. Not having seen them for a few days, she was becoming convinced that he and his friends were nice people, or elves, underneath it all.

The Welsh distributor eventually phoned, and speaking rather carefully, said that he had decided they were canceling their crystals line and would she be interested in some hand-carved druids instead.

Clearspring didn’t ask whether he’d been visited by elves. She had a feeling it might not go down very well.

The complete version of “A Touch of Crystal” appears in Black Gate 9.

2 thoughts on “Fiction Excerpt: “A Touch of Crystal””