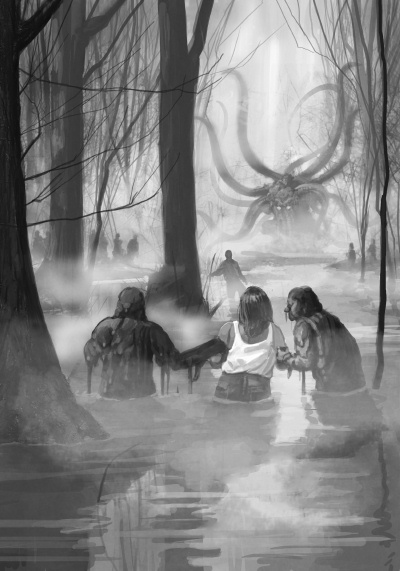 As the days lengthened, the plants started to swell in size and flower. Judy traveled all over Northern California meeting dealers and arranging to market her crop. She figured she’d clear enough to make a down payment on a house in San Francisco and even persuaded a realtor to drive all the way from the city to draw up a preparatory bid on a fixer-upper in the Haight District.

She flung open the door ready to overwhelm the man with gratitude for having come so far. Judy’d put on a tight fitting, ankle length dress that showed how lean and accessible she was because it had been a long time between romances and the guy was kind of cute.

Only she’d never be desperate enough to go for the gentleman standing on her porch. One look at the stringy white hair sprouting beneath the stovepipe hat told her who he was, but she asked anyway and prayed it was just some wandering tramp.

“I be Aphis Tupman,” the man said.

He smiled, revealing long teeth the color of ivory left in the sun to rot. Judy had been fantasizing about such an encounter ever since Machaw mentioned the man. The hair was right, but she’d pictured Tupman taller with piercing black eyes. Even if he could stand up straight, which didn’t seem likely considering his pronounced stoop, the man standing on her porch couldn’t be more than five feet even, and his eyes were milky blue.

“Yeah, so? What do you want?” Judy asked. She had pulled the door partway closed wedging herself in the remaining slit ready to duck back inside.

“Iffen you be mannered woman, you’d let me in. Sensible woman’d do the same.”

The man didn’t just sound archaic; he dressed like a figure in a daguerreotype. In addition to the stovepipe hat, he wore leather breeches, a railroad conductor’s vest complete with a gold watch chain showing, a starched linen shirt, and hobnailed boots.

“Well, I don’t claim to have the best manners, but I certainly have enough sense not to let strangers in my house at night. Anything you’ve got to say, you can say from right there,” Judy said.

Tupman put two tobacco stained fingers into his mouth and whistled shrilly. From the edge of the forest, a horde of dark shapes emerged into the clearing and started shambling towards the house.

“Sure a that are ye?” Tupman said and again revealed his yellowed teeth streaked with tarter. “Best talk’s done over drink’s what I always says.”

Judy looked past him at the line of black figures closing in on the house and stepped aside to let Tupman pass.

“Thankee,” he said and hopped across the threshold slamming the door shut behind him.

Judy went over to the liquor cabinet and got out a bottle of wine. When she offered Tupman a glass, he started to cackle like a rooster being strangled. Judy couldn’t tell whether he was doubling over chortling or merely sitting on the couch, his movements were so herky-jerky. He talked between peals of laughter.

“Got one a them Boo-joo-lays? Figure I’ll fancy that? No matter. I seen fit to bring my own stock. Best fetch some glasses. Less a course you be wantin’ it straight outta the bottle.”

Judy stood with her back pressed against the far wall. She was trying to stay as far away from the couch as possible while still keeping an eye on the man seated on it.

“No thanks. I’m not having any,” she said weakly.

Tupman’s cackling ceased as if sucked away. He was looking up at her from beneath the brim of his hat, and his eyes were no longer milky, but gleamed like diamonds.

“You don’t understand, lady. I’s offerin’ you a drink outta my bottle.”

Tupman took off his hat. Judy expected him to have a pointed head, but it was flat, so flat the man could readily balance a half-pint bottle inside his hat. The container had no label and was filled with something that looked darker than any store bought liquor. Tupman sat hunched over tapping his hat against the bottle. Watching the movement made Judy think of Machaw and his strange middle name. Tupman saw her stare and, Judy imagined, read right through to her thoughts.

“Got this here hat from your Injin friend,” Tupman said and studied the hat as if seeing it for the first time. “I said, ‘Machaw, gimmie that hat,’ and he done just that. Kind a him, weren’t it?”

“See, I had me a heap a trouble with one a his boys, while back. Had to teach the pup respect for his elders. Gave him a dose a somethin’ he weren’t likely to forget, but then I needed to be sure there weren’t no bad blood twixt me and his pa. I know’d once Machaw gimmie his namesake hat there’d be no further feudin’.” Tupman carelessly tossed the hat onto the coffee table. “Machaw got that hat from his grandpappy, he did. White fellar. Know’d him once. Shot him twice.”

“I’ll get the glasses,” Judy said and fled into the kitchen as Tupman began laughing again.

She made a beeline for the back door, but when she threw it open, a man covered head to toe in mud was standing on the stoop. He was slapping his face causing spatters of muck to spray sideways from his head. His slack-jawed mouth oozed gruel as he moaned, “Naagh, naagh, naagh.” Judy screamed and slammed the door. She could hear Tupman laughing in the living room.

She got two glasses out of the cupboard and held them in one hand. With the other, she carefully inserted the biggest knife from her utensil drawer into the top of her calf high boot.

Tupman declined to take the glasses when she extended them towards him.

“Just hold em out level. My, but your hands do shake some,” he said pouring liquor into the tumblers.

The booze was the color of blackstrap molasses and had a kerosene smell. Judy waited for Tupman to down his shot in a gulp before taking a timorous sip from her glass. The stuff was sweet to her tongue, but burned going down, and when it hit her stomach, she shuddered involuntarily causing Tupman to guffaw.

“I’ve heard you’ve got a still down in the hollow. Is this some of your brew?” Judy asked as she carefully seated herself in a rocking chair.

“Don’t go payin’ no mind to what Injins says a’ me. I ain’t got no still.” Tupman poured himself another shot and held it up to the light. “This here’s corn liquor made by the fellar what built this place. Took the barrel from that corner right yonder. He weren’t gonna have no use for it after he done took to my pond water. That makes her fittin’ sippin’ for us to do business on.”

Judy was sitting on the edge of her chair afraid that if she rocked back, the knife hidden in her shoe would cut into her leg.

“Just what kind of business do you have in mind, Mister Tupman?”

“Call me Aphis now. And just what you call this here?”

Tupman reached into his vest pocket and pulled out a stem of a marijuana plant that was just starting to bud. Judy kept silent and took another sip of her drink. In spite of all circumstance, the liquor had a delicious bite.

“Don’t rightly matter, I reckon. See, I’m gonna improve it considerable. Folks says I got me a power,” Tupman said and smiled.

“I wouldn’t have thought you knew anything about growing marijuana, Mister Tupman.”

While Judy searched for something to say, Tupman rose, put on his hat, and made his way to the door in spasmodic steps.

“No, I don’t want to do that,” Judy shouted frozen in place on her rocker.

Tupman paused a moment facing the door. When he turned around to look at her, he was grinning.

“Wants I should persuade you?” he asked, opening the door.

Still glued to her seat, Judy could see her front porch was filled with dark figures that dripped mud as they staggered in circles slapping themselves. She shook her head violently, and Tupman closed the door behind himself. Judy noticed he’d left his bottle on the coffee table. She reached out for it. Something cylindrical was floating near the top of the liquor. When Judy held the bottle up to the light and shook it, she saw it was a finger.

Judy jumped up scratching her leg with the knife in her boot when the phone rang. It was the realtor calling up to say he’d had car trouble in Ukiah and would be up tomorrow.

“Don’t bother. I’m going to be out of here tomorrow,” she said and stayed up the rest of the night packing.

The complete version of “A Covenant in Mud” appears in Black Gate 10.